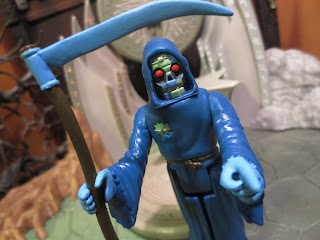 I'm just going to come out and say it: Robot Reaper is hands down the best figure releases so far in The Worst. Billed as the Robotic Harbinger of Death, the Robot Reaper calls to mind plenty of incredible cybernetic and undead bad guys such as Prime Evil from Filmation's Ghostbusters. While this version from the Midnight Special release is in a blue cloak and the main release will have a black cloak, it would be amazing to see this guy repainted with a red cloak at some point in the future. Wouldn't that just be incredible? Still, as it is, this guy is just to frigging cool. One of the things I love about this line is that these characters kind of look familiar, but they're unique creations. You feel like you might have seen them before, but clearly you didn't. I could see this guy showing up in an episode of Futurama or appearing on the box for an NES game. He's just so darn versatile. Let's take a closer look at the Robot Reaper as part of our Re-Halloween festivities after the break... 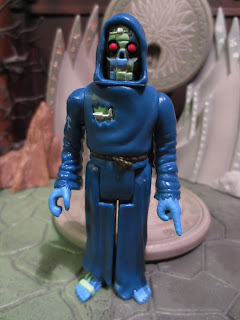 Non-Scalper Price: $90 for the entire set of 6 Midnight Special figures. 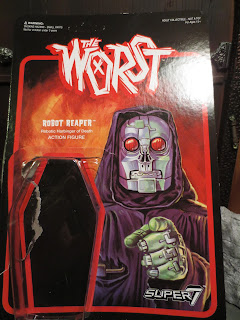 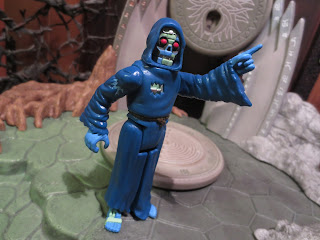 * As a faux retro action figure, the Robot Reaper has five points of articulation. Nothing special there, but it is nice that he feels really solid and sturdy. Super7 made some nice product that doesn't feel at all cheap or fragile like some of Funko's earlier efforts in this scale and style. 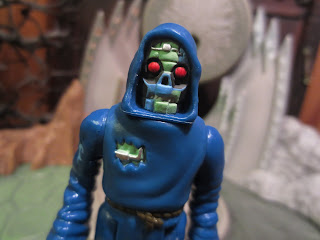 * This. Is. A. Headsculpt. Oh my gosh do I love this guy! The Robot Reaper is so crazy and terrifying that I can't help but gush over how cool he is. His face is amazing, especially his eyes. Those glowing red orbs are so flipping menacing! I've never really wanted a tattoo before now, but I'm honestly thinking that a giant picture of the Robo Reaper's head would look cool anywhere. 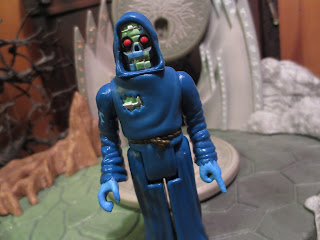 * Not only is a hooded robe a good look in general for a retro action figure but the fact that Robot Reaper has multiple tears in it, exposing his cybernetic under-structure, just takes things to the next level. The sculpting is really impressive on this guy, as is the paintwork. He's the perfect balance between the retro feel and proficient sculpting. 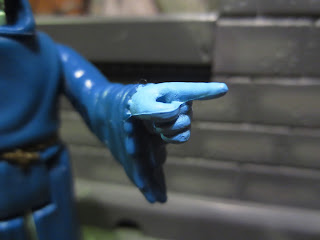 * The pointing finger really helps to seal the deal on this being the best figure in the line. Is he ominously warning someone that they're next? Is he filling in for Uncle Sam on a recruitment poster targeted at goth kids? Is this a Harrison Ford tribute? Does Robot Reaper want you to pull his finger? So many options! 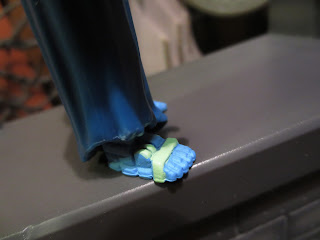 * Check out those robot feet? I love that detail! Robot Reaper's left foot is covered by the bottom of his robe, but his right foot shows off his robotic identity. I wonder what this dude looks like underneath his robe? 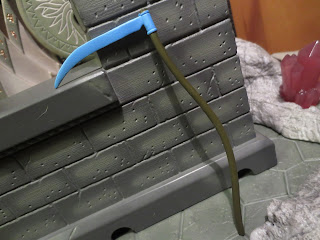 * Check out this sweet scythe. It's wicked awesome and looks great in the Robot Reaper's right hand. I love the painted blade on this thing, too. Always nice to see some paint on an accessory in this scale. It's robo reaping time, fools! 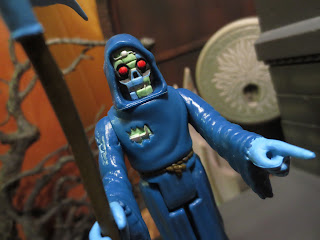 This guy is incredible. I know that not everyone appreciates these faux retro figures but when they're done well, they really manage to convey some excitement and a feeling of nostalgia. I really thought that the Gas Phantom was going to be my favorite from this series but Robot Reaper came in and cut down the competition. Cut down the competition. Get it. Because he has a scythe? yeah, whatever. This guy is 5 points of articulated Epic and is absolutely the star of the line.


Keep checking back here every day in October and the first week of November for more Toy Terror! Also, make sure to check out the Toy Bloggers United contest being hosted here this month! For more 31 Days of Toy Terror, check out my Hokey Halloween Horror page for spooky fun from 2016 and years past!
Posted by Barbecue17 at 11/07/2016