Road to Rogue One: Imperial Death Trooper #149 from Pop! Star Wars by Funko 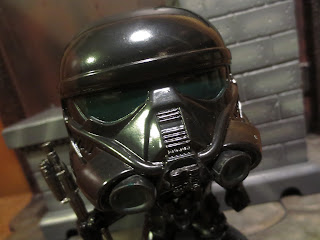 As we inch closer and closer to the release of Rogue One: A Star Wars Story, I'm going to continue to check out more cool Star Wars stuff. Today I'm looking at another item from the most recent Rogue One themed Smuggler's Bounty mystery crate: The Imperial Death Trooper. This version of the Death Trooper (Pop! #149) apparently differs from the standard version of the trooper due to his pose and the explosives strapped to the chest. It's interesting this is the exclusive as it's almost exactly what Hasbro has done with their releases of the Death Trooper; the standard version is pretty basic while the exclusive version has the explosives and chest straps. Which one will be more prominent in the movie? We'll know in under a month! In the meantime, let's check out this cool new POP! 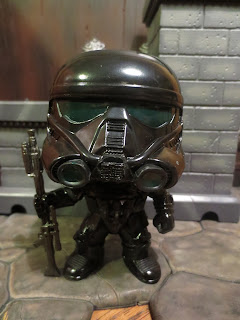 Non-Scalper Price:  $25 dollars as part of the Smuggler's Bounty box which also includes one other exclusive POP! vinyl, a Hikari Minis Darth Vader, a pin, a patch, and a Rogue One t-shirt. 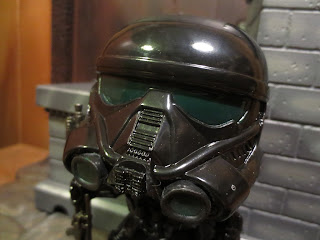 * I really do like the look of the Imperial Death Trooper helmets. It seems like almost every Star Wars film has some character who generates hype leading up to the film based on their cool appearance. Empire had Boba Fett, Episode I had Darth Maul, The Force Awakens had Captain Phasma, and Rogue One has the Death Troopers. I like the sleek look of the helmet and the green tinted lenses, which are very visible here. 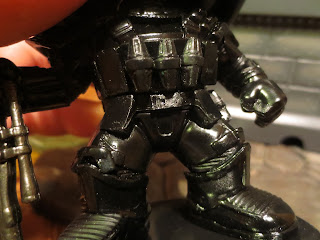 * Here's a close-up of the explosive devices on the Death Trooper's chest. The armor is pretty incredible, right? This guy was really tough to photograph due to being shiny and black, but in person he totally rocks. 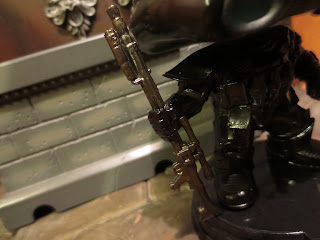 * I love this rifle. It kind of looks like the DLT-19 Heavy Blaster Rifle, but there's something different about it. I wish one of Hasbro's Black Series figures had included this beast of a blaste. 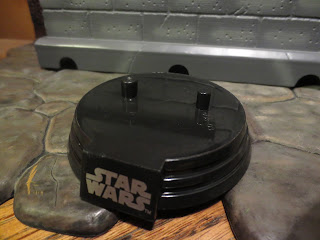 * Like the other Star Wars POP! vinyls, the Death Trooper comes with a stand. I love these things and I honestly wish more POP! licenses had them. The figures look so cool standing on them. It really adds to the presentation and to the stability of the figures on display. 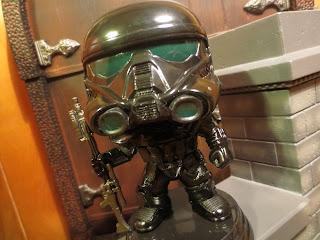 * I just like the overall appearance of this figure. Not only is the sculpting excellent but the overall pose just works. Lately a number of POP! figures have been a bit more unique looking (which I like) and a bit slimmer than the earlier figures. This guy, though, looks somewhat chunky and is posed like some of my older POP! vinyls. I just like the look as there is something very appealing about it. 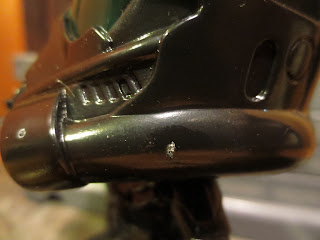 *  My figure has quite a few little dings and dents on the head. Since the Star Wars POP! vinyls actually have hollow, more plastic-like heads, they seem a bit more prone to chipping from time to time. It's not horrible, but it's definitely a flaw. 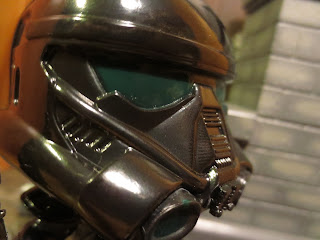 I've seen very few bad POP! vinyls and, so long as you like the style, this one's not bad either. In fact, it's pretty Great. The sleek black armor, traditional pose, and cool blaster rifle really make for an impressive Star Wars POP! While we don't yet know how cool the Death Troopers will be on screen, they certainly have a pretty impressive visual appearance and folks seem to be buying up merchandise with their likeness already. Here's another cool one you can add to the collection if you're inclined.