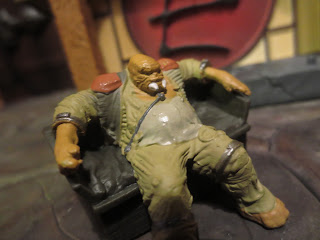 I've picked up quite a few of Hasbro's blind bagged Micro Machines (even though I hate the concept!) but this is the first one I've reviewed: Grummgar! Grummgar was one of the insanely cool aliens hanging out in Maz Kanata's palace in The Force Awakens and this is the first time he's being released in toy form. A massive Dowutin who was hooking up with First Order spy Bazine Netal (a character, along with Maz Kanata, we need in the Black Series ASAP!), Grummgar definitely brings to mind some of the older oversized Galoob Micro Machines such as the various Jabba the Hutt microfigures. I found this guy in the wild at a local Target a few weeks ago and it was actually pretty easy to find him as he's a fairly large figure. Check out a few more pics and my thoughts on this guy after the break... 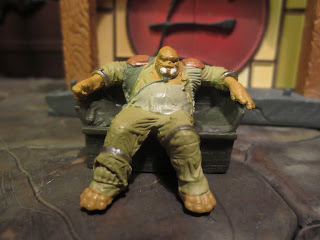 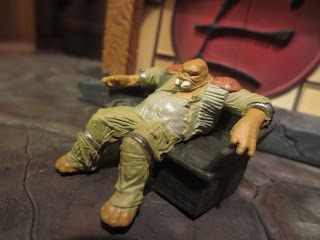 * Here's Grummgar! He's just a really cool looking microfigure. The sculpt is great and I love the paint work on him. It's really high quality! His lounger even has some cool sculpted lines on the sides to give it a unique appearance. The only thing that could improve him is if he had a little Bazine Netal to sit with him or a Maz Kanata's palace playset to display him in. 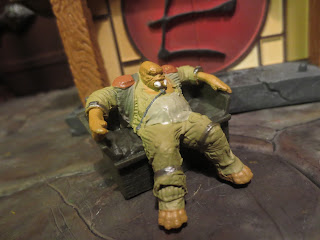 Grummgar is a really good microfigure. I wish Hasbro were adding all of these figures into three packs and offering them on shelves to give buyers a better variety, but blind bags are all the rage right now so Hasbro must be wanting to cash in on that action. Yeah, it's kind of weird to have this figure when we have no other characters from Maz's palace, but hopefully Hasbro will someday rectify that. This is a Great and a 1/2 Micro Machine microfigure and one that fans will definitely want to search out.

Hasbro hasn't even released a Grummgar in the standard 1/18th scale line yet; this is the first Grummgar on the market! I've reviewed plenty of other Micro Machines, including: