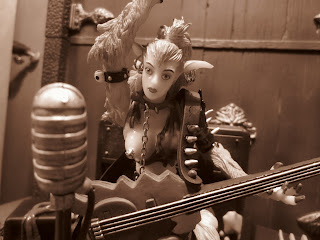 Today as part of 31 Days of Toy Terror Lives I'm checking out an action figure from a series you may have never heard of: Resurrection of Monstress by Yellow Submarine. Released between 1999 and 2001, Resurrection of Monstress was a line that married the concept of classic monsters with a pinup girl aesthetic and goth culture. I really don't remember these at all and I'm not sure where they were sold when they were on the market. I know that I discovered them through a review at OAFE a few years back and since then I've picked these up whenever I get the chance. Today I'm looking at Howling Wolfinica, a musical werewolf hunter who transforms under a crescent moon. Ready for a look at one of the craziest figures you'll see today? Then join me after the break... 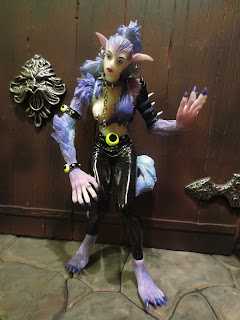 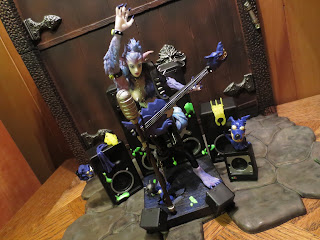 *The coolest thing about the Resurrection of Monstress line is that each figure is essentially a mini-diorama with tons of accessories. That's one of my favorite things about these figures and the reason I began to track them down a few years back. These look amazing on display as a group or individually. 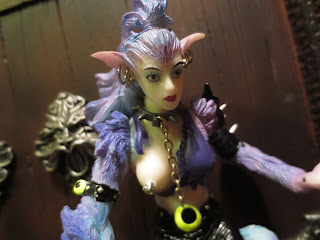 * I'm not even sure how to describe this figure as she's so incredibly unique. She not only has six metal hoops in her ears but she's also wearing a spiked color with a chain, an exposed nipple cover with a ring (kind of like Janet Jackson, I guess), and some incredibly funky hair. She also has these unusual orbs on her belt and bracelets that look kind of like moons, I guess. Or eyes. Or Funyuns. 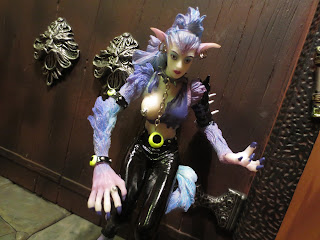 * The paint work is also astounding. This version (the Limited Version, although I don't know what made it more limited) has pale white skin and bluish-purple fur arms, back, feet, and hair. The paint effects are incredible and give this figure an almost ethereal quality. 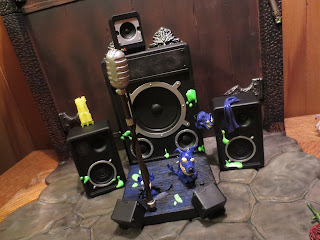 * Here's the stage set put together. Pretty wicked, right? Let's take it apart and look at it piece by piece: 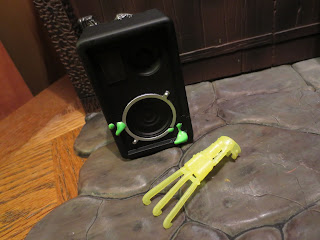 * The first of the two smaller speakers is some detailed sculpting, green ectoplsm smeared around, and a place to store a giant yellow claw that can fit over Wolfinica's wrists. It looks like one of those Wolverine roleplay accessories you buy for kids, but it's also pretty wicked due to being molded in a bright yellow plastic. What an interesting accessory for a Werewolf hunter. 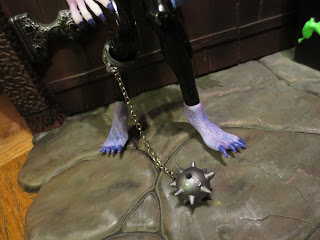 * I'm not sure whether it's to keep her from crowd diving or a fashion statement but Wolfinica has a spiked ball and chain cuffed to her leg. The cuff is removable and could fit on either leg if you so desire. The chain is a real, tiny metal chain though, and of course that's always cool. 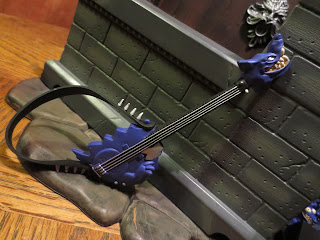 * While her bio on the packaging states that Wolfinica is werewolf hunter, she also appears to be a rocker and the guitar seems to be her weapon of choice. This thing is incredibly cool with more paint applications than you'd find on the majority of modern action figures. The spike studded strap is also pretty useful as it is actually soft and flexible to fit over Wolfinica's shoulders and head. 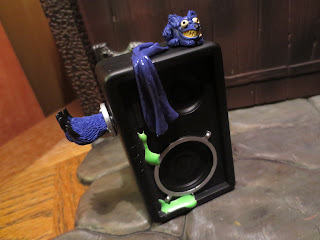 * This speaker has a towel on top (not removable) and a giant paw on the side. You can put a number of thing in the paw (it rotates) but I like to put the little purple mousey looking guy in it. Yeah, see that little purple guy with the sharp teeth sitting on top of the speaker? He looks awesome cradled up in the paw. 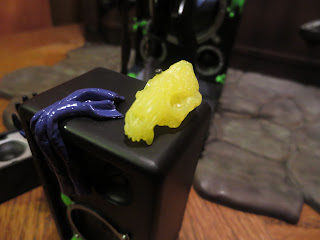 * This yellow canine skull is also hiding in the back of the speaker. It has a hole on the bottom so you can attach it to a peg inside the speaker. It's molded in a translucent plastic with the only painted elements being a nail sticking into the bone above the right eye socket. Bizarre, right? 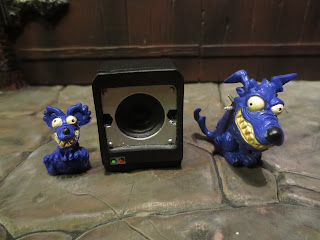 * Wolfinica has a cool little amplifier (covered in claw marks) to help pump up her jam and two little troublemakers to keep her company. The rat looking guy (on the left) and the doggie (on the right) both have killer sculpts, bulgy eyes, and humongous sharp teeth. These guys are wild and might be of interest to minifigure collectors in general. 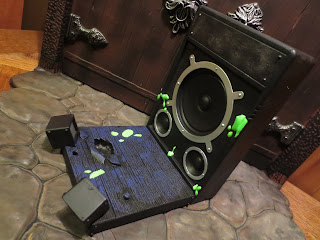 * The massive stage is incredible. It assembles from two separate pieces (the floor and the giant rear speaker) and serves as a base for Wolfinica and a few of her buddies. Not only is the speaker and stage spattered with green ectoplasm of some sort but it also has some great paint effects such as dry-brushing on the speaker to give it a weathered look and some two-tone paint work on the floor to make it look like painted wood. This thing is worth the price of admission alone, I'd reckon. 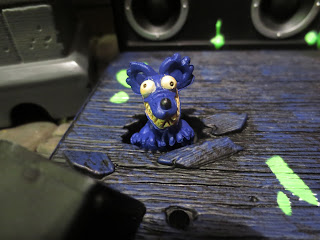 * There's a hole ripped in the floor of the stage that is perfect for the little rat guy to pop through. Incredible, right? I love the look of this rat and the stage so much! 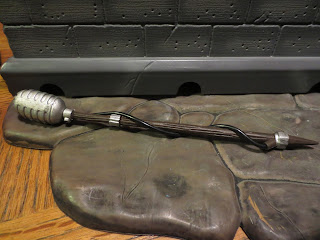 * Wolfinica's microphone is a very classic looking microphone attached to a long wooden pole. Well, I should say it's attached to a long wooden stake, as this thing is extremely pointy at the end. Maybe she uses it as a weapon when her vampire groupies get out of line? The end of the stake attaches down into her stage base at a perfect height for catching her howling vocals. There's also a flexible plastic wire that travels from the microphone down to the base. 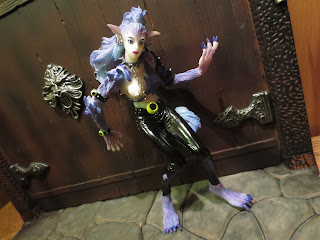 * Wolfinica only has a ball-jointed head and swivel shoulders, meaning she's pretty limited to one basic pose. Obviously a figure like this was designed to be more of a lower-end statue and display piece, but even swivel wrists would have given Wolfinica a bit more flexibility in utilizing her different accessories. 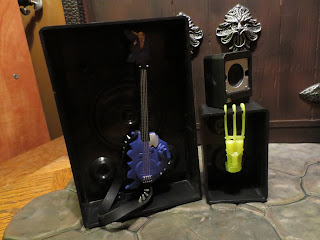 * There are a ton of accessories included with these sets and I kind of wish that Yellow Submarine had included some sort of directions to guide customers in assembling these. This set seems to also be designed to hold stuff behind the speakers but, again, it's pretty confusing to determine what goes where. 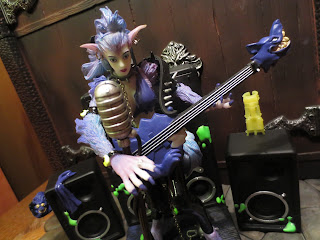 I'm sure some of y'all get sick of hearing me say this but the late 1990s and early 2000s were just absolutely insane times to be an action figure collector. It was very common to find figures like this that were overloaded with paint applications, accessories, and large, oversized display bases. While Wolfinica is more of an articulated statue than a true action figure, she's a pretty impressive piece. With this much quality work and this many accessories, I can't help but declare Howling Wolfinica to be Epic. 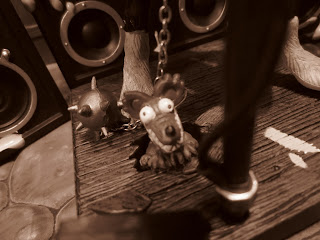