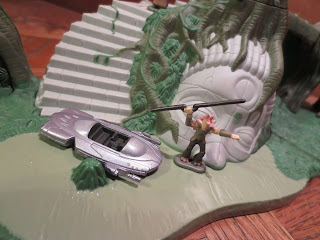 I hope you're all about some Micro Machines because I am right now! Today I'm extremely pumped because I've added one of the Episode I sets from 1999 to my collection: The Naboo Temple Ruins! Say what you want about Episode I (a film I've come to appreciate more and more over the years) but it had one heck of a toyline which was filled with some of the best stuff Kenner/Hasbro and Galoob had ever made. Let me take you back to the summer of 1999 when a young Barbecue17 roamed his neighborhood during the day in a Darth Maul t-shirt drinking Star Wars branded Mountain Dew out of a giant Boss Nass cup from Kentucky Fried Chicken, listening to Barenaked Ladies' Stunt and SmashMouth's Fush Yu Mang on a portable Walkman, and scouting the neighborhood pool for the ladies I was too shy to talk to. My evenings were spent toy hunting (you know, whenever someone would take me to the store), though, and while I picked up a couple of the Micro Machines playsets back in the day, at the time I was much more focused on the standard Kenner/Hasbro action figures. Now, though, I'm trying to make up for the folly of my youth as I managed to find this set at a great price, possibly less than the original retail price (I may have paid around $15 shipped). Ready for a look at a cool toy from days gone by? Then join me after the break... 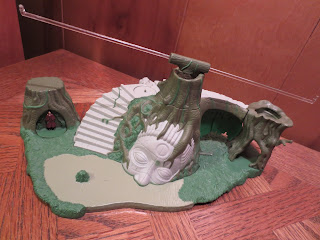 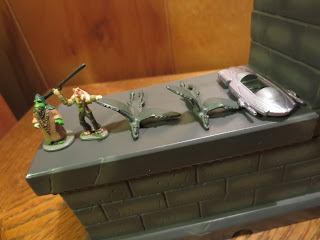 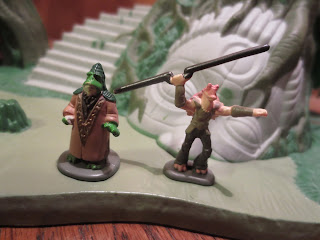 * The set comes with two standard microfigures which was a bit lighter than what most of the Original Trilogy sets came with. It really didn't leave you with much room act out a scene or a battle unlike the earlier Galoob sets. Still, these figures are really nice. Boss Nass has quite an elaborate paint job and the Gungan Guard is spot on.  Both of these guys have little holes in the base so they can stand on the various pegs these playsets utilized. 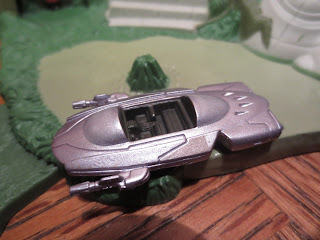 * The vehicle included in the Naboo Temple Ruins playset is a Gian speeder, the more heavily armored of the two main speeders used by the Naboo Royal Guard. It's a nice little model with a cool, metallic paint job. 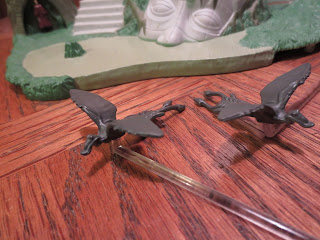 * Looking back on Episode 1, I'm impressed by how much cool flora and fauna Naboo had. It's a gorgeous world and trying to catch every detail still makes the scenes set on that planet fun to watch. This set comes with two identical Peko Pekos which are capable of being removed from the flight wands in the set. 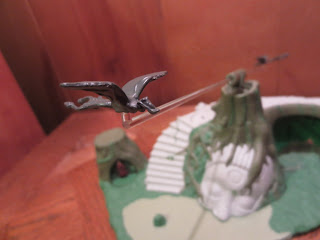 * The flight wands are removable as well, in case you want to use them for other purposes. The idea is that when both Peko Pekos are attached to the flight wands they can actually hover around the playset. If you have someone standing on top of the tree trunk on the left side of the set they will be knocked over as one of the creatures dives down and attacks. The feature works great but you can remove it to make space for other types of play. It's really well thought out. 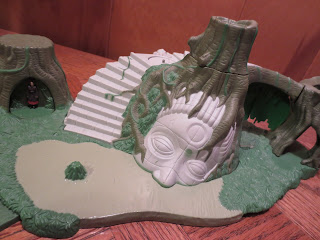 * I love the overall design of this set. I always loved the flat base Micro Machines sets but they only ever released five in the Original Trilogy collection (Tatooine, Hoth, Endor, Dagobah, and the Death Star). This fits right in and is actually more complex than any of those other sets. It has some incredible sculpted details such as the swamp in the front, the head of the fallen statue, the overgrown tree roots, and plenty of room to play. Hasbro needs to study these older sets before they make any other modern Micro Machines sets. 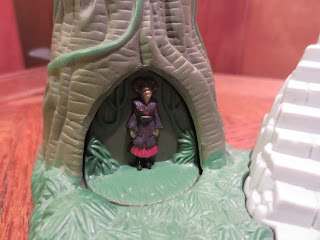 * On the left side of the set is a giant tree trunk with a relief of Queen Amidala. It's not removable and is permanently attached to the tree trunk. But wait, that's not actually Queen Amidala, is it? 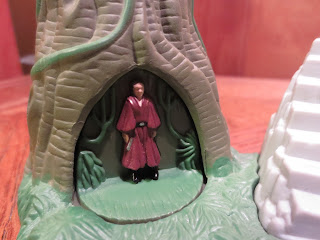 * Spin a little ridged disc on the side and part of the tree trunk rotates to reveal Padme, the true queen of Naboo. Little stuff like this, as goofy as it may seem, is what made these playsets great. It acknowledged stuff from the films while also offering little elements of interaction that made playtime more fun. 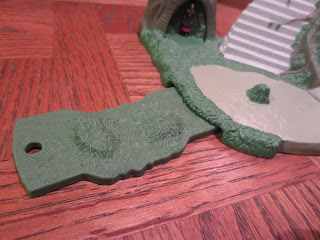 * An interesting feature that Galoob introduced to both the Micro Machines and Action Fleet sets for the Episode I line were these little plastic connectors. The idea was that you could attach multiple playsets together to create a bigger play environment. It's a cool idea in theory although there weren't that many sets released that made sense to connect together. At the very least it gave you some extra space to play. Plus, this piece can attach to three different points on the set. * You'll stumble upon this cool elevator heading up the stairs to the top of the Gungan's sacred place. It has a peg on it to keep figures nice and secure while you use the nearby lever (disguised as a rock) to raise and lower the platform. Again, stuff like this is just so much fun and makes these sets infinitely more interesting than what we're getting today. 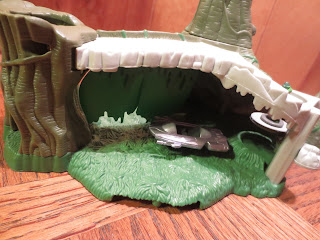 * If you look at the set from the back you'll see a very cool cave. This is what the elevator lowers down into. There's also a translucent rotating "arm" that the Gian speeder can be plugged onto which allows the speeder to kind of hover around the playset. 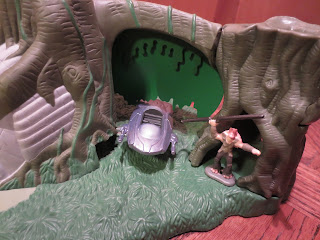 * The above mentioned arm rotates through the exit of the cave, passing through a curtain of moss and what not. It's actually a few pieces of thin plastic but it's a cool effect. 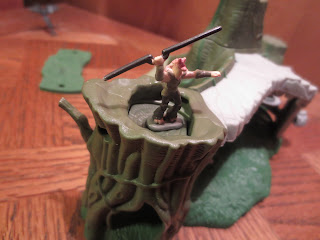 * On the far right side of the playset is another tree trunk. Place a microfigure on top of this tree trunk and push a button: They'll catapult through the air! I'm not sure if this is intended to represent the athletic Gungans jumping around, an attack by the Trade Federation, or perhaps it's just a silly feature. It's fun, though, and that's what counts. 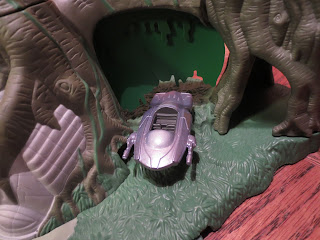 * Honestly, the only problem I have with this set is that it doesn't have a lever or a rotating disc which allows the Gian speeder to move. You really do have to physically move the vehicle yourself. That kind of robs this feature of some of the fun you'd expect from it. Imagine how cool it would have been if the thing spun on it's own. 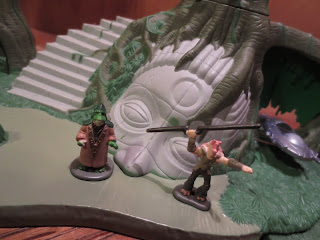 Looking back at some of these older sets, I just cannot begin to describe how incredible they were. Not every set was perfect but this one is darn close. This is seriously an Epic set as it features some really cool figures, creatures, and a nice vehicle, a number of fun play features, plenty of space to play, and some fine sculpting and paintwork. This is an extremely interesting set and thus far it's probably my favorite of all of the Episode I playsets I own. This one is available at some very reasonable prices so pick it up if you're at all interested in Star Wars Micro Machines. It's nostalgic and incredible!

I've reviewed a few other Micro Machines sets from both Galoob and Hasbro, including: