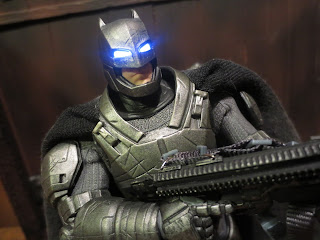 Today I'm looking at the first 2016 release from Mezco's One:12 Collective line that I've picked up: Armored Batman. Billed as a "Convention Exclusive," Armored Batman gives us another depiction of Batman in his distinctive armored outfit from this year's Batman V. Superman: Dawn of Justice. This is a crowded field, even in just the 6 inch scale, as Mattel has released this figure in their DC Comics Multiverse line, MAFEX has one out, and DC Collectibles is getting ready to release one in their already ill fated DC Films Premium line (seriously, they've already canceled 5 or 6 scheduled figures before the first figure has even been released). Mezco's One:12 Collective line has been building a solid reputation, though, and this guy features some die-cast metal parts, a soft goods cape and bodysuit, and light up eyes. He was pre-ordered for me as a birthday present back in June or July, but Mezco didn't release him until mid October. He got shipped to my parents' address, and not mine, so I had to wait a bit longer to collect him. I've got him now, though, so was he worth the wait? Find out after the break... 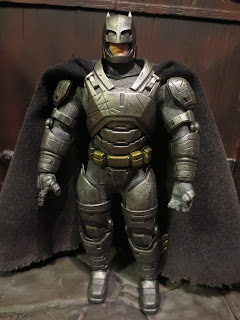 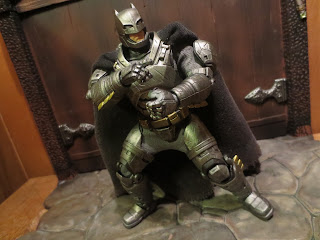 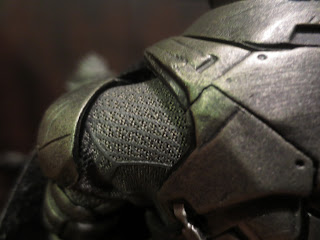 * Here's a good shot of the bodysuit that covers the actual figure's body. It has a great color and pattern that make it look less like a spandex of some sort and more like a legitimate body armor material weave. 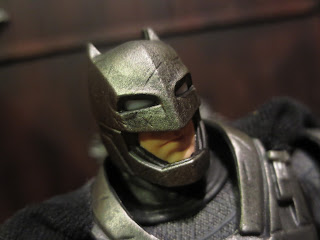 * First of all, this helmet just looks incredible. I love the boxy look of the helmet, the all white eyes, and the short bat ears. While it doesn't reveal much of Bruce's face, it is hard to tell how good this is in capturing Ben Affleck's likeness. That's OK, though, as it looks exactly like the suit in the film. Great paintwork here, too. 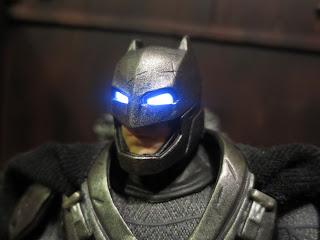 * One of the coolest parts about this figure, and one of the things that most distinguishes it from the other 6 inch scaled Armored Batman figures, is the light up eyes. Activated by a switch underneath the back of the helmet, these work great and look incredible. They're bright and look impressive whether turned on or switched off. 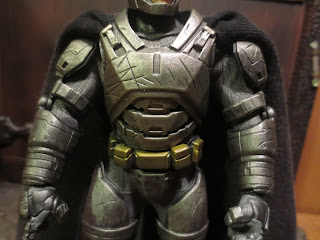 * Since this a figure of "Armored Batman" you'd naturally be expecting armor, right? Well friend, let me tell you that armor is what you get here. Armor, armor, armor. While the arm and leg armor is plastic, the chest armor is made from diecast metal. The armor certainly captures the bulky look of the costume from BvS and features some incredible sculpting and paintwork. It's divided into five smaller pieces over a bodysuit: The body armor, the belt and crotch guard, the left and right arms, and the left and right legs, along with the hands, feet, and head. 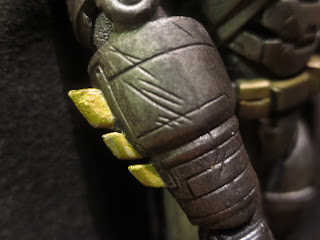 * Here's a closer look at one of Batman's gauntlets. The spikes are really nice and not at all bent (one of the problems that plagues many Batman figures) and you can see more of the gouges and dents in the armor. The paint work is excellent and there's quite a bit of variance in the color of the armor to make it truly resemble metal. 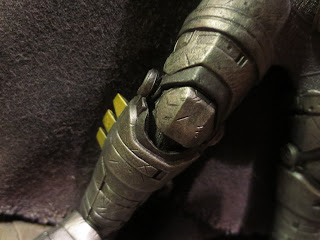 * Here's a shot of Batman's leg. You can see here how the upper and lower armor pieces are actually connected with a moving knee pad in between. There is definitely some good design work here to help make this figure as functional as it can be. 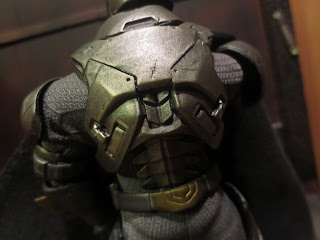 * Here's a look at the back of the torso armor. I like the exoskeleton like appearance of the back armor, particularly the spine in the back. 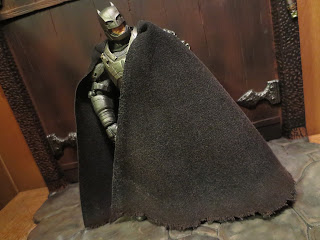 * Batman's cape is pretty nice. It's solidly attached onto the main body armor and is nice and thick. It also is kind of frayed at the bottom, even looking like it has been dragged through mud. It's a really nicely done cape and has a very distinct feel from the previous Dark Knight Returns capes. 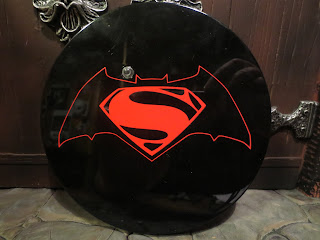 * To help Batman look cooler when just standing around, he includes a large plastic display stand. There's a clear plastic peg here to help hold his spiky soles in place and a colorful Batman/ Superman graphic to give the stand a bit of personality. It looks nice and is absolutely functional; I like it. 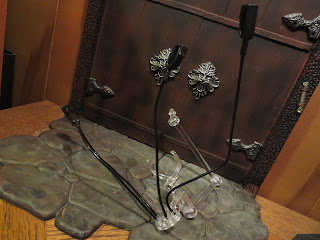 * Here's a quick picture of the action stand that can plug into the base (the foot peg is removable) to give Batman a bit of vertical display height and to give his cape some life. I'm not a huge fan of these, but I'm sure many collectors use them. It's actually seven separate pieces that fit together. I'd rather have more accessories, as I'm not sure it makes much sense with this version of Batman. 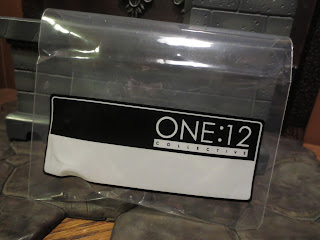 * Mezco has been including these little plastic bags with the figures, and I kind of like them. It doesn't hold everything (the pieces for the stand are too big and the grapnel darts seem to fragile) but it's a great way to hold the hands, kryptonite grenades, and the extra screw for the head. Yes, Mezco included an extra screw for the battery compartment on the head, just in case you lose the one you have. See it down in the bag! 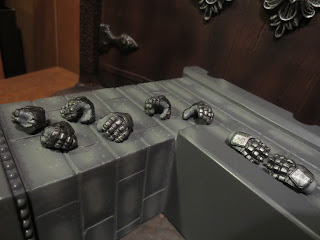 * Mezco gives us four pairs of hands with this release, and they swap easily, stay on securely, and look really cool. There's a nice amount of variety here as you get a pair of fists, a pair of open palms, a pair of standard grips, a right trigger hand, and a left softer grip (for holding the rifle). 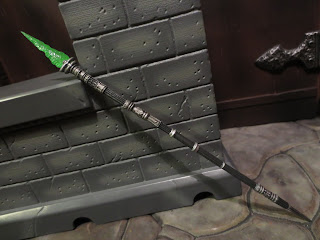 *  Armored Batman comes with a few great accessories and it's tough to tell which is the coolest. The Kryptonite spear is definitely in the running, though, as it's die-cast metal and features a really impressive (and really sharp) translucent Kryptonite tip. 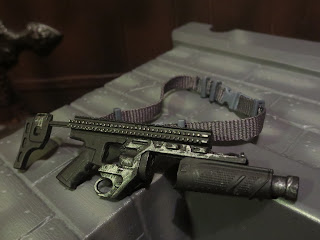 * Batman comes with a....gun?! Yup, but it's just a grenade launcher he uses to try and stop Superman. The BvS Batman has some issues, OK? Anyways, this accessory is also top notch. It has an extending stock, a functional sling, and a barrel that slides open so you can pop Kryptonite grenades inside. The paintwork and quality is incredible; it's as good as what you'd see in the high-end 12 inch scale. 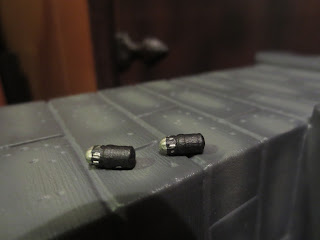 * To fit inside the barrel of the grenade launcher Mezco included two Kryptonite grenades. Despite being so small, they do have recognizable sculpts and some paintwork. These are definitely accessories you'll want to store in the plastic bag, lest you lose them in the carpet. 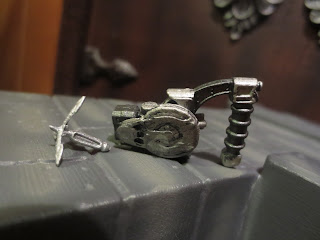 * While Batman typically uses a smaller grapnel gun in BvS, he does break out this larger one in his fight with Superman. This is an incredibly well sculpted and painted accessory that features a removable grapnel dart. It fits into the barrel of the device perfectly. 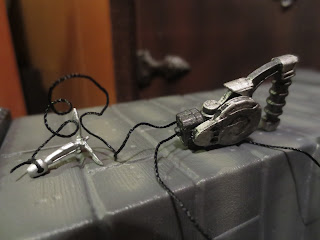 * In addition to the standard grapnel above, there is also a grapnel with a cord attached. While it's a bit impractical (and, believe me, this accessory would not at all hold the weight of the figure), it is kind of cool. It's not insanely long so with a little work you could make some really cool dioramas and displays with this piece. There is a plug at the end of the cord that plugs into the barrel of the grappling gun with a little bit of work. 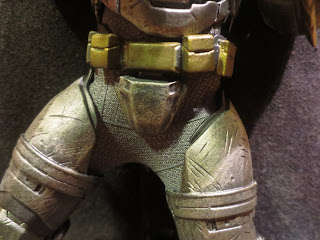 * I think everyone who has this figure immediately realized that the biggest problem with it is that the crotch guard just doesn't look right. Actually, it's more the issue of the material used for the body suit: Whenever Bruce is posed with his legs moved you can clearly see the bodysuit stretching out. It really interrupts the armored look of the costume and does show a weakness in the use of soft goods on smaller action figures. 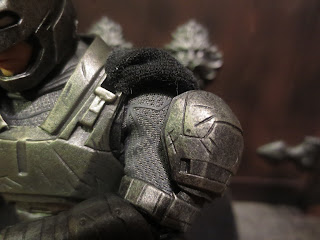 * It's not as big of an issue, but the shoulders also show one of the major design flaws with this figure with the armored bits just not staying on properly. Again, I think Mezco really should have considered attaching these elements separately to the actual body suit for a better appearance. Keeping the shoulder pads anchored to the shoulders just seems like an overall better idea that would have preserved both form and function. 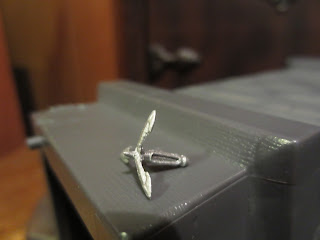 * The grapnels darts look great although mine arrived a little bent (it's tough to see in this picture). They also seem kind of fragile, so be careful with them! 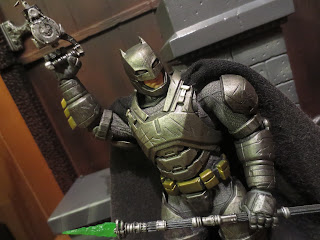 As soon as I found about this figure earlier this summer, it's been one of my most anticipated releases for the year. Having it in hand, there's so much that I love about it (the die-cast armor, the grenade launcher, the metal Kryptonite tipped spear, the light up eyes) but there's also the fundamental issue that the figure does look odd in certain poses due to the way Mezco designed the armor to sit. The odd look of the crotch when Bruce takes a wider stance just looks so strange to my eyes! This is absolutely a top notch figure but, since the One:12 Collective line is still just kind of finding it's feet with probably less than a dozen releases out there, this might be a bit of a lesson for Mezco in better handling armored characters. This is still a Great figure but, for $110 dollars, I expect a bit more. This really is an amazing toy, but it just doesn't flow as seamlessly as the Dark Knight Returns figures did. I'm anxiously awaiting the standard One:12 Batman, so we'll see how he turns out. He seems to be excellent, as Mezco seems to have a better grasp on spandex or suited characters than they do with armored characters. 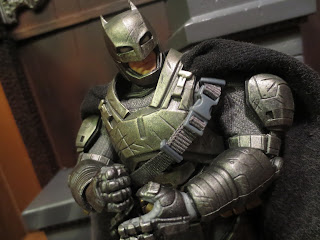 For more figures from the One:12 Collective DC Universe range, check out these other reviews: