Action Figure Review: The Joker (A Death in the Family) from DC Comics Icons by DC Collectibles 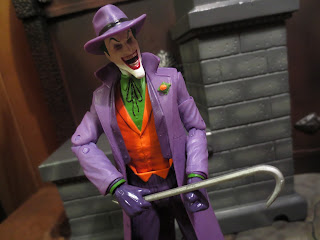 I've really liked both figures I've purchased from DC Collectibles' DC Comics Icons series so far, and the Joker here makes my third purchase. I pretty much only collect Batman related characters in the 6-7 inch scale DC lines, so there are plenty of other cool figures out there that I've not picked up or reviewed. The aesthetic of this line is that while all of the characters have a similar aesthetic (designed by artist Ivan Reis), they are all based off of different storylines from across DC history. This version of the Joker should look very familiar to comic fans as it's been around for years (it looks very much like the Neal Adams licensing art from throughout the 80s) although this figure is billed as being based on the storyline A Death in the Family by Jim Starlin and artist Jim Aparo. Featuring the death of Jason Todd, A Death in the Family seems like a great choice for a Joker figure. Unfortunately, this outfit is not seen in that story, so I'm not sure what exactly DC Collectibles was thinking. Let's take a look at this figure and see if it's still worth a purchase after the break... 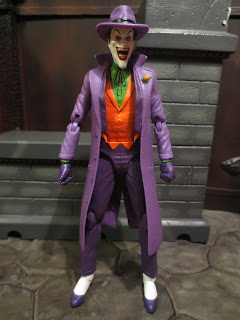 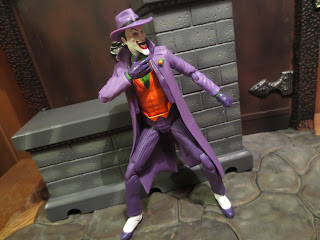 * DC Collectibles has done an incredible job of finding a perfect balance between incredible articulation and an aesthetically pleasing appearance. These really remind me of a pleasing hybrid between your standard Hasbro styled Marvel Legends figure and something like a Mafex or Figma figure. Solid articulation with a durable feel. 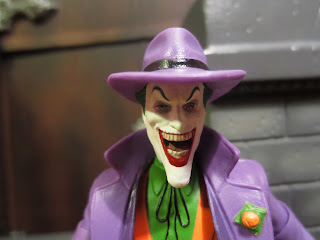 * This is an excellent headsculpt. It does look like Jim Aparo's Joker (who also had the long, narrow face and rounded chin like Neal Adams' rendition of the character), but it still should fit in with everyone else in the line. I love the open mouth filled with teeth. I'm also loving the purple fedora. Being around 5 or 6 when the 1989 Batman film was released, Jack Nicholson's portrayal of the Joker wearing a fedora has always made a huge impression on me. 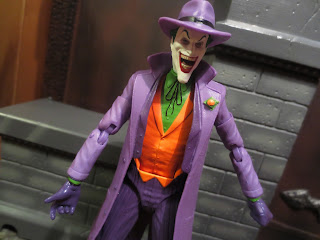 * The paintwork on the Joker is excellent. The colors are bright and vivid with multiple shades of purple to show off the various layers of clothing the Clown Prince of Crime is wearing. Everything on here is neat and clean. Beautiful work! 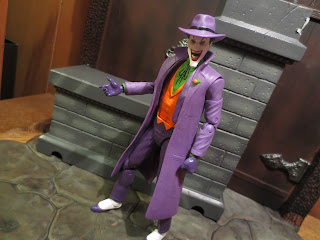 * The coat looks great. Again, while the Joker never wears a purple trench coat in A Death in the Family, that doesn't mean this isn't a good, classic Joker look. Not only does the coat look nice but it's rather pliable, meaning it doesn't effect the articulation much. 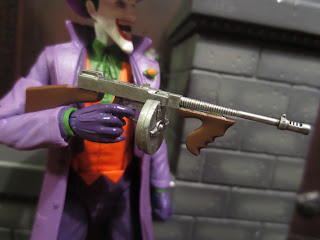 * I love this Tommy gun, and I don't even care that the Joker doesn't use a Tommy gun in A Death in the Family. It's still a weapon that the Joker has used and it looks incredible with him. This is a really fantastic accessory! I love the sculpted details and the paintwork on this piece. 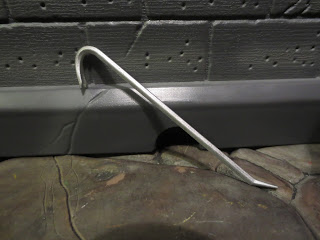 * Since this figure is supposed to be based on the Joker's appearance in A Death in the Family,  he comes with a crowbar. Yikes! Yeah, this is the crowbar he used to beat Jason Todd with and it's a pretty nice, if gruesome, accessory.It doesn't exactly match the crowbar seen in the book, but that's a pretty minor detail. 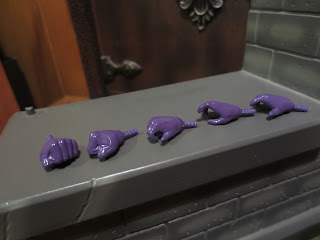 * Like the other DC Icons series figures, the Joker does come with a series of interchangeable hands. Four are right hands and one is a left hand. And yeah, that's really strange (but I'll get to that in a minute). There is a set of fists and three right handed grips: One for the crowbar and two that look pretty similar which seem to be for the Tommy gun. They swap easily and stay in the wrist sockets nice and tight. 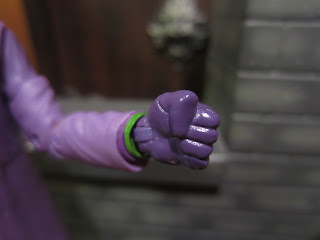 * So...why does the Joker only have one left hand? And why is it a fist? It means that he can't hold both weapons at once nor can he hold either weapon with a two handed grip. This really sucks because the Tommy gun has that second handle in the front and, thanks to the excellent double hinged elbows, the Joker would look awesome holding it. 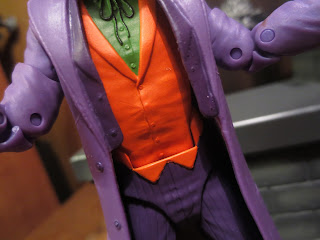 * The other thing I'm not that thrilled with on this figure is the mid-torso joint. It's really awkwardly placed in such a way that it breaks up the Joker's vest, and thus it tends to stand out like a sore thumb. I really think a ball jointed waist/ mid-torso that sat under the torso, covered by the sculpted vest hanging down, would have looked so much better. It probably would have functioned better, too! 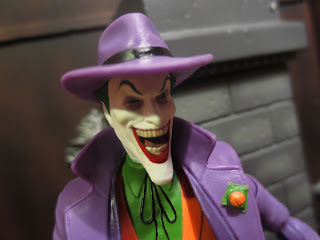 * So... why is this listed as being from A Death in the Family when this figure's outfit (specifically the purple trench coat and fedora) don't even appear in the story? My guess is name recognition, as that's a pretty well know story as opposed to an older storyline that actually featured this costume. A Death in the Family has some interesting looks for the Joker (an aviator's cap, traditional middle eastern garb, and purple BDUs with a white pith helmet while the Joker's face is painted with flesh toned paint), but this isn't one of them. 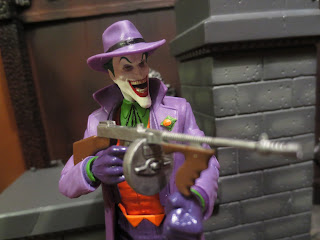 I'm very glad to get this version of the Joker, even if it's totally mislabeled. If you get beyond that odd oversight/error then this is a terrific figure. I'm really wondering if the lack of a gripping left hand was a production error and not a design error because I was looking at some images of the figure in preproduction which featured a left gripping hand. Too bad we had some minor screw-ups, because this was well on its way to being one of the best Joker figures ever. It's still a Great toy, but it's not as perfect as it could have been.


I've reviewed so many Joker toys on here that I think he's soon going to have his own review index like Batgirl, Batman, and Harley Quinn. I've reviewed including Mattel's Suicide Squad Joker, Toys R Us exclusive Suicide Squad Joker, the Lego Arkham Asylum set with a orange suited Joker, the Arkham Asylum Clayface with a Joker head, the Arkham Origins The Joker and The Joker as Red Hood, Copperhead, & Deathstroke (Unmasked) Action Figure 3-Pack, Mattel's Batman TV Series The Joker, the Batman Power Attack "Attack in the Box" The Joker, the MAFEX Heath Ledger inspired The Joker No.005 and Bank Robber Joker, Mattel's Multiverse The Joker from Batman: Endgame, DC Collectibles' Endgame Joker, the Imaginext The Joker and The Joker & Harley Quinn, Kenner's The Laughing Man Joker and Laughing Gas Joker, DC Collectibles' New 52 The Joker, and the Arkham Knight "Killing Joke" inspired Joker.