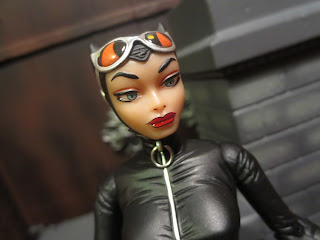 About a decade or more ago it was pretty commonplace to find DC Direct releasing artist inspired versions of popular DC characters. The Ed McGuinness inspired Batman/ Superman line, the Jim Lee Hush line, and the Tim Sale The Long Halloween line were all popular lines that focused on incredibly artist specific interpretations from specific stories or books. That kind of fell out of favor for a while, though, but DC Collectibles slowly brought it back with their DC Designer Series of action figures based on Greg Capullo's work on Batman in the New 52. Now they're starting to branch out and soon will be offering figures based on the art of Amanda Conner, Ant Lucia, Lee and Bermejo. Currently, you can pick up figures based off of the art of Darwyn Cooke. Sadly, Cooke passed away in May of this year, and thus these figures are now a testament to the legacy of work he left behind. I recently picked up this figure of his distinctive interpretation of Catwoman. Let's take a closer look at her after the break... 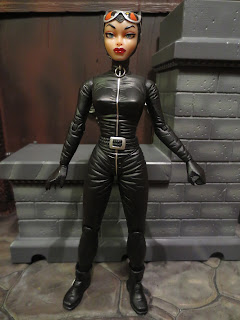 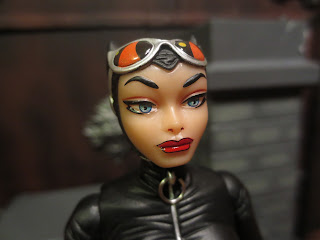 * I'm really loving this portrait. The headsculpt and the paint are just perfect and really capture a very unique, yet gorgeous, take on Selina Kyle. The goggles look incredible and her lips are incredible. She also has an incredible balljointed head that really gives her some added expressiveness. Oh, and the ring on her zipper? It's an actual little metal ring. Cool, right? 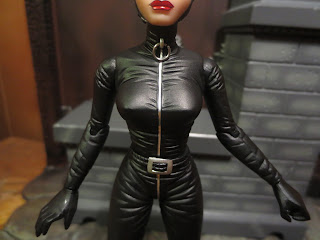 * There's not a ton of paintwork on this figure, but what's there looks great and is extremely clean. The black for her suit and the silver of her zipper and belt buckle look excellent. 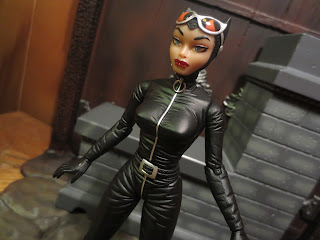 * Since DC Collectibles actually credits their sculptors on the packaging, we can thank Jonathan Matthews for doing such an excellent job in translating Cooke's specific style into something that looks great as an action figure. I love the work on the body here; Selina actually looks like she's wearing an extremely formfitting leather/pleather catsuit instead of black bodypaint. The wrinkles and bunching of the suit just looks perfect. 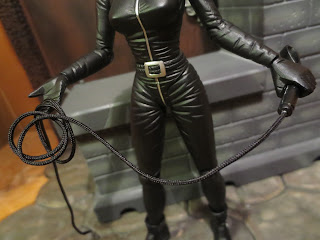 * Catwoman includes a really cool whip. While the handle is plastic (it easily fits in her left hand), the whip itself is made from a piece of cord. It's actually a really cool concept (kind of like the vintage Beastman's whip in Masters of the Universe) and it makes for some good posing opportunities that are a bit less dramatic than what you'd see with a harder plastic whip. 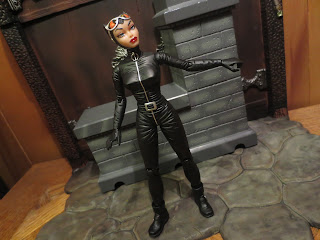 * Catwoman's articulation is definitely pretty basic. While DC Collectibles has largely been upping their articulation over the past few years on many of their lines, the Designer Series has been hit or miss. I get that they've chosen to elevate the sculpt as the most significant element of the figure, but would things like ball jointed ankles and wrists, or some form of bicep movement have been completely unacceptable? If you're going to severely limit articulation, give me a nice stand at least. 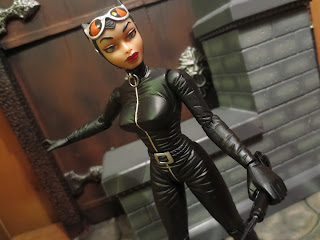 Appearance wise, I'm really liking this figure. This is an incredible Catwoman that captures Darwyn Cooke's artwork perfectly. The sculpting and the paintwork here are just gorgeous. When it comes down to the articulation, though, I'm a but underwhelmed. I get that this isn't supposed to be a DC Icons figure with plentiful articulation, but wouldn't ball jointed ankles and wrists have given her a bit more motion without sacrificing her appearance? I'd rather DC Collectibles go with a more dynamic pose and a cool display base rather than release something beautiful on an outdated articulation model. She's a Good and a 1/2 figure and looks great on display, but she's certainly not a perfect Catwoman action figure.

I've reviewed a number of previous Designer Series figures, so far all from the earlier Greg Capullo series, including: