Road to Rogue One: General Grievous #129 from POP! Star Wars by Funko 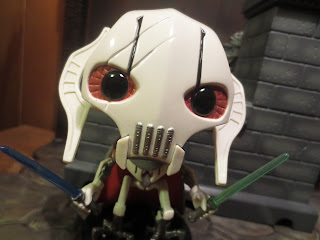 I've mentioned a few times before that Walgreens' is quickly becoming one of my favorite places to shop for toys. They get great exclusives, tend to do a pretty good job of stocking both their exclusive items and most regular lines, and they're usually conveniently located. I'm currently hunting for Walgreens' exclusive C-3PO from Star Wars: The Black Series, so I'm in one or two stores nearly every weekday on my lunch break. Last week I happened to walk into one of my local Walgreens' stores and found a few of their new exclusive Star Wars POP vinyls. I was originally planning on just grabbing the Rebels' helmeted Sabine POP, but the fact that Walgreens' was having a buy one get one free sale led me to snatch Grievous too. You know, because he was essentially free. General Grievous is a character who seemed really cool prior to Episode III, was kind of underwhelming in the film, and then who was greatly improved by The Clone Wars. Let's check out this new exclusive POP! after the break! 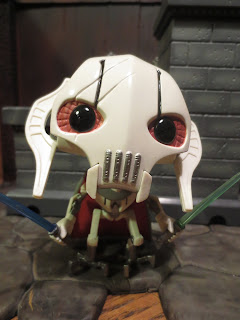 Non-Scalper Price: $10 (although I got him at a Walgreens' "Buy One, Get One Free" sale. 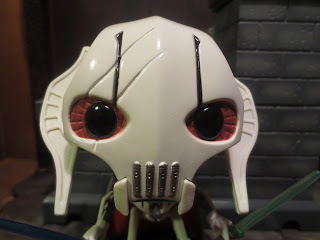 * Grievous' headsculpt is awesome. I love the look of his eyes and the armored helmet/ head is just too cool. Those gouges over his right eye are pretty wicked, am I right? The paintwork is excellent, too, leading to an all around impressive toy. 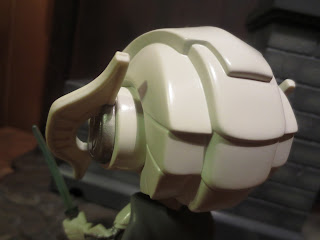 * When you turn the head around you really get a view of the nice sculpting done by Funko to show off Grievous' cybernetic head. It definitely looks reminiscent of a Battle Droid here. I love that Funko is not trying to overly simplify these more complex Star Wars designs in this line, and Grievous is one of the best I've seen. 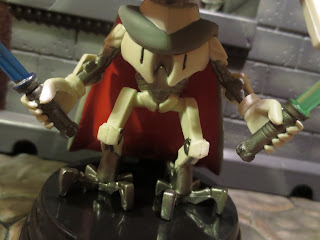 *The body sculpt on Grievous looks excellent. I love the detail present here. While Funko certainly has a somewhat deformed and cutesy style they don't skimp on the body detail on some of these figures. Grevious clawed feet and his cybernetic body is excellent. This is two armed grievous, by the way, but maybe a four armed version of the Droid Army general will make his way out someday. 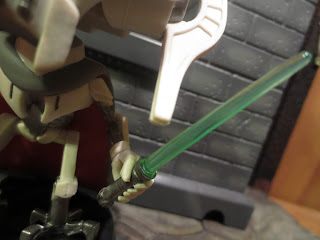 * Since he's only sporting two arms hear, this version of Grievous is only wielding two lightsabers. Both sabers look really nice (one's green and one's blue) and they add a really cool, menacing vibe to the figure. 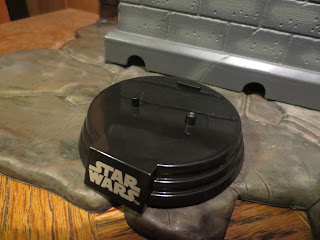 * General Grievous comes with a stand that's quite similar to the stands that come with all of the other POP! Star Wars figures, the only difference being the small tab that his cape can attach onto. I love the uniform look of these and the security they give the figures when standing on the shelf. 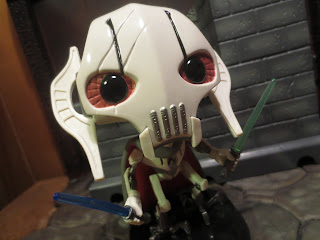 While I wasn't planning on picking him up, I think General Grievous is one of the best Star Wars POP! figures released this year. He's really, really good. I'm loving picking up these guys every now and then as they're way more interesting to me than Hasbro's current 1/18th scale five POA figures. While I'm really waiting for General Grievous to make it into the 6 inch Black Series line, it's nice to have this dude around. He's a Great and a 1/2 POP! vinyl and well worth tracking down if you have an interest in him.