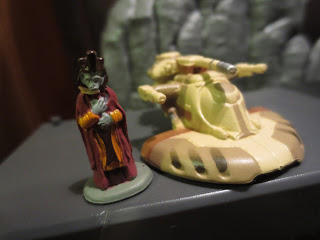 I promised that more reviewed of the basic vehicle/figure collections from Galoob's Star Wars Episode I Micro Machine line were coming, and here's Collection II! These were released in 1999 to coincide with the film that I was initially wowed by, then disappointed with, then actively hated, then apathetic towards, and now that I will defend and love with all of the vigor of a Victorian gentleman defending the honor of a lady. Funny, huh? Also, notice how Nute Gunray looks like he's wearing a scarf? Turns out that's a part of the slowly decomposing rubber band that had held the figure in the tray for the past 17 years. I didn't notice it until I started typing the review and I honestly questioned if I should retake the figures. I decided not to, though, because this is a review of 17 year old Micro Machines. I'm just not putting that much effort in here. Sorry, y'all, but Homey don't play that. Let's take a look at some Micro Machines and just enjoy ourselves, shall we? 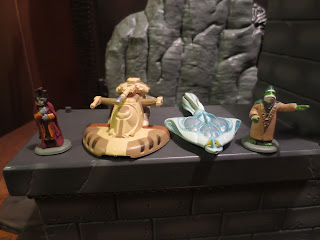 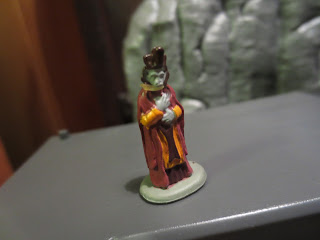 * I flipping love me some Neimoidians and I absolutely adore Nute Gunray. Seriously, these guys are the coolest ever and, what's amazing is that since they were costumes rather than elaborate CG, they still hold up really, really well. Nute is a nice looking figure (although not the most action packed character). He's also another character who ended up appearing in all three prequel films (and the Clone Wars!). He's a big deal and a beautiful microfigure. 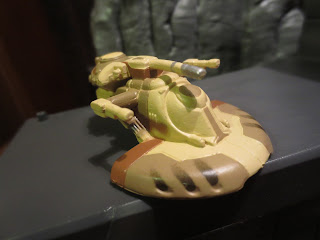 * I've owned an AAT (armored assault tank) for years since it came with the Jar Jar Binks transforming playset, but I really don't mind having another. It also turns out that this one is a good bit larger than the one included with that set. This is still a really strong vehicle design, even after all these years, and I love the design and the paintwork here. The paint is quite elaborate for a Micro Machine. It's also a solid, durable little tank. 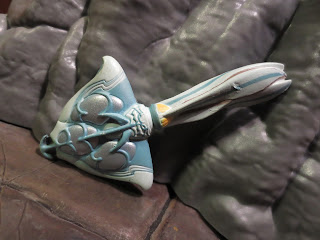 * Next up is the bongo, a Gungan submarine. It's the vehicle Qui-Gon Jin. and Obi-Wan Kenobi are gifted with when they have to travel through the core of the planet Naboo. They're also cursed with Jar Jar, though. This is another awesome mini that's insanely detailed with beautiful paintwork. While a bongo was included with the Micro Machines transforming Gungan Sub playset this version of the vehicle has the hole for a stand on the bottom instead of on the top. 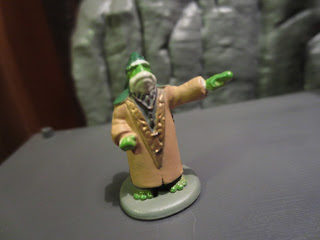 * First Nute Gunray and then Boss Nass? Was this set actively fighting to win over my heart? Boss Nass is another cool character who doesn't get the respect he deserves. He's well dressed, has a great voice, and shakes his jowls like a wet dog to emphasize a point. There's a Boss Nass figure included with the Naboo Temple Ruins playset but it's a completely different sculpt. How fun? This Boss Nass looks like he's saying "Talk to the hand." Or perhaps "Bye Felicia!" (BTW, I just learned about Bye Felicia on Wednesday, so I've been anxious to use it. How'd I do?) 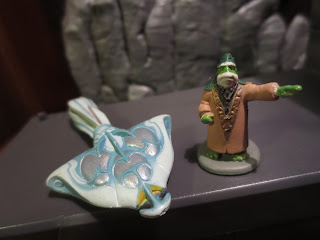 While I already have the two vehicles in this set, they're pretty good vehicles. Great vehicles, actually. And the figures? Both outstanding! This is definitely the winner of the sets so far as every figure in here is a complete winner in my book. Plus, they kind of pair up: Nute Gunray wants to destroy Naboo while Boss Nass wants to save it. Dang, imagine if that had been the general focus of Episode I? Boss Nass and the Gungans fighting Nute Gunray and the Trade Federation! You can basically stage the climax of my Episode 1 remake if you track down this Great and a 1/2 17 year old set of Micro Machines.

I've reviewed plenty of other Micro Machines sets from both Galoob and Hasbro, including: