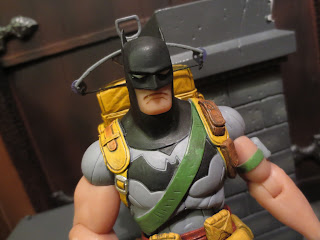 I really love the design for the "Survival Batman" suit from Scott Snyder and Greg Capullo's Batman: Zero Year storyline. While the story is definitely over the top, it just works and this suit fits the vibe of the storyline perfectly. It's still 100% Batman, but the somewhat post-apocalyptic elements of it just give it an entirely different vibe. I guess it's kind of like the "Knightmare" outfit from BvS in that sense. Released as part of the DC Comics Designer series line, this figure really does a nice job of capturing Greg Capullo's distinctive artwork. Let's take a closer look at Survival Batman after the break... 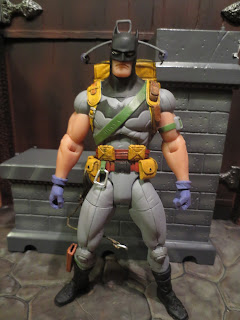 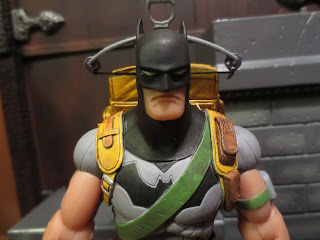 * First of all, let's just agree that this is a pretty good Batman headsculpt that captures Capullo's style. Second, the paintwork on everything, including the standard Batsuit underneath, just looks darn good. There are some nice sculpted details on the suit, too, that help to just improve the overall look of this figure. 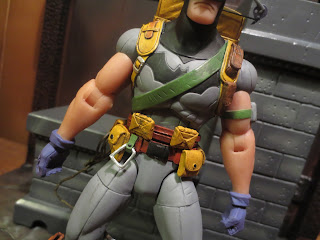 * I love the "cluttered" look of Bruce's survival outfit. The shoulder straps and chest strap, the various belts covered with yellow utility belt styled pouches, and the attached carabiner all contribute to the rough, survivalist depiction of Bats here. I'm also digging the purple gloves, a throwback to Batman's first appearance back in Detective Comics #27 in May of 1939. Such a cool detail! 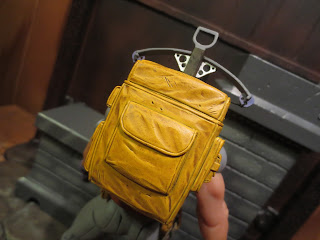 * The backpack looks great. I love the paintwork and drybrushing effects on this piece, as it looks like it's been through some tough days in Gotham City. It also really hearkens back to the utility belt, making this a more hardcore extension of one of Batman's most significant pieces of equipment. 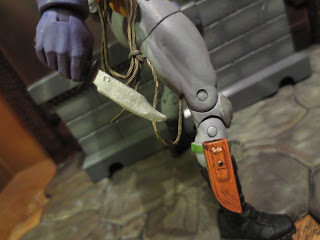 * While he's used swords and such, Batman's not much of a knife guy. He needs one in an overgrown Gotham, though, and thus he's got this trusty survival knife strapped to his right leg. It' a cool accessory and it fits perfectly in the attached sheathe. I love the paintwork on the sheathe, too. Really stellar stuff, DC Collectibles! 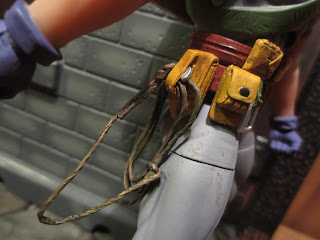 * Bruce keeps a length of rope attached to his belt on the right side. This rope looks really impressive, as do all of the loops and pouches surrounding it. The paintwork and sculpt is incredible. There's even a small silver hook on the end. While I wouldn't trust this rope to bear any actual wait, it's a cool feature. 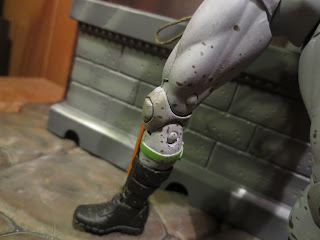 * To show off that Batman's not running around the cleanest city in the states, the inner legs of Batman's suit are covered in a black mess. What the heck is that? I don't know, but it's a cool paint app that makes his survival boots and armored knee pads seem all the more necessary. 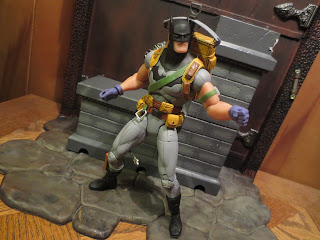 * When looking at the list of points of articulation above, you're probably thinking that Batman moves pretty well. You'd be incorrect. While he has a ton of joints, and is a sturdy feeling figure, so many of the joints just don't work that well. The hips, elbows, and mid-torso have really limited ranges of motion, making this figure feel anything but super articulated. 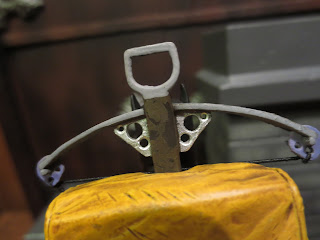 * I love the look of this crossbow, but I wish it were removable! It's just sitting in the backpack, permanently attached, taunting me. DC Collectibles really should have tried to make this a removable accessory, or have given Batman something else to carry. He needs something besides a single knife. 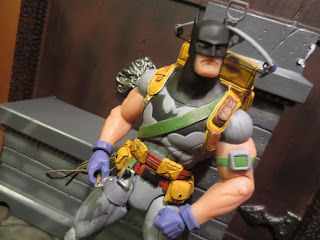 Having so many Batman figures, it's always a welcome surprise to get something different and unique for the collection. Survival Batman definitely qualifies, as he has an extremely distinctive look to him. As far as appearance goes, this is an incredible figure with some of the best work I've seen from a DC Collectibles item. The articulation is odd though, as it seems like it was intended to be plentiful but it's awkwardly limited in places. I also wish that darn crossbow were removable. Still, this is a Great Batman figure and a really cool way to add something different to your Batman shelf.

I've reviewed so many Batman figures that I've given the Caped Crusader his own review index! If you're looking for more DC Comics Designer Series figure reviews, check out the following: