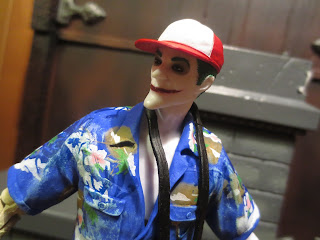 The Joker really needs no introduction, nor do his controversial (and despicable) actions in The Killing Joke. Today I'm looking at the second figure from series four of DC Collectibles' Batman: Arkham Knight line which depicts the Joker in the vacation outfit he wears in the game's flashback to the horiffic crippling of Barbara Gordon. That's all I want to say about that right now. What I do want to address is that this is a figure that I'm about to give a very, very low rating to for reasons which I'll explain in the review. If you read my reviews regularly, you've probably come to notice that I don't give super low ratings very often. Ever wonder why that is? There's two reasons: One, the simple fact that a figure looks decent and doesn't break already helps it to not receive one of my lowest ratings. Second, since I'm not making any money off of this site nor do I receive review samples, I tend to only buy stuff I'm already pretty sure I will like. I don't buy stuff I'm not interested in, thus my reviews tend to be higher. Of course, sometimes I preorder a figure from a line I like, get it in hand, and am wildly disappointed. That's what is happening today, folks. Jump in and learn more after the break... 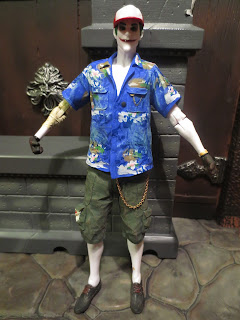 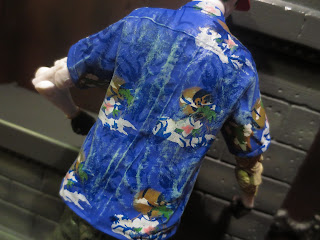 * The Joker's Hawaiian shirt is key part of his look and the paintwork is awesome on it. I can't believe how detailed this is! The shirt is actually a separately molded rubber overlay that is permanently affixed over the torso, which looks good but loses some functionality. I'll get to that in a second, though. 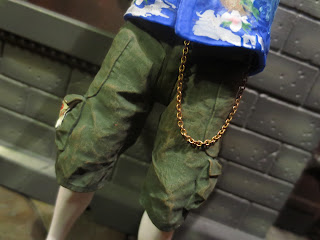 * The Joker's cargo shorts are really nicely sculpted. I love the look of these, especially how the pockets look like they're filled  with various creepy junk (there is a napkin or handkerchief hanging out of the right). The little chain is also a nice touch. 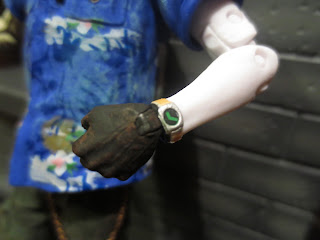 * There really are some nice, fine details on this figure such as the wristwatch with glowing dials on the Joker's left wrist and the band-aid on his left shin. 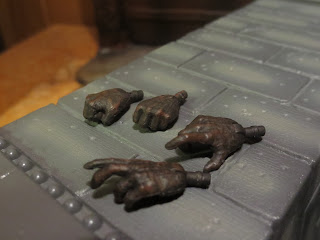 * The Joker comes with 4 interchangeable hands which easily swap out at the wrist sockets. There are two fists, a pistol gripping right hand, and a gesturing left hand. Little stuff like this definitely adds some more value to the figure. * The Joker comes with two accessories, but the only good one is this camera. It's a sinister but key part of the Killing Joke homage in Arkham Knight and it can easily fit over the Joker's neck thanks to the strap. I have a feeling that some Marvel Legends fans might be interested in this camera for their Spider-Man figures to help equip Peter Parker for his other career. It's a nicely sculpted piece with some decent paint application. I can't think of too many camera accessories in this scale and style, so it's definitely cool to see this here. 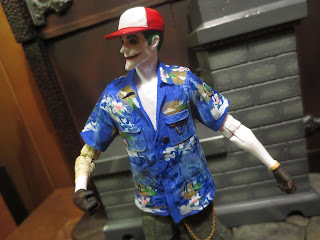 * So I mentioned that the Joker's shirt is a rubber overlay that sits over his torso. Unfortunately, a rubber overlay on top of a fully articulated torso doesn't allow for the articulation to function. The shoulders and mid-torso joints are useless, as are the knee joints, as they're tucked up inside of the shorts. What's really negative about this is that the Joker cannot be posed using his camera, or in any other functional poses. 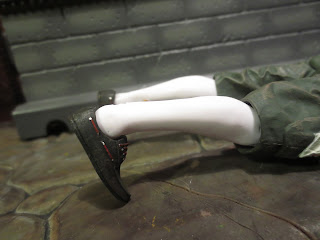 * The range of motion on the Joker's ankles is pretty good, but my gosh are they loose. I can not keep this figure standing up. The Joker always wants to tip over, which really sucks. 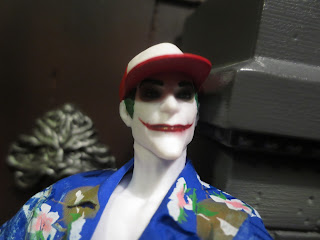 * Sorry about the bad picture, but what the heck is up with this Joker headsculpt? DC Direct/ DC Collectibles has released some incredible Joker sculpts based on the Arkham-verse Joker, but this isn't one of them. Heck, this would be week to average for a Mattel figure. I'm just really disappointed in this one. 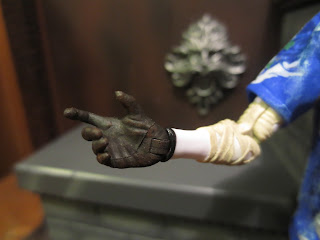 * So...where is the Joker's revolver? It's a key part of the scene in Arkham Knight and he comes with a hand designed to hold it, so it's absence definitely feels really strange. 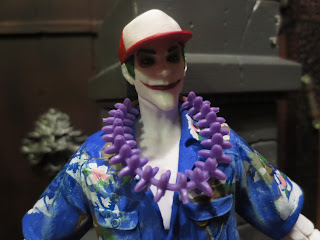 * The other accessory the Joker comes with is a purple lei. This is a unique extra and I like the idea, but the execution is lacking: It just doesn't want to sit right! Maybe something smaller or something that used an actual string would have worked better. 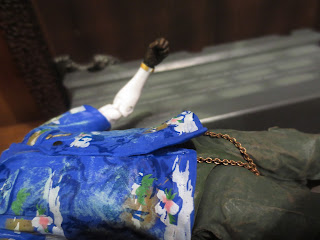 * As mentioned a few times above, the Joker's shirt is actually a separate rubbery overlay that sits over a more standard torso. It's glued up the middle and that glue is already starting to come loose. Remember, there is articulation under there, so the figure will move a bit causing the glued edges to separate even more. An actual cloth shirt would have been so much better here! 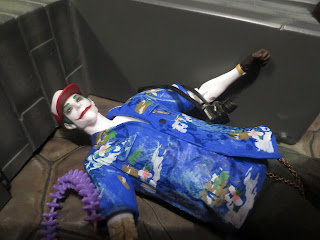 I'm definitely going to say that this guy is probably the worst action figure I've bought this year. There's some great paint and sculpting here, but the design of the body and the articulation is just terrible. This figure can't stand and can hardly take any poses. Factor that in alongside the odd headsculpt, the weird lei, and the lack of a pistol, and you've got the first figure this year that I'm giving a Crap and a 1/2 rating too. This guy is just not worth picking up. Just think: DC Collectibles canceled the Arkham Knight Poison Ivy figure but released this stinker. Ugh.

If you're looking for other Arkham-verse figures, check out the following: