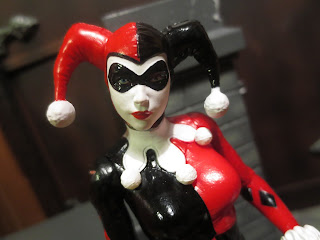 Hey look! It's another Harley Quinn review! Who would have thought? This time I'm looking at Harley Quinn in her classic outfit from one of the brief flashback scenes in 2015's Batman: Arkham Knight. Batman: Arkham Knight was a fairly divisive game, but thus far the action figure line has been pretty solid. Featuring a mixture of the usual suspects (Batman, Catwoman) and some more obscure characters (Professor Pyg), DC Collectibles has now been supporting this line for about a year and a half. Things seem to be winding down, though, as series 4 was originally supposed to include Poison Ivy alongside of this flashback Harley and a Killing Joke inspired Joker, along with a boxed set of Batman and two of the Arkham Knight's henchmen. Poison Ivy and the henchmen set have been cancelled, which really stinks as Poison Ivy played a pretty integral role in Arkham Knight. The sheer popularity of Harley and the Joker kept those figures alive, though, and today I'm looking at a figure of Harley in her classic duds. This is a very nice realistic looking Harley and, while we've received this outfit a few times this year already, I'm not sure we've ever seen a version quite like this. Read on after the break... 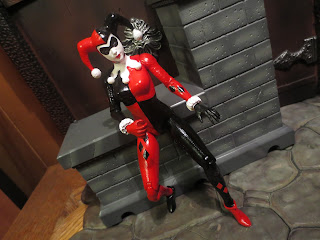 * Harley isn't the most superarticulated action figure but she can definitely take some poses and feels solid and durable. As someone who remembers the period when DC Collectibles figures would break in an instant, I'm always happy to praise good quality. Harley has some decent arm and leg movement and a great ball jointed head. 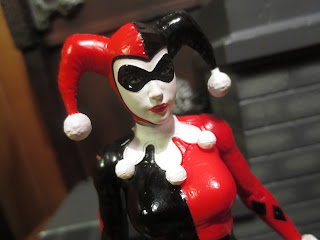 * I love this headsculpt! The paintwork is incredible and everything just looks killer. This is a perfect "real-life" version of Harley. Yeah, maybe a crazier expression would have been cool, but I kind of like this neutral face, too. It's a good look and has a very lifelike quality to it. 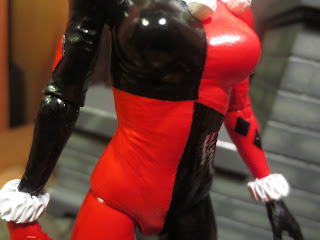 * One of the things I really like about the look of the Arkham-verse figures has been the "real-world aesthetic." While this is a pretty straight adaptation of Harley's classic Batman: The Animated Series outfit, it does look more like a real pleather outfit rather than a perfect form fitting "painted on" look. Not only are there lots of folds and wrinkles but even the diamond images on the arms and legs are actually raised elements. 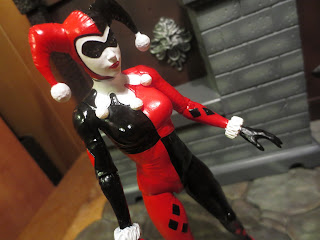 * I mentioned how incredible the paint on the headsculpt is, but the paint on the outfit overall looks fantastic, too. I love how glossy it is! It really gives Harley's suit the shine you'd expect from a latex or pleather outfit. The separation between the red and black, even on the smaller diamond details, it also exceptionally neat and clean. 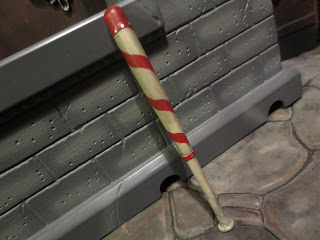 * Harley Quinn comes with a baseball bat that is extremely similar to the bat that came with the first series figure. The size seems just a tad bit different and the paint is darker, but everything else seems the same. It's a cool accessory, although a mallet might have been preferable to differentiate this more classic looking figure. 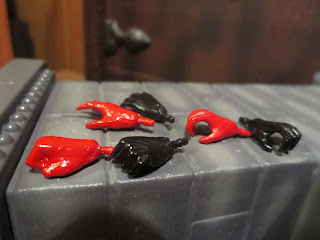 * While Harley's a bit light in the accessories department compared to the series one figure, she does come with three sets of interchageable hands. She has a set of fists, a set of open palms, and a set of grips for holding the bat. They swap easily and feel pretty sturdy. This is a nice range of hand poses and they do help to customize the figure a bit more to your liking. 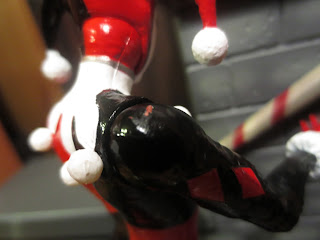 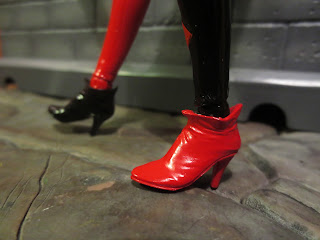 * I love the look of the high heeled short boots Harley is wearing, but the ankle joints feel weak and a bit loose. While she has some nice articulation, it's very tough to keep her standing in most poses. You're going to need a doll styled stand for anything more extreme. I think actual ball joints might have been a better call then these swivel/hinges. 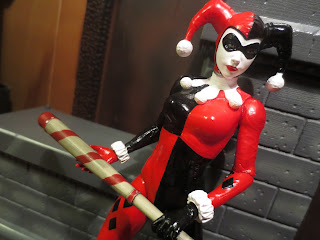 Which comic character has had the biggest increase in popularity this year? While Deadpool might be a good answer, I still think Harley Quinn has propelled herself to crazy new heights this year thanks to a continuing solid comic book, her presence in DC Superhero Girls, and, of course, Margo Robbie's excellent portrayal of the character in Suicide Squad. There are tons of Harleys out there, and this is a Great one. I wish the articulation were a bit better and that the figure included a pistol or a mallet, but it's still really cool to have this realistic version of a classic Harley Quinn for your shelf.


I think it's officially reached the point where I've reviewed so many Harley Quinn figures that she's getting her own review index, so check out all of my Harley Quinn stuff here! I'm calling it the Harley Quinndex!

For more reviews of figures from the various Batman: Arkham lines, check these out: