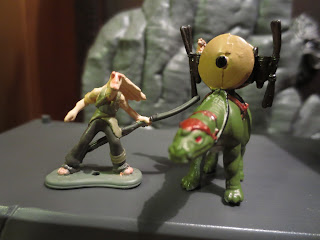 Today is part three of a five part series of reviews of the first five figure/vehicle collections from Galoob's 1999 Star Wars Episode I Micro Machines line. So, why review five of these sets in a row right now? Simple: I won them all as an Ebay lot. It was one of those crazy low Buy-it-now deals that I couldn't. I honestly think that with shipping included I paid less for each set than the original retail prices 17 years ago. Pretty rad, right? Anyways, today I'll be looking at a set that includes Jar Jar Binks, a Fambaa, Gasgano, and Gasgano's podracer, meaning this set combines two of the three biggest merchandising themes of Episode I in one set: Jar Jar Binks and podracing (the third would be Darth Maul). Ready for a blast from the past? Then join me after the break... 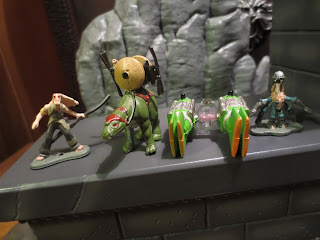 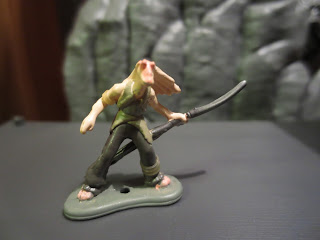 * It's a Jar Jar!!! Yup, Galoob made sure that they included a Jar Jar Binks figure available at the lower priced range and y'know what? He's pretty good. He's tall, gangly, and wielding a weapon. There are a few Jar Jar figures in the Micro Machines line but this might be the best one released. He's a pretty solid figure and a fun character. 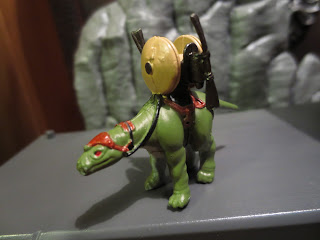 * The Fambaa is a pretty cool creature that adds something pretty different to the line. It definitely seems more in scale with the figures than your average vehicle and it's a rather intricate sculpt. I'm also loving the inactivated shield generator on his back from before the battle of Naboo. The paint is good, he's a unique figure, and he's just a ton of fun. 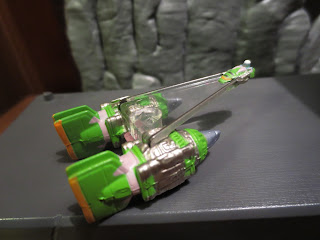 * Now, on to the podracing section of our review! Collection III comes with Gasgano's podracer. Remember Gasgano? He's the podracer who actually came in second place in the Boonta Eve Classic. No one remembers second place, though, do they? Well, now you can! This is a gorgeous little Micro Machine with some sweet sculpting, colorful paint, and even a tiny little Gasgano sculpted and painted into the pod's cockpit. This Ord Pedrovia podracer is set to finish second in all of your own underground podraces hosted on your desk. 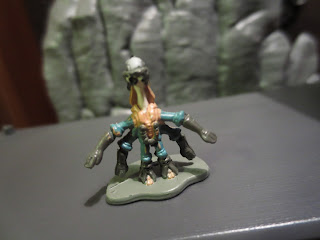 * Speaking of Gasgano, here's a figure of the six-limbed Xexto. He's a cool figure with some excellent design but I remember it being tough to get excited about these sets back in the day because it was so tough to assemble the main cast of the films. To get an Obi-Wan, Qui-Gon, Anakin, Jar-Jar, Queen Amidala, Padme, R2-D2, and Darth Maul, you had to buy a ton of different sets which made collecting this line kind of frustrating to a kid with little money. The figure's good but it's an example of some of the difficulties this line had. 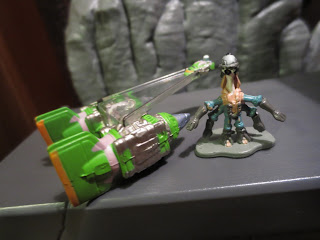 Again, this is a really impressive set of Microfigures and Micro Machines. The character selection in these sets might have been a bit unusual (there's little coherency in the sets) but that's probably less of an issue to collectors now than it was to kids back in 1999. This is still a Good and a 1/2 set, though, and if you can find it at the right price it's well worth picking up if you're a fan of Micro Machines.


I've reviewed a number of other Micro Machines from both Hasbro and Galoob, including:

Also, if you're craving more Jar Jar Binks, check out my review of the Jar Jar Binks Hero Mashers from Hasbro.
Posted by Barbecue17 at 7/01/2016