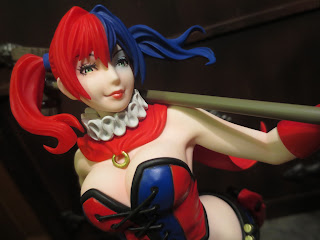 I'm a huge fan of Kotobukiya's DC Comics Bishoujo line and while I have a list of characters I still want to see in that line, I'm not opposed to the occasional variant. Today I'm looking at the newest statue in the series which is Harley Quinn in the outfit she wore during the earliest days of the New 52. This is definitely not one of my favorite Harley Quinn looks but it is a colorful and dynamic outfit, perfect for a v2 figure. Let's take a closer look at this new version of Dr. Quinzel after the break... 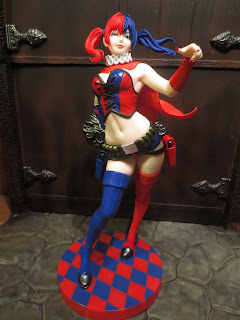 Height: 8 7/8ths inches (including base) 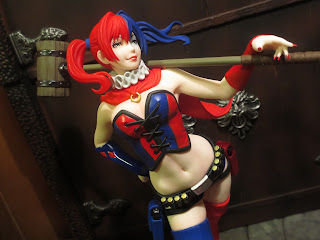 * Based on artwork by Shunya Yamashita, Kotobukiya's Bishoujo statues almost always have good poses. Harley has a great pose as she's kind of casually standing around just carrying her giant mallet. She looks great on the shelf standing alongside the other statues in the line. 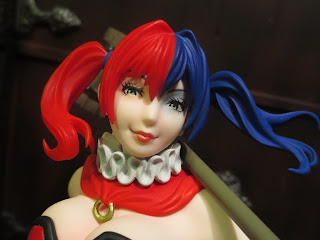 * I really like the portrait and hair here. It manages to take Harley's funky look from the earliest issues of the New 52's Suicide Squad and merge it with the Bishoujo style. It's a lovely face sculpt with near perfect paint applications, subtle red and blue eye shadow, and some excellent hair. 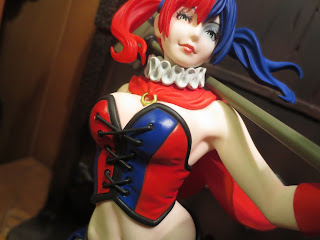 * While you might argue that there's not much coverage to this costume, there are quite a few different articles of clothing that make it up. Not only does Harley have the ruffled jester's collar but she's got the gold clasp for her cape and a rather detailed corset. The paintwork is excellent on all of these items. I'm always so impressed by how clean and neat Kotobukiya's paintwork is! 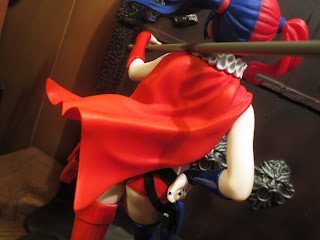 * A short cape was actually a part of this particular outfit, so Kotobukiya made sure to include it here. I like how it's sculpted as if it's blowing in the breeze. It gives her a much more dynamic look and just helps to sell the cape. Capes just look so darn cool and dramatic, don't they? 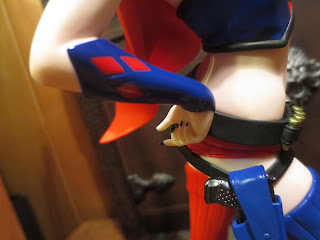 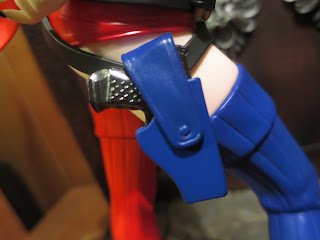 * Harley is packing two pistols in the holsters on her hips and, while they're not removable, they look like they could be. I actually think these are separately sculpted items tucked down into the permanently closed holsters. They look great. 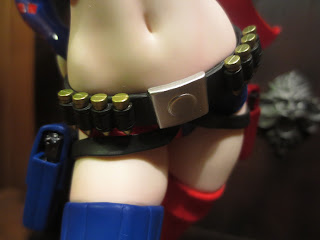 * Harley's belt has a few spare rounds of ammunition on it. While these aren't actually removable pieces they sure do look like it. The sculpt and the paintwork is excellent here. Why carry around random bullets, though, rather than magazines? Not as dynamic looking is my guess. 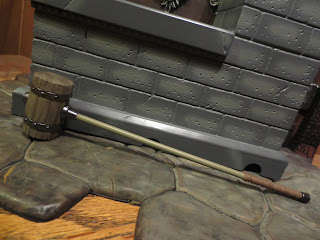 * While it's intended to be displayed with the figure (as she would look a bit odd without it), Harley's hammer is a separate piece that attaches to the figure. The wood grain sculpt of the head of the hammer is nicely captured here and even features a dark wash, while the metal bands surrounding it have a metallic sheen. 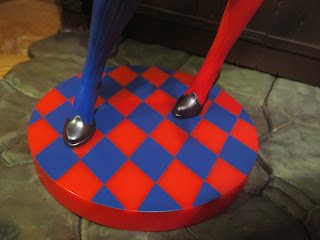 * Harley comes permanently affixed to a display base that not only keeps the figure standing securely but that also has a cool blue and red diamond pattern. It matches her outfit quite well and looks great! 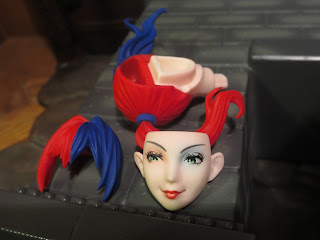 * Here's an interesting fact about this statue: Her head and left forearm are removable. Why is that? Because there is an alternate NYCC limited edition version of this statue with a different headsculpt, weapon, and left hand. You can actually interchange the face plates, hair, and left forearm to customize the figures a bit more if you have both. I do happen to have both, and I'll be reviewing the exclusive in a week or so. 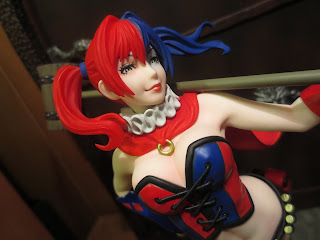 I'm almost always impressed by Kotobukiya's work on this line. The sculpting, paint, and overall quality on this line is just nearly perfect every time and, I'm happy to say, this New 52 version of Harley is another Epic figure. I love her, even though this isn't the outfit I would have chosen for a second version of Harley Quinn. Stay tuned over the next week or so as I'll be checking out the NYCC 2016 exclusive version of this statue. Spoiler: It's also really, really good.

I've now reviewed so many Harley Quinn figures and statues that I've given them their own mini review index: The Harley Quinndex!

For more reviews check out the following: