Minifigure Review: Flesh Pack B from Gorelords by Violence Toy 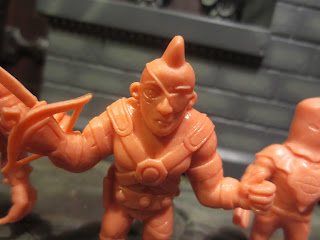 Today I'm looking at the second pack of figures from Violence Toy's Gorelords and I think that this one is my favorite of the four. Consisting of three Mutant Death Match Fighters, Doc Marauder, Gumongous, and Arthur, this set has three fighters that look like they would fare really well in a gladiatorial arena. These little guys have extremely sharp sculpting and have a nice, solid feel. They're very M.U.S.C.L.E.ish, which is typically some of the highest praise you can give a minifigure. Let's take a closer look at this trio of warriors after the break... 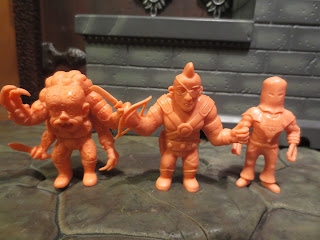 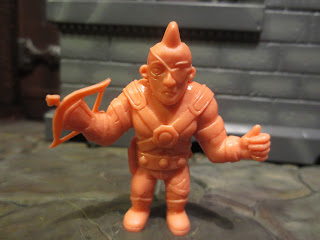 * It's tough to pick a favorite in this series, but Doc Marauder certainly is in the running. The high points? The spiky mohawk, the revolver on his right hip, the gladiator inspired chest harness, and, oh, the fact that his RIGHT HAND IS A FLIPPIN' CROSSBOW! How cool is that? I've loved wrist mounted crossbows ever since Road Pig came with one in the vintage G.I. Joe line. 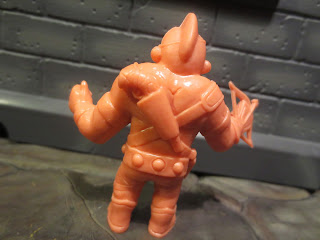 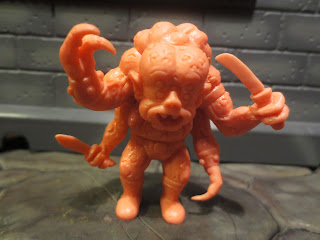 Gosh, Gumongous really might be my favorite, though. He's just so gnarly. Four arms. FOUR ARMS, and each with massive claws. He's also two knives, because why the heck not? This guy reminds me a bit of a smaller version of El Gigante (the Resident Evil villain, not the wrestler) but with more mutant-like features. The little details on this guy are awesome. 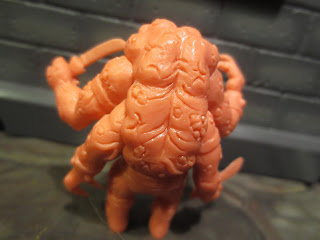 * Uggh!! Flip Gumongous around and he's got some really nasty stuff growing on his back. What the heck is that? Is it muscle or something far more disgusting? I have no idea but I'm loving the look of this guy. 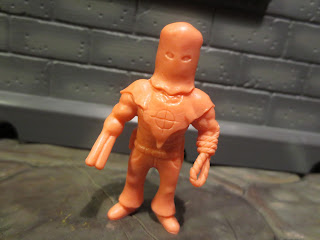 * Man, I really think Arthur might be my favorite. I mean, I'm not sure why he's called Arthur when everyone else has names like Snotpile or Maggotgagger, but who cares. The dude is rocking a hood, some sweet pants, and comes dual wielding two weapons: A doublebarreled shotgun on his right hand and a noose on his left. How cool are both of those? I love the idea of a noose on his hand. It seems impractical, but I'm guessing he makes it work for himself. 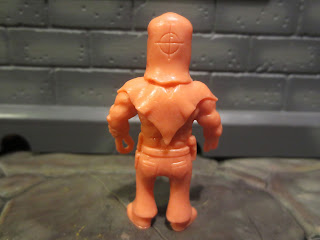 * Flip him around and you might get a better glimpse at the knife on his left hip and the pistol on his right. Why would a guy with no hands do with a pistol and a knife? Who cares! I'm just digging the detail. Besides, maybe he swaps them out. Or maybe he's telekinetic. I'm also digging the bullseye on the back of his hood. It's almost like a taunt to his foes. 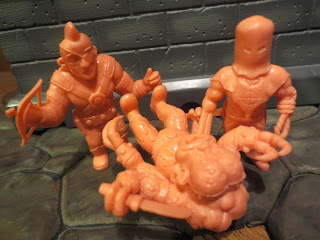 This is without a doubt my favorite set in series 1. I love the crazy weapons these fellows come armed with (literally in two of their cases) and they seem to have a lot of personality. Then sculpting is great and Violence Toy has captured the look and feel of the plastic of other similar lines while giving these guys a unique feel. I know they're not characters from the videogame Manhunt or bad guys from the movie The Running Man, but I want to believe that for some reason.


I'm going to be reviewing all of these figures over the next few days (I reviewed the first set yesterday) so keep checking back for more cool little guys.
Posted by Barbecue17 at 11/06/2016