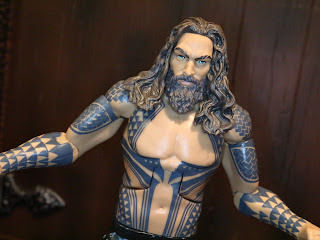 We're now in 2018 and it's time for me to do two things before I start doling out my best of 2017 listsin late January: Pick up the last few items I want from 2017 and check out all of the cool stuff I received for Christmas! I received some great stuff for Christmas this year and today I'm starting out with one of the just so-so items: The Toys R Us exclusive shirtless Aquaman from Mattel's DC Comics Multiverse line. Based on the Justice League film, Mattel released a shirtless version of Jason Momoa's Aquaman quietly at the end of the year. While the BvS version of Aquaman was also not wearing a shirt, the main Justice League version of Arthur is wearing a full outfit and thus hides his really cool tattoos, so I can understand why Mattel wanted to get this guy out there. Doesn't mean I wouldn't have rather had Lois Lane, Antiope, bald Lex Luthor, Commissioner Gordon, Alfred, or even Deathstroke in his place, though. Let's check this guy out after the break... 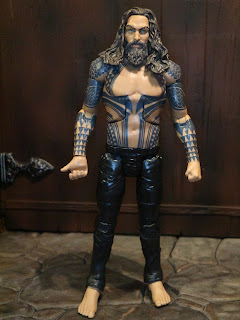 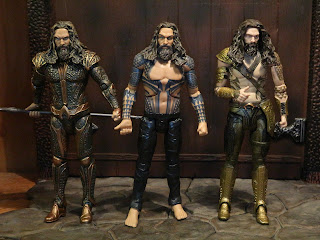 The TRU exclusive Aquaman sans shirt is here in the middle, looking even more like Khal Drogo than any Aquaman before. On the left is the standard Justice League version while on the right is the BvS version.  While the Justice League versions look to share headsculpts, this Aquaman doesn't share parts with any other figures. 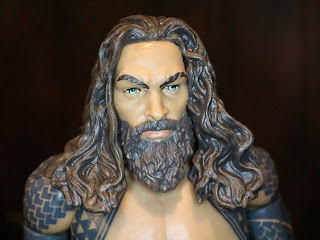 * I think the headsculpt is the same as the standard version but the paintwork is different. There's less blonde in the hair although the details and paintwork are still really sharp and clean, particularly on the eyes. This is still a really good headsculpt. 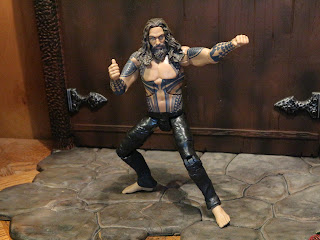 * Aquaman is definitely not the best figure in the Multiverse line but his articulation is adequate. It's not great but you can still strike some poses and play around with the figure without worrying about breakage. He's a good, sturdy toy. 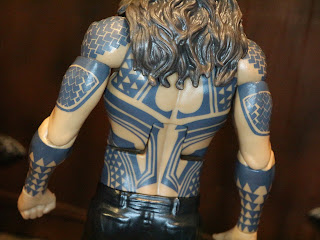 * The tattoos are definitely a bit too "fresh" looking but they're nicely printed onto the figure's arms and torso. I like the design here. 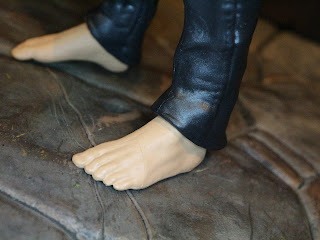 * Interestingly, Aquaman is barefooted here. It does make for a more unique looking figure and the way the jeans drape over the ankles is kind of cool. 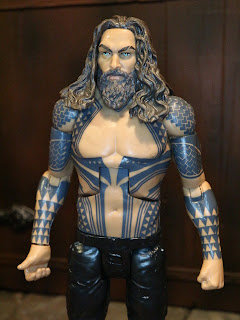 
* Aquaman looks.... unusual. There is something that just seems off about the body. I think it looks too large and too "flat" to fit in with the look of Aquaman's headsculpt. It's just an odd looking figure that doesn't seem like it should fit together. 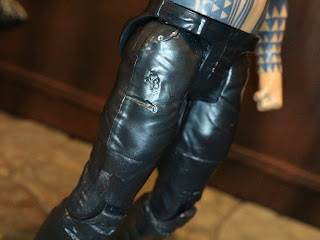 * Aquaman is wearing some standard slacks that look to have some wear and tear on them. There are some sculpted rips and tears but they're not given any paint applications, leaving them looking very boring and dull. 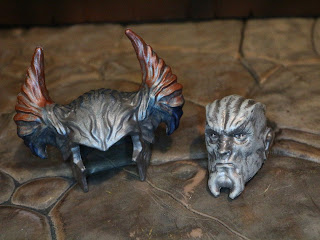 * Most of the Toys R Us exclusive DC Comics Multiverse figures have included some very cool extra pieces for various Collect & Connect figures. Shirtless Aquaman includes... Steppenwolf's head? This time it features a removable helmet, though. It doesn't look any different, though, meaning you're kind of getting something you already have. I guess you could buy this instead of the Superman figure, though. It's not bad, but it is a disappointing inclusion. 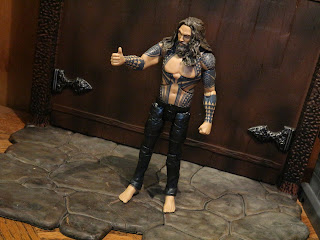 This version of Aquaman could have been a really cool figure. Some snap on waves, similar to Mera's water effects, a stronger sculpt, and better paintwork would have definitely improved things. It would have been cool to either get an actual different Collect & Connect piece or even simply a larger accessory to round things out. Unfortunately, what we guy is probably the definition of Eh. He's dull and quite boring, really, which is a shame.

If you're looking for more Aquaman action figures I've also checked out the BvS Multiverse Aquaman , the Justice League Aquaman, and the DC Nano Metalfigs Aquaman from the Pack B 5-pack.