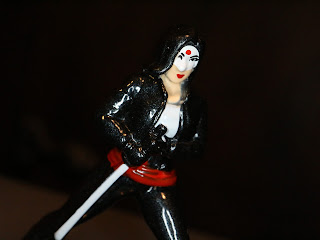 This year in my stocking I found a very cool little gift: The DC Nano Metalfigs Katana from Jada Toys! Based on her appearance in Suicide Squad Katana is sporting her Katana and her sleek black outfit. 2017 was a great year for Katana themed merchandise and this little minifigure is just the icing on the cake. I'm a big fan of this line and I'm eager to see if Jada announces more new figures at Toy Fair. Everywhere I go the DC and Marvel Metalfigs seem to sell through like hotcakes so there is clearly an audience for these little heroes and villains. Let's check out this little metal version of Tatsu Yamashiro after the break... 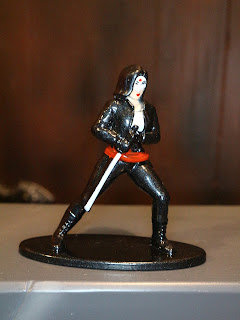 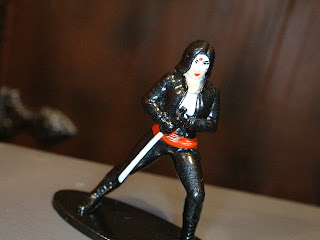 * I really like Katana. She has some excellent small paintwork, particularly on her face, and a pretty cool pose.  While wish the sword wasn't sculpted as part of the leg I guess Jada Toys didn't want a long, thin metal blade to inadvertently stab some kid. The paint on the blade is a bit messy but everything else is solid. 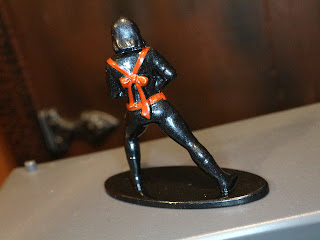 * Turn Katana around and you can see the complex red wrap that she wears over her shoulders and around her waist. Again, considering that she is less than 2 inches and molded in die-cast metal, the detail on the sculpt and paintwork isn't bad at all. 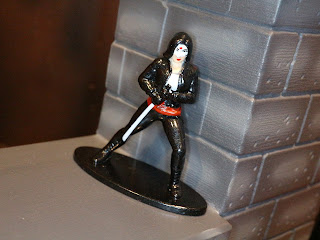 At this point you should easily be able to decide if this line is for you or not. As a minifigure fan who loves DC characters I was really attracted to this line. It has a great selection of characters that are nicely done at a low, low price (around $1 or less!). Katana is the third of the Suicide Squad themed figures (along with Harley Quinn and the Joker) and is a welcome addition although at this point, sadly, it seems no one is ever going to give us a complete team from the film (even Funko left out the ill-fated Slipknot). Still, Katana is a Good and a 1/2 addition to the line.