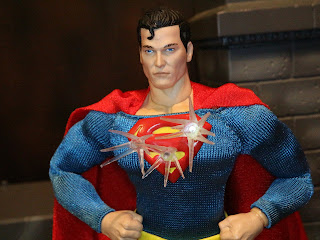 I've got two more reviews to finish before I announce my Best of Picks from 2017, and both of them are One:12 Collective releases: Deathstroke and Superman. I reviewed the Red Son variant of Superman last week but today I'm reviewing the classic Superman. Classic Superman was released near the end of the year (maybe November?) but I just picked mine up a few weeks ago. There were a lot of One:12 Collective releases during the end of 2017 and I had to space out purchasing them a bit. I definitely think it's safe to say that Superman has been one of the most luke-warmly received figures in this line yet. While most figures have been pretty universally loved, collector reactions to Superman seemed to have been quite mixed. Superman definitely has some flaws. He also, however, has some of the coolest features I've seen in this line. Let's take a closer look at Mezco's take on the Man of Steel after the break... 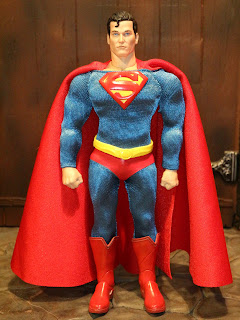 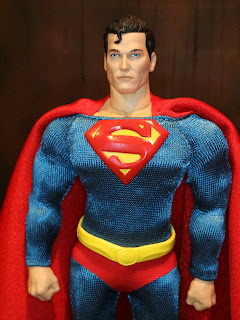 * Overall I really like Superman. While figures in tactical gear and armor like The Punisher or Green Arrow largely avoid what some folks refer to as the "Mego look," figures in colorful, classic superhero costumes definitely have that appearance a bit, particularly when they're posed fairly neutrally. While Superman has a bit of the Mego look, he's also quite nice with bright, bold colors that don't shy away from the character's classic appearance. While this is definitely Mezco's take on the classic Superman look, it's still very much an idealized classic Superman. 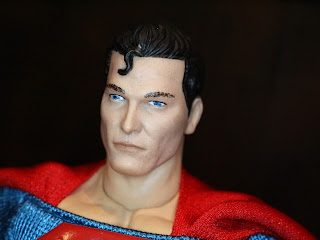 * I like the headsculpt. It actually looks to be the same headsculpt as the Red Son Superman figure but the paintwork is so different that you may not notice it at first. The paintwork is extremely clean and neat and works for a rather neutral Superman appearance. I'm going to reference the lack of a "smiling" headsculpt when I get to the negatives but, for now, this is a nice Superman headsculpt. 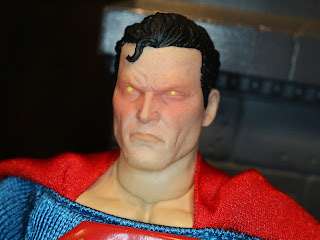 * Superman's alternate head is an angry head that shows off his heat vision. I like it. I will admit that it looks kind of weird in pictures (I though so until I had this figure in hand) but in person the headsculpt is quite impressive. While the paintwork looks too subtle in enlarged pictures it perfectly captures what its going for in person. I can't think of an action figure line that better epitomizes the phrase "you gotta see these in person" better than One:12 Collective. 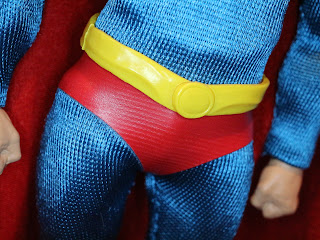 * Superman's trunks and belt came out really great. You get the bold primary colors with some shorter trunks that are a permanent part of the outfit (and not a separate piece). I think a lot of folks were all over the place on what they wanted to see here but I really like how the trunks turned out. 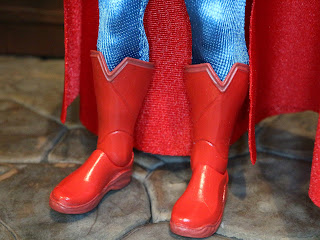 * Superman's boots are pretty cool, too. I like the design and the paint applications that give them some more depth. They're not just plain red which really helps to bring the costume to life. 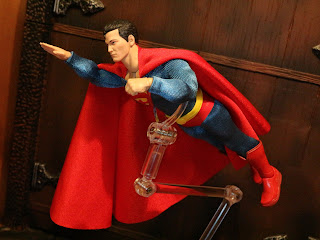 * Superman has terrific articulation. He has all of the functional but hidden joints you would expect from the One:12 Collective line and they all work great. A simple costume like Superman's is really conducive to taking good poses. I love how he looks in flying poses, too.  Has any company made a Superman figure that actually looks decent in flying poses?  Thanks to the balljoint at the base of the neck and at the base of the head you can have him actually look forward. With the help of the posing stand you can display Supes flying all day long! 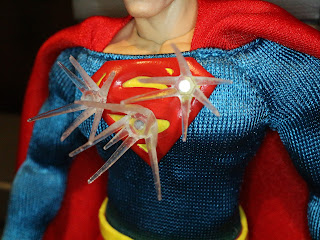 * If you want to know the number one thing that sold me on Superman, it's these bullet effects. Superman comes with three of them and they look awesome on display. They work together with his "S" emblem using tiny magnets to adhere easily and make it appear that bullets are bouncing off of the Man of Steels's chest. It's a wonderful feature and looks very, very cool on display. 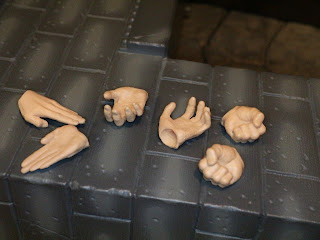 * Superman includes three pairs of hands that swap out easily. There is a pair of fists for punching the bad guys, a pair of open palms for flying poses, and some grappling hands for grappling with super villains or ripping chains off of his body. 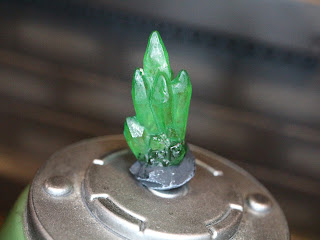 * Superman also includes a piece of Kryptonite. How interesting that Superman figures so often come with an accessory of his greatest weakness, right? You don't usually see any other superhero come with their weaknesses. Still, this is a great accessory and you can use it to create some cool displays for your figure. The translucent green plastic looks great here and shows some very nice attention to detail. 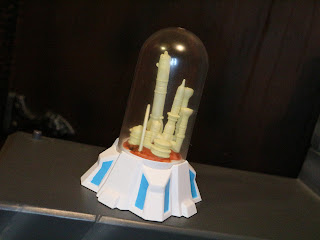 * Some folks will probably disagree with me that the bullet effects are the coolest accessory included with Supes. My guess is that most people will really dig the bottled city of Kandor. We don't usually get accessories like this and it's a very welcome and very cool extra. Mezco gave you a whole city as an accessory. Just let that soak in a bit. 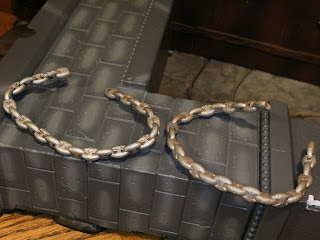 * Superman also comes with some steel chains that can be posed around him. They're bendable but they have awesome paint jobs to make them appear very realistic and perhaps even a bit weathered and rusty. 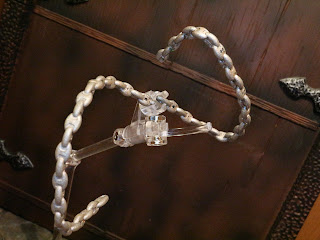 * Included with the chains is a clear plastic attachment for the display stand that holds the chains in place. Want to pose Superman as if he's breaking the chains off of his body? Go for it! This little extra definitely shows how much thought Mezco puts into their figures. 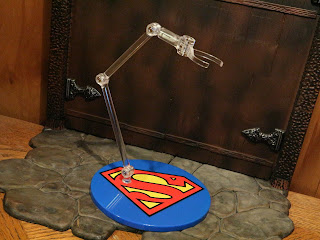 *  Superma also includes the same clear plastic display arm that most other figures include. It can be inserted into the included display base where the foot peg is (you just have to remove the peg) and allows for some great, secure poses here as the joints are very tight on the display bar. It will absolutely support the figure's weight. Kal-El looks great flying and in various floating, fighting, and combat poses. 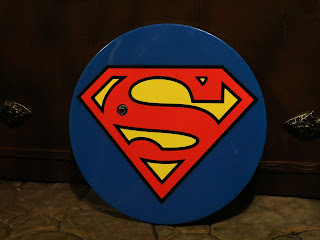 *   Like every other One:12 Collective figure, Superman comes with a personalized display stand. His is iconic Superman "S". The peg to hold the figure on the stand is positioned off center to give the figure plenty of room to stand or strike a dramatic pose. 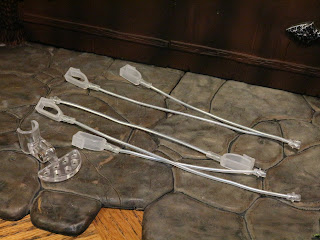 *  Also included to attach onto the display stand is a clip that can hold one or all five of these bendable clips. They're intended to be used to pose Superman's cape. I don't have the patience to use them but they're a great extra that add a bit more value to the figure. 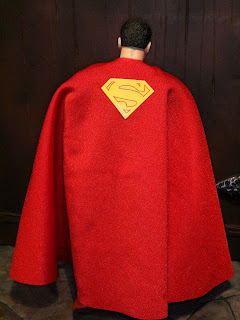 * Superman's cape is pretty nicely done. I like it's simplicity although I do with it had the anchors that the DKR Batman figures had on the cape to help give it a bit more weight. It's made from a thinner material than the Red Son Superman's cape but it's a bit shinier and seems fitting for a more classic super hero costume. 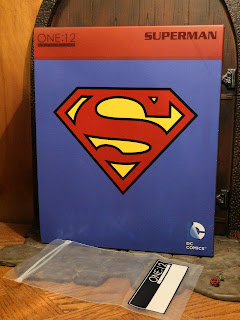 *   Mezco makes these figures very easy to store. For longer term storage, it's nice to know that the gorgeous boxes these figures come packaged in are completely collector friendly. Second,to keep the extra hgeadsculpts and hands close by when not in use, Mezco also gives you a cool branded bag. It's just a simple plastic bag with a Ziploc styled closure, but it's appreciated. Superman has the standard Mezco five panel box with a magnetic flap and a removable slip cover. 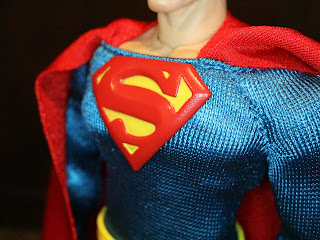 * It's clear that Mezco had to hide the metal/ magnets for the bullet effect in Superman's emblem. Still, I'm not sure that I like the raised emblem. If the costume were a bit more armored then the raised logo would look OK. For a classic costume, though, something flat would have looked much better. 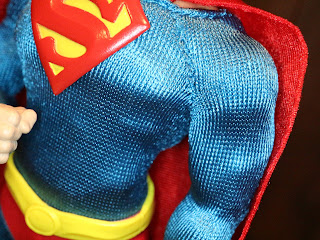 * I don't like the shinier material on Superman's suit. It's a bit too reflective for my taste and just looks "off" a bit. 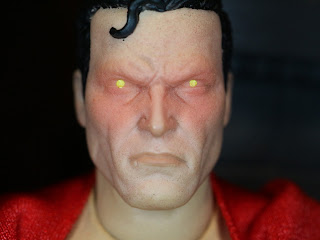 * Superman comes with a standard face and an angry face but why doesn't he come with a classic grinning portrait? Considering Shazam got one this seems like a huge oversight. 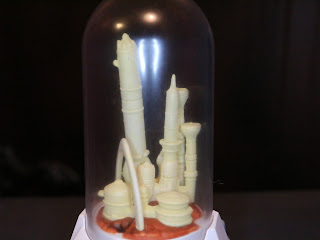 * Do some of the towers of Kandor look a little lopsided to anyone else? Barring the fact that maybe there is a crazy silver-age Superman comic with the leaning tower of Kandor, this is frustrating because there's no way to straighten it. It's locked inside the bottle! 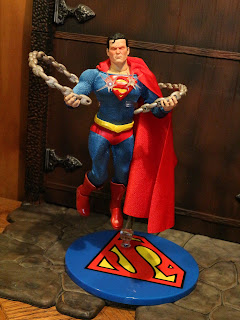 While there are definitely some legitimate complaints about this figure, you know what? I like him. I really, really like him. While the figure itself isn't as impressive as past One:12 Collective offerings, the accessories are world class. Whether it's Kandor, the bendable chains, or the bullet effects there are a number of really cool accessories for the figure to interact with when you're displaying it. He's such a necessary figure for a DC Collection and while I'm sure we'll get another Superman at some point (this one seems to have sold really, really well) this guy is a key part of any Justice League display. He's a Great and a 1/2 figure and well worth tracking down while you can. The price on this guy seems to have increased quite quickly. 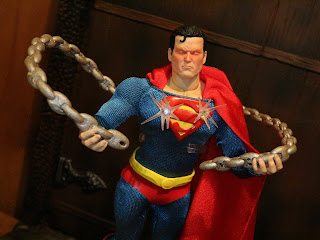 
If you're looking for more One:12 Collective: DC Universe reviews, check out the following: