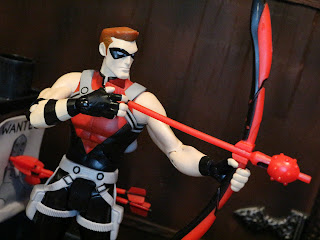 While I was at the Shelby Comic Con in Shelby, NC this past weekend I found a vendor selling some pretty cool DC stuff. I purchased three items, one of which is the subject of today's review: Red Arrow from Mattel's 6 inch scaled Young Justice line. I know Young Justice is getting ready to make a comeback but I have to admit (with some embarrassment) that I have yet to watch it. That doesn't mean I'm not a fan of most of the characters, though, especially Red Arrow. Red Arrow, AKA Arsenal, AKA Speedy, AKA Roy Harper has definitely become one of my favorite superheroes over the past few years thanks to his excellent role in the New 52's Red Hood and the Outlaws and in the Rebirth book Titans. While he mostly goes by Arsenal now (currently Emiko Queen, Ollie's half sister, is using the Red Arrow name), this figure still is a pretty good representation of Roy Harper. Let's check it out after the break... 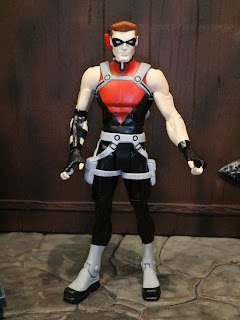 Accessories: Bow, 4 arrows, and a rooftop display base 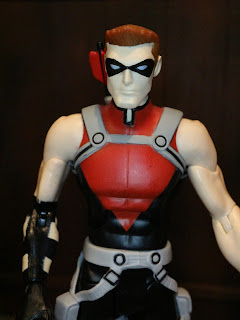 * While Red Arrow uses some of the DC Universe Classics body the reuse is really quite minimal. He's has plenty of new parts and a very distinctive paint job that definitely helps him to stand out from the crowd. When you look at Roy, you're definitely not going to be thinking that he's just a simple repaint with a new head. He's very sleek with an animation styled design but I still think he could fit in passably with the rest of your DC Universe Classics/ DC Comics Multiverse collection. The red and black color scheme is pretty slick, too; it'd be cool to see him teamed up with the Red Hood, Batwoman, and the New 52 Robin as part of a team red and black deal. 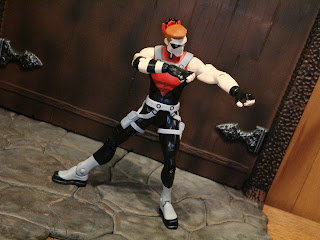 * Red Arrow has the same articulation as most of the other Mattel DC figures since the DC Superheroes days. In fact, he even has swivel/hinges wrists, something not even all of the current Multiverse figures have. He's pretty sturdy and can take some great poses, too. 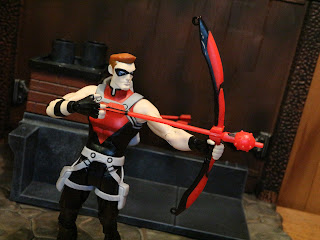 * It may not be the perfect archery pose but Roy still can get into a pretty convincing archery pose thanks to his articulation, the positioning of his hands (one is posed to hold the tip of the arrow), and the length of the arrows included. The fact that the arrows clip onto the edges of the bow also help to sell the effect, making Red Arrow appear to be a rather formidable archer for your shelf. 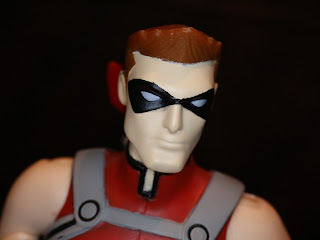 * The headsculpt is somewhat simple and stylized, but it works for the Young Justice line. While the style is simple it definitely isn't overly caricatured, so you should be able to mix him in with other DC lines without him sticking out too much. I like the short hair style and the simple domino mask. It's a simple but classic look for Roy. 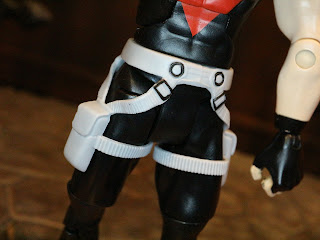 * Red Arrow is wearing a belt with some tactical pouches strapped around his thighs. It's a separate piece and while it isn't removable it certainly does give the figure a more complex appearance. It also doesn't affect his articulation nearly as much as you might think it would. 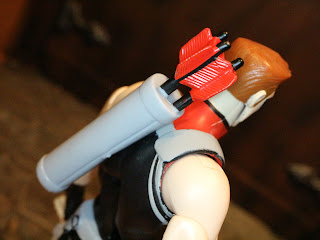 * There is a quiver of arrows on Roy's back. They might appear too short but they look pretty slick and help ensure that Red Arrow is always ready to launch another arrow. They're not removable from the quiver, nor is the quiver removable from Roy's back. 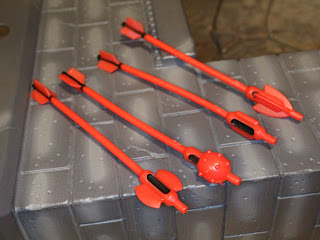 * The Red Arrow includes four red arrows: One looks like a standard hunting styled arrow with a broadhead tip, one appears to be a sonic or maybe a gas dispenser tipped arrow, one has a large mace on the end (maybe it explodes?), and one has two large blades on the sides. Each arrow does feature some minor black paint highlights. 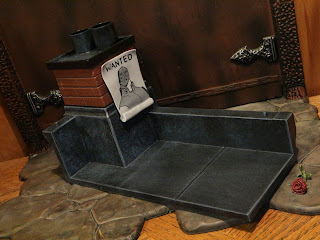 * One of the coolest things the Young Justice line offered were very nicely sized and decorated display bases. Red Arrow comes with the edge of a building rooftop that features a chimney, a few foot pegs, and a wanted poster of the Sportsmaster. The paintwork and sculpting on this is excellent and really makes for an incredible way to display the figure. Apparently Red Arrow's display base also attaches to the base included with the Young Justice Robin (which I don't own), allowing for a larger display. 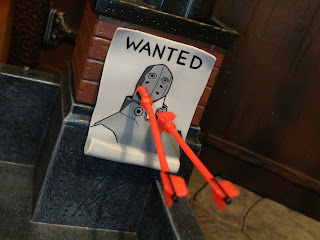 * The wanted poster for the Sportsmaster is quite cool. Not only is it made of a softer material (a flexible plastic) but it features two holes so that Roy's arrows can penetrate the image as if it is being used for target practice. Groovy. 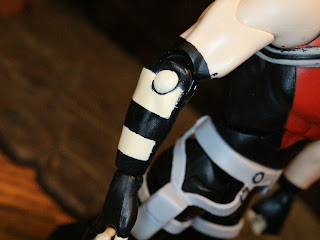 * There are some fairly messy paint applications on Red Arrow, particularly on the edges of his boots and on his gloves and arm wraps. The paint just has a fuzzy, uneven appearance along the edges. 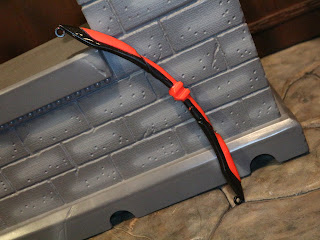 * I have two problems with Red Arrow's bow. First, it doesn't have a bow string on it. Lots of Mattel's figures around this time had these missing (apparently due to safety concerns) so it's not unexpected. At least there are loops so you can tie your own string on there. Second, the paintwork on the bow is kind of messy with lots of rubs and errant paint splatters. 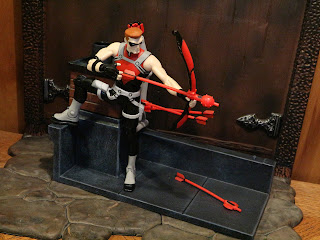 While I skipped most of this line when they originally were released, I think I may have to go back and pick up some more of these. Mattel did a really nice job with the figures in the 6 inch scaled Young Justice line (the character selection and release cycle were the problems), particularly in regards to the accessories and display bases. Red Arrow is a Great and a 1/2 figure and I have no regrets in picking him up. He's not a DC character we see all of the time and having another version of him is always welcome.

If you're looking for more Roy Harper/ Arsenal/ Red Arrow/ Speedy figures, I've also reviewed the Arsenal figure from the DC Collectibles Red Hood and the Outlaws series and the One:12 Collective Arsenal.