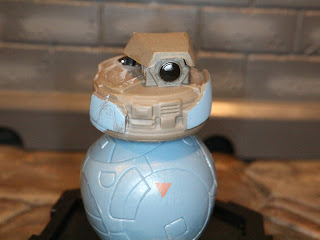 My Christmas haul is winding down and this time I'm showing off another stocking stuffer I received: A Resistance BB Unit from Funko's Star Wars Mystery Minis. The Mystery Minis are little blind boxed minifigures with bobbling heads to presumably get around a licensing restriction that Hasbro has in place. While they are available everywhere Wal-Mart has exclusive case packs that include three additional figures in the series from The Last Jedi: A Praetorian Guard with a whip sword, Kylo Ren, and the Resistance BB Unit that I'm reviewing today. His rarity is 1/12, meaning that he's included in one out of twelve boxes. That's pretty average (only Captain Phasma and BB-8 can be found more frequently) as there are some figures that are pretty rare and come packed 1 in every 72 cases. I do pick up a lot of Funko stuff but crazy chase figures are a prime reason I don't collect any of their lines seriously. This little guy may have only appeared in the film briefly but he does get a mention in the visual dictionary for the film. I think this is supposed to be the droid the book refers to as 2BB-2.  Let's call him 2BB-2, shall we? I like that a bit better. More on 2BB-2 after the break... 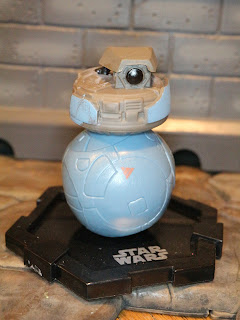 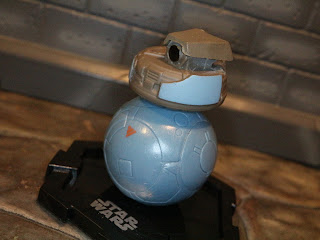 * 2 BB-2 is a cool looking little droid. He's definitely not adorned with a flashy paintjob, though. He looks like a workhorse with his basic blue and gray paintjob. Of course, all of the details you would expect on his spherical body are present so he's more than just a little round ball. 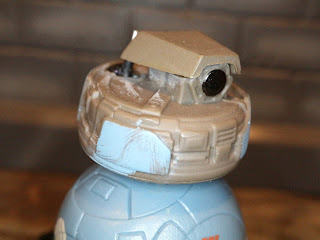 * 2BB-2's head is quite different than BB-8's rounded dome. He has more of a truncated cylinder for a head with an unusual lens and antenna on top. I think the idea is that 2BB-2 doesn't have an actual full dome on, so he's kind of stripped down a bit. 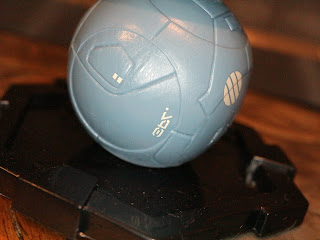 * I like the little details painted on his body, particularly the aurebesh lettering. While it looks to be reversed, I can't confirm that this isn't accurate to the film. Maybe he has revered lettering for some weird reason? The printing is nice and neat, though. 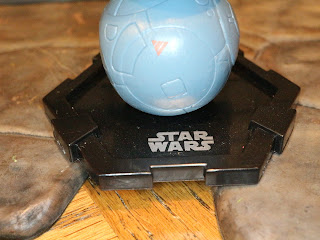 * To help keep him from rolling away 2BB-2 is permanently affixed to a black plastic base with the Star Wars logo. If you have more than one Star Wars Mystery Mini you can attach them together via the "teeth" on the sides. 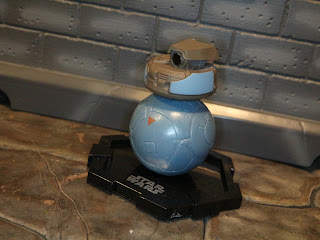 2BB-2, the Resistance BB Unit, is a cool little minifigure. I definitely am not a fan of the blind boxed format and the chase variants that Funko fills these lines with but I do really like the quality of the sculpts, the paintwork, and the style. This little guy already exists as a POP! and in a Disney parks exclusive Droid Factory set, so having three figures made in his likeness is pretty cool for a guy who can't even get his name on the package. He's a Good and a 1/2 little droid to add to your shelf (though I really wanted Kylo Ren, Rose, or a Porg).

This is the first 2BB-2 figure I've reviewed.

If you want another Star Wars Mystery Mini review you can check out my look at Luke Skywalker (Jedi Exile).
Posted by Barbecue17 at 1/11/2018