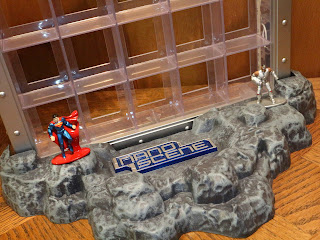 One of my favorite toylines of 2017 is the Nano Metalfigs from Jada Toys, specifically the DC Comics figures. There is just something about these little die-cast metal heroes and villains that I love. To be absolutely honest, I'm almost as excited to see what Jada announces new for this line at Toy Fair 2018 as I am to see what  Hasbro, Mattel, Kotobukiya, DC Collectibles, and Mezco announce for a few of my favorite lines. The Nano Metalfigs line covers a few different properties (DC Comics, Marvel, Disney/Pixar, WWE, and Harry Potter) but today I'm looking at a very cool light up display case that is designed to work with any of them. I first learned of this case around November and decided that it would make a nice addition to my Christmas list. I love minifigure displays and this seems like a great way to show off more of these well made little metal superheroes. Let's take a closer look at this cool Nano Scene Light-Up Collectible Case after the break... 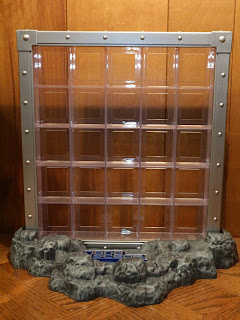 Parts: Display rack and base. 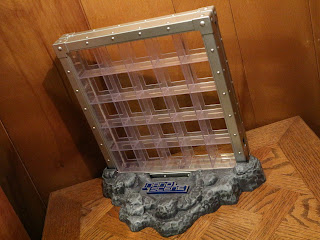 * This is a very cool, generic display that can be used for any of the Nano Metalfigs made by Jada Toys. Heck, you can use it for other minifigures, too. The display case has two ways it can be used. First up is standing upright in the base so it can rest on any flat surface. 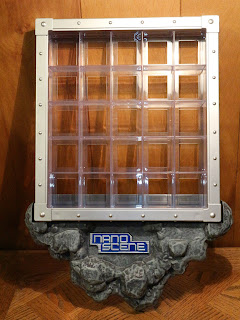 * The second option is that you can change the base around so it rests flush with the case itself, allowing you to hang this on a wall. There are brackets on the back of the case so you can use some small nails and hang this somewhere. That's a pretty cool idea and while I'm not planning to do that at the moment, I'm tempted to find a place to mount this. 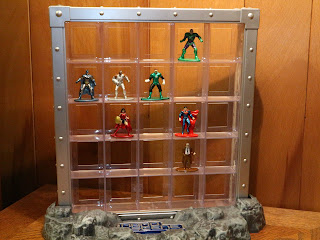 * The display rack is made from translucent plastic and has five rows of five compartments designed to hold the Nano Metalfigs. The backs of each display cubby have a small section gut out but they still have a lip around the back opening, preventing any figures from falling through the back. 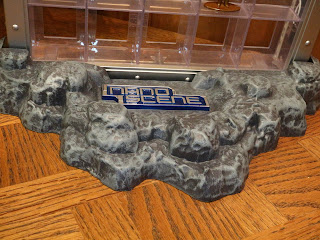 * The base looks pretty cool. It's a rocky scene with the "Nano Scene" logo as a raised plastic accent. You can definitely stand a couple of figures around this ledge, too. 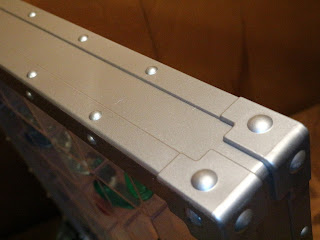 * The edges of the display case are plastic but they have a metallic appearance to them that thematically fits nicely with the die-cast metal nature of the line. 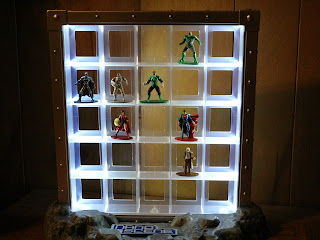 * Ready for a super cool feature? The case lights up! Slap some AAA batteries in this thing and flip the on/off switch and the LED lights around the edge light up to show off your collection. This just looks really cool and I really want to use it as a nightlight. 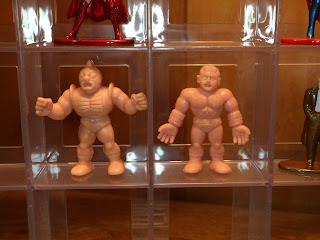 * I had to include this because, yes, it can hold most M.U.S.C.L.E. figures, too. So long as a figure is 2 inches or less you should be good. I can see this becoming very popular with minifigure collectors. 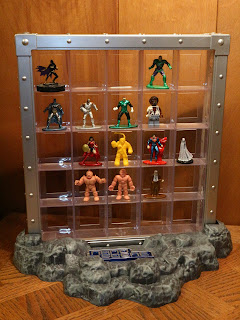 For under $20 dollars this is an incredible display option. It's neat, versatile, and has a very effective light up feature. While it only holds 25 figures, at this price you wouldn't feel like you're being unreasonable if you snagged one or two more to showcase more of your beloved minifigures. I'll probably keep mine in service to the DC Nano Metalfigs right now, but it's nice to know this is versatile enough to be used for a number of lines. This is an Epic little case and one of the coolest toy related peripherals I've purchased this year.