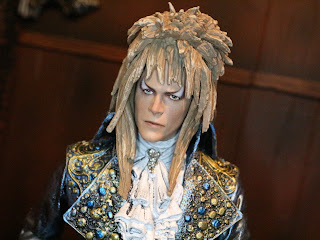 Another figure I got for Christmas was this very cool Jareth the Goblin King from McFarlane Toys. Wait... McFarlane Toys? McFarlane as in Todd McFarlane? The Spawn company? Yes. McFarlane Toys. I know I've reviewed a few of the Walking Dead building sets that I found on clearance for various 31 Days of Toy Terror countdowns but the last new McFarlane Toys figure I picked up was Cortana in 2014. Prior to that? Who knows? Maybe one of the Infernal Parade figures? A later release from the Movie Maniacs line? Anyways, Jared is technically part of McFarlane's Color Tops range of products which simply seem to be the overall identifier McFarlane is using for their 7 inch scaled releases but the packaging proudly bills this as a Labyrinth release. Being a fan of both David Bowie and Labyrinth (as are my wife and my 4 year old) I knew this would end up in my collection sooner rather than later. It's really cool to see McFarlane back to doing random movie characters in this scale, so let's get cracking on this review of Jareth the Goblin King... 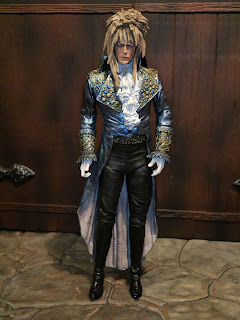 Accessories: Masquerade mask, crystal orb, and a display base. 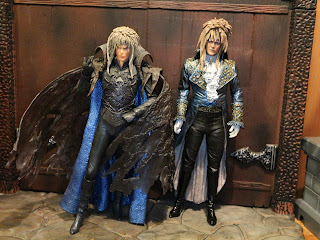 * Here's a comparison between the NECA Jareth from 2007 (on the left) and McFarlane's Jareth (on the right). You know how it seems like NECA has spent the past decade doing everything McFarlane ever did better? Here's an instance where McFarlane takes the upper hand. The scale isn't too terribly off, though, as NECA's figure is standing with his knees bent. If he were standing straight up they would both be the same size. 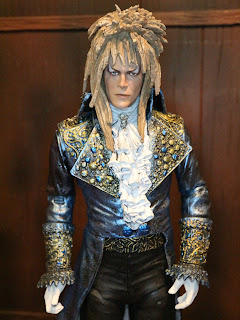 
* This is an amazing looking figure. Labyrinth is beautiful movie with some incredible character and costume designs and McFarlane shows that off well. Jareth is decked out in the outfit he wears in Sarah's dream of the masquerade party. It's a great look and one of the outfits that NECA didn't tackle which was probably a wise decision for McFarlane to start with. 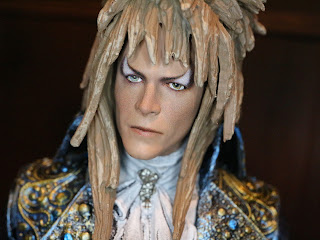 * The likeness to David Bowie is excellent. This is an incredibly realistic looking portrait, even when up-sized a bit through pictures. The paint is on point and gives the figure an eerily lifelike look. 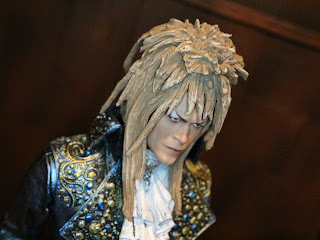 *Jareth's hair is one of his most defining features and McFarlane did an excellent job with it. It's very complex and features multiple layers and a light dry-brushing effect to give it some texture and depth. 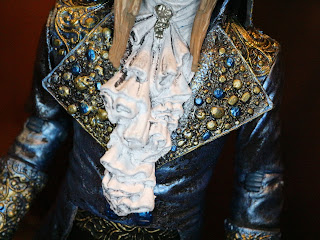 * McFarlane uses elements of their signature paint style here while also offering up some neat and clean work on the individual shiny bits of Jareth's evening wear. The ruffled scarf is particularly well sculpted. 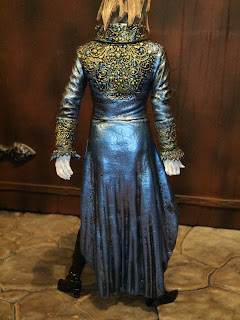 * The coat also has multiple paint effects that give it the look of a blue, shin material. I love the work here! It's quite impressive and definitely reminds me of the way McFarlane used to do things. 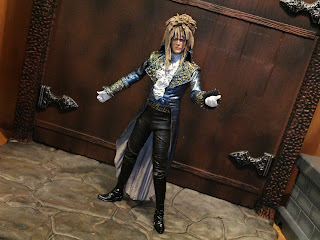 * First things first: Jareth is not super articulated. He's definitely articulated more like you would expect a NECA figure from 5-7 years ago than what you would expect from a modern figure. That's not a deal breaker, though, if that's what you're expecting. The arms and wrists have a great range of motion as does the head. You can really get some great expressive poses from Jareth. 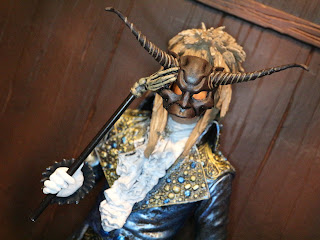 * Jareth includes a couple of cool accessories. First is this cool masquerade mask on a stick! I love it! The paintwork is excellent and the details just ooze coolness. 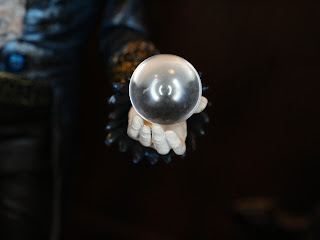 * The second accessory is a simple translucent crystal orb. It fits in Jareth's left hand and is one of those things you probably always think of when you think of Labyrinth. 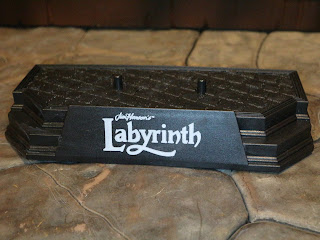 * Jareth also comes with a display stand that features the Labyrinth logo. This is a nice way to keep the figure standing and give it a bit more display presence. 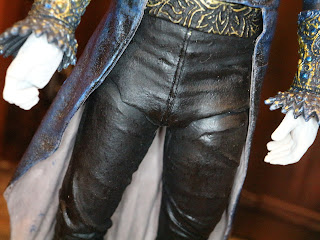 * McFarlane gave Jareth one of those weird waist pieces that some of the Walking Dead and various NECA figures have had. They sometimes look OK but the cut on the right hip (where the leg connects) doesn't seem to be quite right. 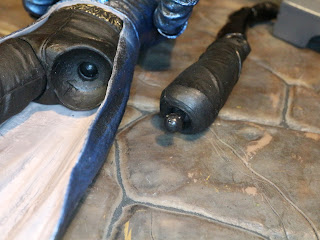 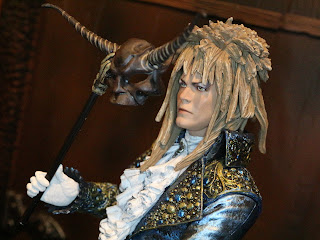 * I like the arm articulation but I do wish it had a bit more range of motion so Jareth could put the masquerade mask right up to his face. 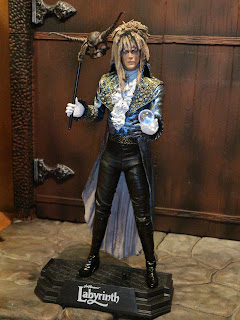 I gotta admit that Jareth is an incredible looking figure with an excellent David Bowie likeness. Considering that he sells for less than $20 bucks, McFarlane has created a very impressive action figure for the price. He's definitely closer to a mini statue than a modern action figure but I'm OK with that. There's something pretty cool about being able to add this figure alongside of my older NECA Jareth and other NECA and McFarlane toys of the past such as Cult Classics and Move Maniacs. I'm hoping that McFarlane continues to explore more unusual licenses like Labyrinth and offer up some cool figures like this that would have been right at home in a series of Movie Maniacs figures. Heck, I'd love to see more Labyrinth figures. Someone needs to make Sarah, Sir Didymus, and Ambrosius! This is a Great and a 1/2 figure and a great addition to a Labyrinth collection!