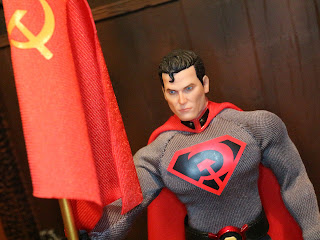 Mezco's One:12 Collective line definitely seemed to have hit the big time in 2017. Around early Spring of 2017 Mezco started rolling out some of the year's biggest hits like Daredevil, Green Arrow, The Punisher, The Joker, and The Flash. From there things just took off and it continues to be a wild ride. While Mezco has had some delays, one of the kind of frustrating/ kind of awesome things that happens in the One:12 Collective line is that a bunch of figures seem to come out around the same time. Superman: Red Son is one of those figures that I received around the same time as a few others. Based on Mark Millar's 2003 Elsweorlds story about Kal-El landing in Ukraine rather than Kansas, this is a very interesting choice for a Superman variant. Red Son Superman is a Previews Exclusive meaning that he is still available through most E-tailers. Let's take a closer look at this communist version of the Man of Steel after the break... 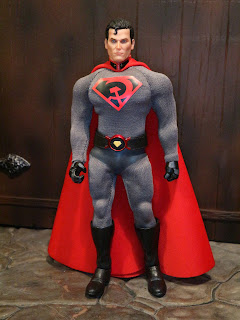 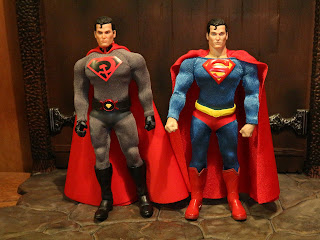 * I haven't reviewed the "classic" Superman yet (don't worry! He's coming soon!) but I did want to show off a quick comparison between the Red Son Superman and that version. Other than the head sculpts (which feature very different paint schemes) and maybe the underlying bodies, these two figures are nothing alike. The boots, bodysuits, and even hands are all completely different. 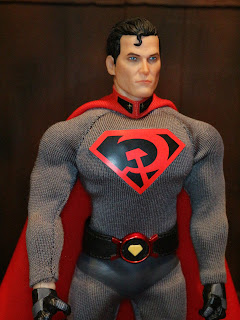 * Red Son Superman is an impressive and rather intimidating looking figure. The red, grey, and black color scheme is awesome and guaranteed to absolutely be different from any other Superman figures in your collection (unless you own the DC Direct Red Son Superman figure). Like with many other One:12 Collective renditions of superheroes, Superman is wearing a form fitting bodysuit. The cape, belt, and trunks are all permanently attached to the figure 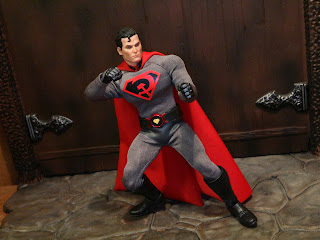 * Superman has nearly all of the articulation you'd expect from a One:12 Collective figure including some improved ankle joints. He's a very fun figure to pose and display in a variety of poses, whether in combat, flying or hovering, or interacting with his accessories. He does seem to be missing the balljointed neck (he has a balljointed head, though) possibly due to his high collar. The quality is excellent and Superman feels as durable as any other collector figure you might purchase. 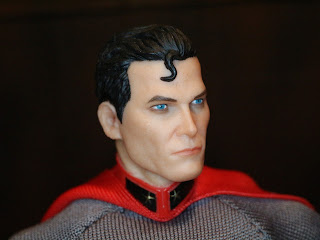 *  I love this headsculpt. While it appears to be exactly the same as the default headsculpt on the standard Superman it just seems to fit this Superman better. It looks much harsher and much more severe than the portrait I'd expect on a classic, heroic Superman. The paintwork is much better here, too. The paintwork is incredible and gives the figure a very lifelike appearance. 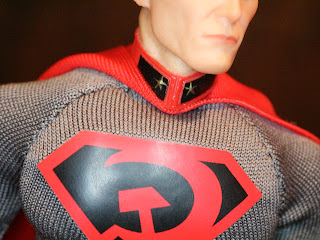 * I really like the High collar that also serves as the anchor point for the cape. It's very dramatic and the presence of two Soviet stars gives it even more dramatic flair. 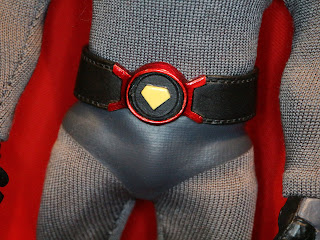 * The belt is quite cool. It is permanently attached to the bodysuit and sits nicely right above the dark grey trunks. 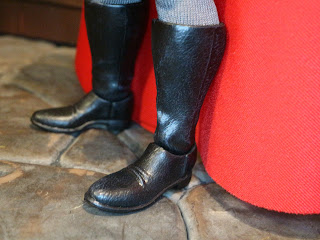 * Red Son Superman's boots are completely different from the standard Superman's boots. They're quite plain, looking like regular old fashioned black leather boots with no laces or buckles. 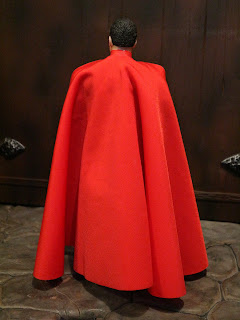 * Superman's cape is excellent. It's of a very high quality and drapes quite realistically over his shoulders. It's a simple red cape but it looks so good with the figure. 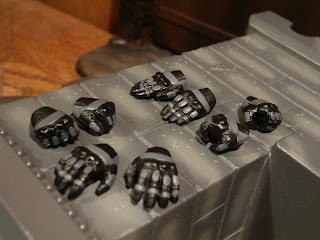 * I like Superman's armored gloves. He includes eight interchangeable hands that swap out easily: A pair of fists, a pair of standard grips, a pair of open palmed grips, and some flat palms for flying poses. 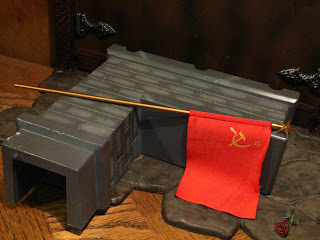 * To show off his commie pride Superman comes with a flag with the hammer and sickle emblem on it. It's a nice quality cloth flag with a gold flag pole and a gold star on top. The figure really does look pretty impressive carrying this. 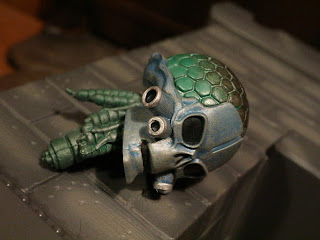 * Another cool accessory included with Red Son Supes is Braniac's head. Brainiac's head is wonderfully sculpted with great paint applications and is ready to be displayed on your shelf next to the head of Mister Atom. Mezco One:12 Collective: Letting you build an collection of severed robotic villain heads since 2017! 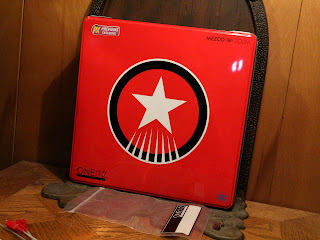 * Like the Fully Loaded Punisher figure and Arsenal, the Previewes exclusive Red Son Superman comes packaged in a metal tin with a hinged lid and also includes the standard ziploc bag. The tin is nice looking, although I do admit that I miss the consistency of the traditionally sized 5-panel boxes. 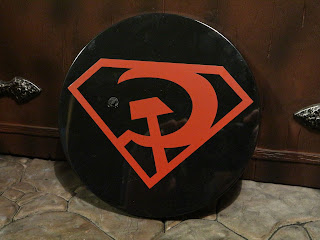 * Like the other One:12 Collective figures, Superman features a round display base featuring a logo. Adorned with the Red Son Superman logo the base features an off-centered peg that helps to keep the figure standing nice and secure. 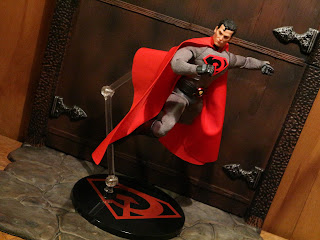 * There is also an articulated display arm that can be inserted where the peg is (you just have to remove the peg). You can get some great, secure poses here as the joints are very nice and tight on the display bar. It can absolutely support the figure's weight if you want to depict Superman hovering above the Earth while lording over it during the Elseworlds tale. 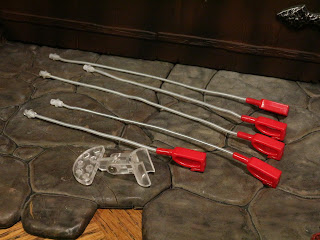 * Also included to attach onto the display stand is a clip that can hold one or all five of these bendable clips. They're intended to be used to pose Superman's cape. I don't have the patience to use them but they're a great extra that add a bit more value to the figure. 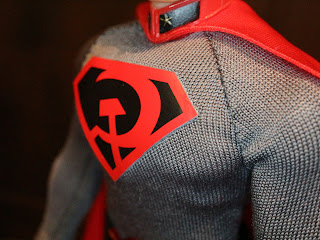 * Superman's chest emblem is an applique of some kind. I like the look of the applique itself but it looks a bit off. I think that due to the scale of the figure the raised edges look a bit more pronounced than they should. Things like this are  bound to happen but I'd love to see Mezco continue to refine this technique. 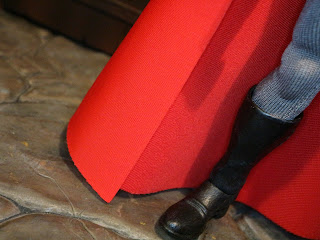 * Unlike some other figures, Superman's cape doesn't have any weights in the bottom (like the DKR Batman figures) nor does it have a posing wire in it. I would have liked to have seen one of those as a little extra to allow for more dynamic poses. 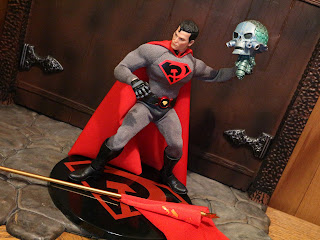 Red Son Superman is a Great and a 1/2 One:12 Collective. While he's kind of billed as a variant of Superman, he's very much a completely different figure despite sharing a headsculpt. I should be reviewing the standard Superman by the end of this week but, for now, I'm leaning towards favoring this version of Superman over the classic. This is a striking figure with some great accessories. Obviously there will be some folks who have never read the comic who will be wondering why the heck you have a communist Superman in your display but, for fans of Elseworlds, this is a real treat.

For more One:12 Collective DC Universe figures, check out the following: