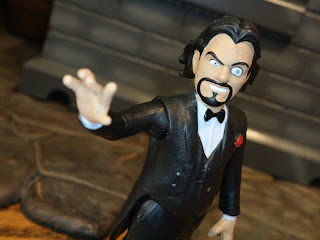 At this point, unless I manage to pick up some stragglers I missed out on from the King Shark series or the Super Friends Superman and Aquaman, this review is probably the last DC Comics Multiverse review from 2017 (I'll review 2017 releases and consider them eligible for my end of the year awards until the end of January). There have been some rumors that the Clayface series is supposed to start arriving at stores today but I consider that very unlikely. While I'll talk more about the year for Mattel's DC Comics Multiverse line as a whole later on, one of the things that strikes me as odd is that at this point I do not own what is clearly the best Collect & Connect figure of the year: King Shark. I grabbed the Bat figures from the series as fast as I could and then never grabbed anyone else. Well, I never found anyone else except the TV Hawkman. I'd love to own him but he's kind of pricey on his own. Maybe shelves will be cleared after the holidays and we'll see more of the King Shark series make their way to mass market retail. Today, though, I'm reviewing Doctor Psycho, the C&C figure from the most recent series of releases. He's a smaller figure and you only need to purchase two figures to build him: Wonder Girl and the misnamed "Dark Knight Returns" Wonder Woman. Let's check out this classic Wonder Woman villain, shall we? More after the break... 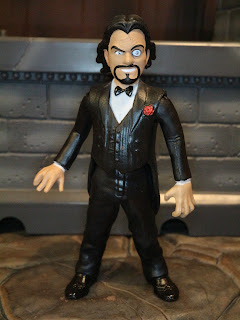 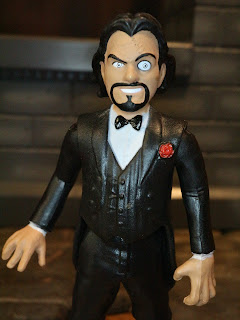 * Like Mister Mxyzptlk from the Super Powers 30th Anniversary series, Doctor Psycho is a smaller figure that should fit right in with your DC Universe Classics figures. Unlike Mister Mxyzptlk, his name is easy to pronounce and he has some articulation on his body. Doctor Psycho is a pretty cool looking figure that comes in five pieces (lower body, torso, two arms, and a head) and assembles easily. He's wearing a snazzy tuxedo with a black bow tie and a red flower on his lapel. 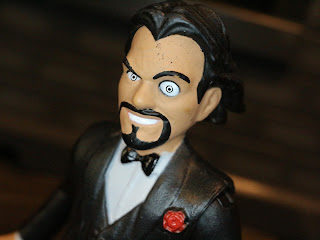 * Doctor Psycho has a great headsculpt. I love his large, open left eye, his cool facial hair, and his devious grin. It's quite nice work that should complement any comic based DC collection. 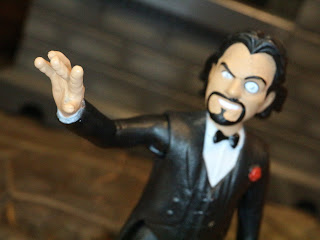 * Doctor Psycho has some wonderfully expressive hands that help to show off his powers. You can really believe he's gesturing at his enemies as part of his mind control methods.
The Negatives: 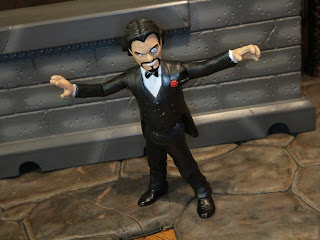 * While he does have a waist, neck, and shoulder joints, Doctor Psycho is definitely under-articulated.  I can understand his lack of hip joints (although, at 3 1/2 inches, there are plenty of Star Wars figures that are this same size and yet far more articulated) but it seems weird that he doesn't have swivel wrists. 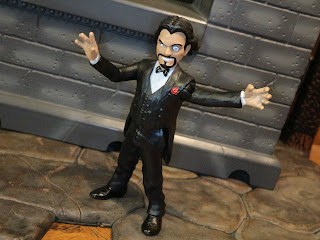 I kind of like Doctor Psycho. He's definitely a character I didn't expect to get in action figure form in any time soon and he's well done in a style that will help him fit in with most of what Mattel has released. He's definitely underarticulated but, considering he's a Collect & Connect figure that only requires parts from two figures, that's not the worst thing in the world. He's actually a Good and a 1/2 figure and a great, surprise addition to the DC Comics Multiverse line. It's nice to add in another Wonder Woman villain as her roster hasn't received too much attention over the years.