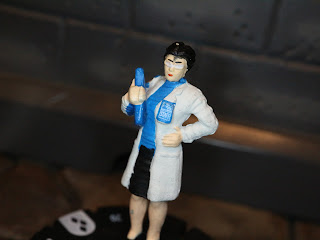 I'm not a HeroClix player but I'm always interested in cool minifigures and while hanging out in my local comic shop on Tuesday night I ended up grabbing a booster pack from the latest HeroClix series: Harley Quinn and the Gotham Girls. Each set has five figures inside and the first one I'm checking out his the completely generic Asylum Doctor. HeroClix, like many other miniature games, adds in these generic "army builder" characters as common figures so that you can create small squads if needed for your scenario. The Asylum Doctor is one of the nameless mental health professionals employed by Arkham Asylum and makes for an interesting choice for an army builder. She's actually a paint variant of the Dr. Harleen Quinzel figure from this same series, so that probably explains why she was made. Let's take a closer look at her after the break... 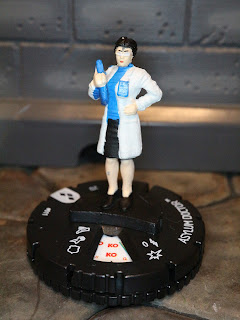 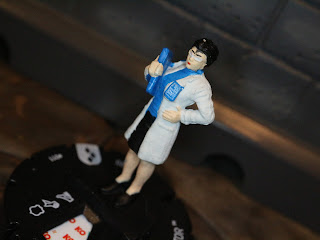 * The Asylum Doctor is wearing a pretty standard outfit of a blue sweater, black skirt, and a white lab coat. She's carrying a blue clipboard and has a blue ID badge on her coat. You can actually see the word "staff" on it in teeny, tiny letters. While the figure looks pretty good at an arms distance, up close you can see a weird paint splotch on her right shin and a speck of errant paint on her hair. 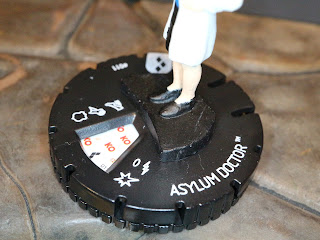 * The HeroClix figures have nice bases that help keep them standing tall and are a functional part of the game (the base spins and the stats in the window change as the game progresses). I just like the bases because they keep the figures from falling over. 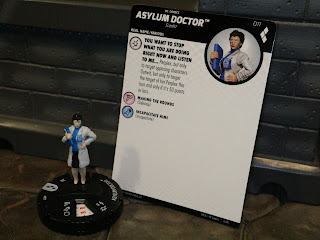 * Each figure includes a card as well. This is more for the gameplay aspect of these as it features the characters powers and abilities. Some of the named characters have interesting facts on them, however, such as their real names and a significant or first comic appearance. The Asylum Doctor just has "various" listed for real name, though. 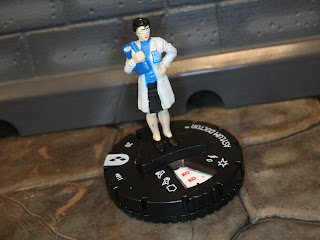 As a Batman/ DC fan I'm definitely surprised by this figure as it seems like an interesting novelty. It's not the most exciting minifigure but there is something cool about it. The pose is pretty neutral and there isn't anything unique or fascinating on the base like some other HeroClix figures have. She's a Good minifigure but not one you'll probably want to hunt down over other figures in the set. These lines have too many super rare and chase figures for me to invest too much time or money in collecting but a booster or two makes for a fun purchase.

I've only reviewed a few other HeroClix figures: