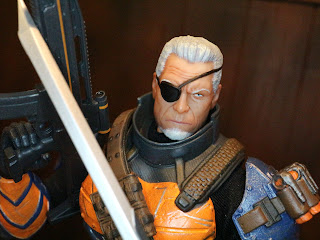 Today's review of the Mezco One:12 Collective Deathstroke is the last 2017 action figure review I'll be doing before I release my annual Top 10 awards. It's probably no secret that Mezco's One:12 Collective will be appearing on my list this year as it has been a great year for them. While Mezco has had a number of product delays, they've also released a ton of product. For a line with figures running around $80 dollars a pop Mezco has released more than enough action figures to satisfy all but the most compulsive collectors. I think if they communicated their release schedule changes a little but more the delays wouldn't seem problematic at all. At the end of the year Mezco released a ton of product for the line and Deathstroke was the last 2017 figure to be released. A number of e-tailers seemed to initially get smaller shipments than expected causing Deathstroke's price to store. After a few weeks my pre-order from Big Bad Toy Store came in (which has been made back in 2016!) and Deathstroke showed up to my house this past Wednesday. Deathstroke always seems to translate well into action figure form and Mezco's take on Slade Wilson is another exceptional toy of the character. Let's take a closer look at this awesome 1/12th scale Deathstroke after the break... 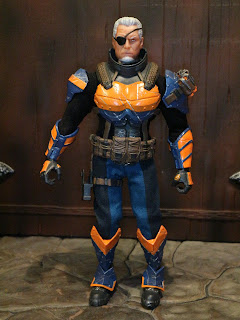 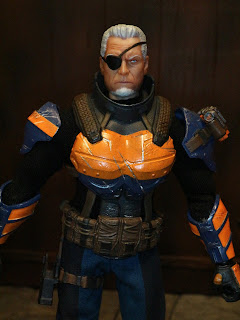 * Deathstroke, like most of the other non-movie based DC and Marvel figures, is a Mezco design based on a number of the character's appearances in various forms of media. Mezco did a great job of balancing the comic book-ish style of Slade's earlier appearances with his modern, tactical armored looks from Arrow and the Arkham video games. Underneath all of that segmented armor is a simple black, form fitting shirt. It looks great while still preserving the character's mobility. The chest piece is also a separate piece from the stomach armor and belt, helping to further give the figure a more complex and layered feel. 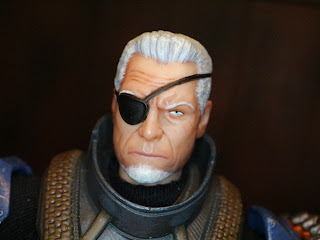 * Mezco has created an incredible headsculpt for Slade Wilson for this release. Sometimes Slade is portrayed as having prematurely grey hair but here Mezco went with the aged look. Slade is absolutely the grizzled old man who has seen it all and done it all and thanks to the character in the sculpt you can tell that just by looking at him. I see a little Ron Perlman in this sculpt, too, don't you? The paintwork and the lines on his face are absolutely incredible. 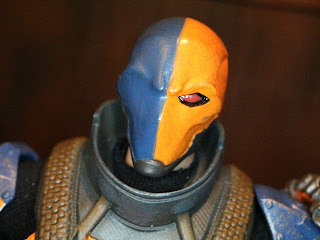 * Slade also comes with a masked portrait wearing his well known blue and orange mask. While you can see some armored aspects to the mask you can also see elements of it that seem to be form fitting, particularly around his brow. The paintwork is excellent here and looks neat and clean while still conveying a weathered, somewhat gritty appearance that stylistically matches a number of other Mezco figures. 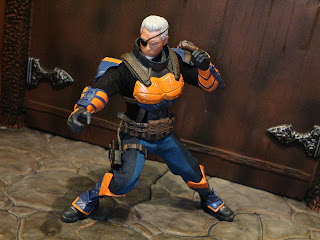 * Slade's articulation is excellent. He moves as well as any other Mezco figure and the construction of his armor inhibits things quite minimally thanks to their segmented construction. His ankles have a far better range of motion than many of the other figures in the line and even the armored pieces on his boots are articulated to allow Deathstroke to take deeper and wider stances. 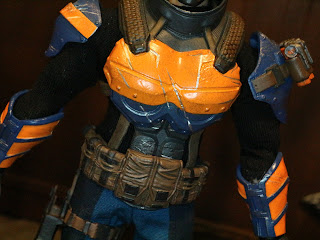 * Deathstroke's armor is great, striking the perfect combination the bold and colorful classic looking outfit and a modern, tactical aesthetic. The chest plate is a separate piece from the ab armor so it can move realistically. The various pouches on Deathstroke's belt look incredible as well. I'm especially keen on the weathering and the scratches in the armor. This is incredible sculpting and paintwork! 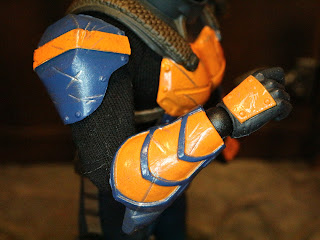 * While there is still an over-the-top comic book inspired aesthetic here, Deathstroke's shoulder and forearm armor still seems like it could be functional in real life due to how it attaches to the figure. These individual pieces seem like they would allow for mobility and are smartly designed. 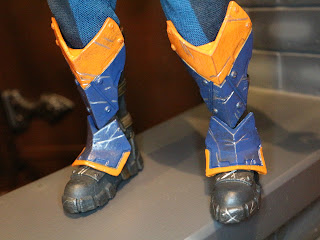 * Here's a shot of the boots and shin armor. The flares on the shin armor are separate from the armored panels on the boots, which are articulated. This seems functional and just looks incredible. Again, the paintwork here blows nearly anything else in this scale out of the water. 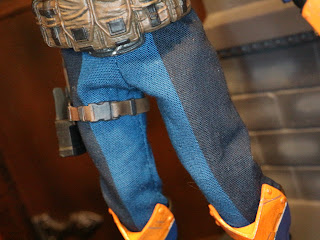 * While his shirt is made from a stretchy material, Slade's pants are made from a more normal material. These seem like the standard pants you might see on a military or police uniform which works perfectly for the design. I really like that they're a combination of blue and black as it adds more color to the figure. 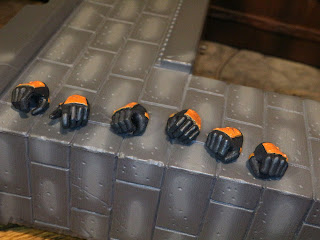 * Slade comes with 6 interchangeable hands: A right handed pistol grip, a left handed cradling hand, a pair of standard grips, and a pair of fists. I do wish he had pistol grips for both hands but I was able to use the left hand designed for cradling the rifle as a grip for firing Slade's rifle. Everything swapped out easily and the gripping figures have a nice amount of give to them, making swapping accessories a stress free experience. 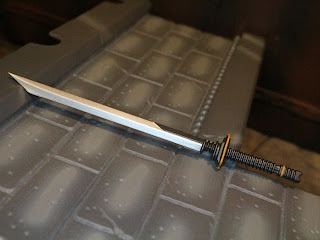 * Deathstroke's sword is awesome. I love the design of this weapon. It's just so sleek and professional looking with a truly sharp point. The paintwork is incredible as well. 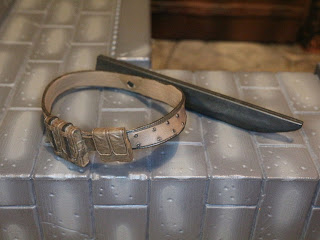 * To carry his sword around Slade has a sheathe attached to a shoulder strap. This strap very easily fits across Slade's chest (there's a sturdy peg hidden underneath one of the pouches) and it looks awesome on the figure. The pouches have some excellent paint applications and the presence of the strap completes the look of Deathstroke's outfit. Oh, and the sword fits in the sheathe just fine too. 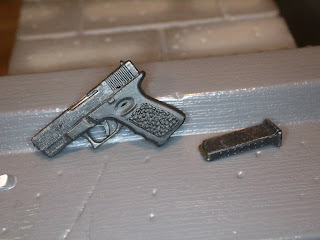 * Deathstroke comes packing a pistol with a removable magazine. I love the sculpting on this, particularly the detail work on the grip. The slide isn't functional like on the Punsher's pistol but the barrel does have a hole so you can use the bullet effect with it. 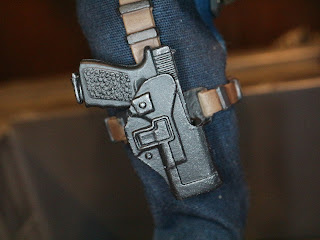 * Slade has a tactical holster on his right hip. It stay in place nicely and the pistol fits in securely. No loop or little pegs needed to keep this guy in place. 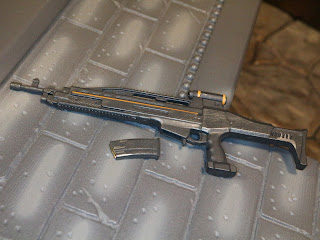 * Deathstroke's rifle looks to be a customized version of the H&K XM8 assault rifle. It's a great rifle and features a removable magazine that fits nicely into the rifle. The paintjob is really slick on this and Slade looks great wielding it. 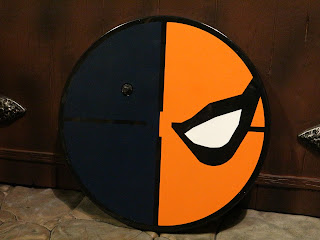 *  Like the other One:12 Collective figures, Deathstroke features a round display base featuring his logo emblazoned on the base and an off-centered peg helps to keep the figure nice and secure when standing up. 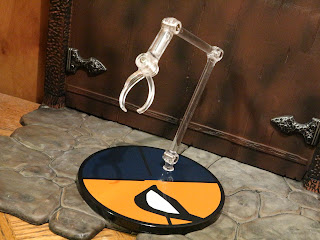 * There is also an articulated display arm that can be inserted where the peg is (you just have to remove the peg). You can get some great, secure poses here as the joints are very nice and tight on the display bar. It can absolutely support the figure's weight if you want to depict Slade mid-air while engaged in combat. 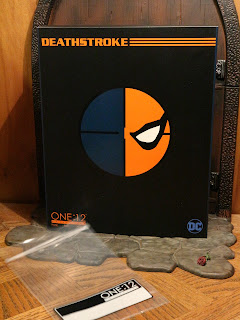 *  Mezco makes these figures very easy to store. For longer term storage, it's nice to know that the gorgeous boxes these figures come packaged in are completely collector friendly. Second, to keep the extra headsculpts and hands close by when not in use, Mezco also gives you a cool branded bag. It's just a simple plastic bag with a Ziploc styled closure, but it's appreciated. Deathstroke has the newer styled window box with a removable slip cover. I don't like these as much as the older five panel boxes, but it still looks nice and works the same way. 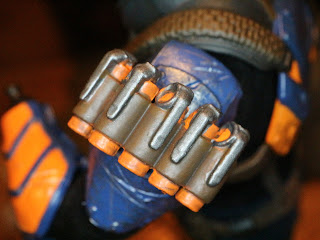 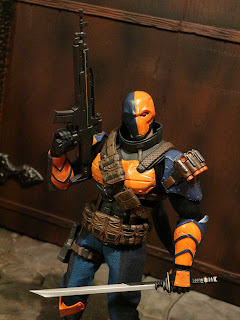 * Deathstroke is a great figure and I'm pretty happy with him but I do wish he came with a staff. A bo staff is pretty much one of Deathstroke's signature weapons and nearly every action figure version of the character tends to come with one. Mezco could have done some cool stuff with it as Deathstroke often carried some nasty hardware inside of his staff. 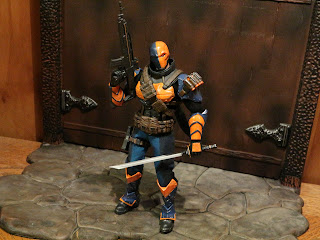 Deathstroke is without a doubt one of my favorite One:12 Collective figures released this year in both the Marvel and DC collections. He's absolutely incredible and definitely Epic. While I do wish he'd included a few more pieces of weaponry, especially his staff, there's nothing at all to complain about with what we got. His costume, sculpt, paintwork, accessories, and soft goods are all spot on. If Mezco continues to offer figures as good as Deathstroke next year then 2018 should be another solid year for the company.

If you're looking for more One:12 Collective DC Universe figures, check out the following: