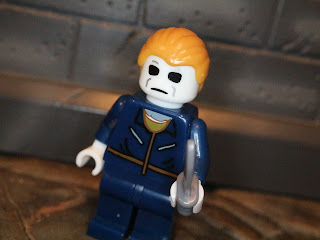 On Saturday I attended a small, local comic book convention (the Shelby Comic Con in Shelby, NC) and picked up some pretty cool stuff. One of the items I grabbed was this Lego styled Michael Myers. Over the past few years pretty much every convention I've been to has had at least one dealer selling Lego/ Lego styled minifigures. While some of the figures seem to be regular Lego releases, others are more unique and offer custom characters Lego has not offered. Looking online, I've seen lots of listings for this figure by a company or distributor called Kopf so I have no idea if this is a bootleg, a custom, or just a Lego styled figure. I'm not much of a Lego collector these days so I'm not an expert on the subject. I'm definitely a Halloween fan, though, and the lure of a little Lego styled Michael Myers for $4 bucks was too much. Let's check out this spooky little guy after the break... 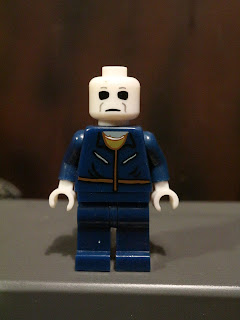 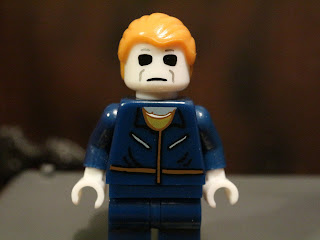 * Overall Michael Myers is a pretty plain looking minifigure, but that's kind of his deal, right? While he's large and intimidating he also is pretty nondescript: Just an expressionless white mask and some coveralls. Michael's coveralls are blue here, although in reality they were actually "spruce green." Like Han Solo's parka, this is one of those areas where the movie's lighting changed the color of the outfit. On screen 95% of the time they look blue, so here they are! 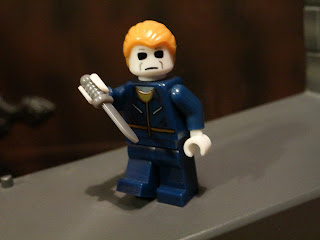 * Michael Myers is built like a standard Lego minifigure so he has all of the basic joints you would expect. It's a fun, consistent design and means he'll fit in well with your other Lego minifigures. He doesn't feel at all cheap or unlike a Lego, so that's a plus. All of his parts are removable, just like a standard Lego. Kind of weird that he has white hands but eh, whatever. 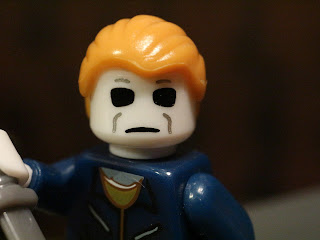 * Michael's mask looks excellent. It's nicely stylized but still has that creepy, haunting, shapeless look to it. I love the all black eyes and the lines that give the face some subtle definition. 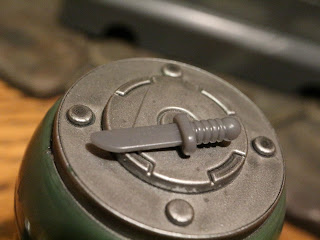 * Michael includes a knife. This is a pretty standard Lego minifigure accessory and it works great with the character. He holds it well and it makes him all the more menacing. 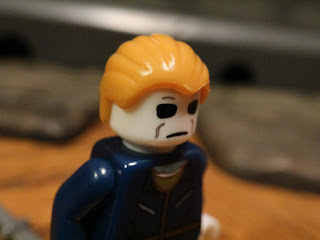 *I like the piece used for Michael Myers' hair here but it looks a little too orange. It needs to be a bit more tan. 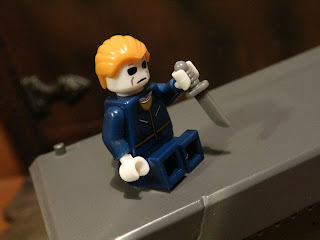 I like this little guy. For $4 bucks, about the price of a standard Lego minifigure, he's easily worth it. I actually have the Lego haunted house from the Monster Fighters range that was released in 2012 and this guy will look awesome standing outside of it. He's a Good and a 1/2 little minifigure. I'm a sucker for Michael Myers toys and this is an interesting one to pick up if you're a fan of the film series.

If you know anything more about the maker of this minifigure, please comment below and let me know!