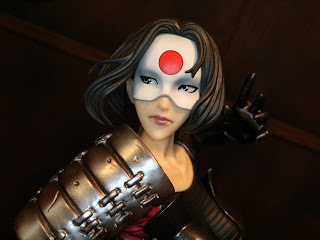 Just before the end of the 2017 Kotobukiya released another entry in their long running DC Comics Bishoujo line: Katana! It's almost been a year since their last release, Wonder Girl, so I was really looking forward to this one. Not only do I love Katana but I just love this line in general. Each release is consistently of a very high quality and the more of these statues you add to your display, the better they look. Katana has exploded in popularity over the past couple of years thanks to her increased presence in the comics, her role in Suicide Squad, and being part of the DC Super Hero Girls. Let's check out this cool modern statue of Katana after the break... 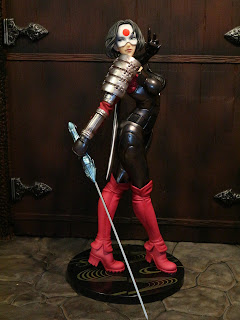 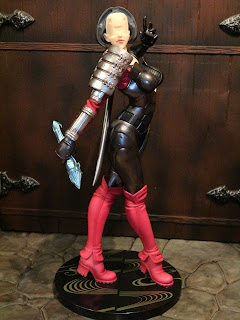 
* Here's a look at the statue with the faceplates, hair, and sword blade removed. The blade for Soultaker comes separate in the package so that it doesn't get broken in shipping while the front of Katana's hair comes off to allow either of the two faceplates to be switched out. 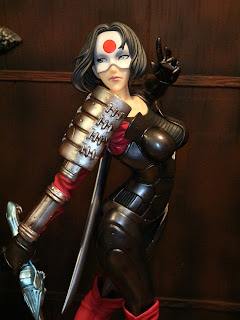 * Katana is an exceptional looking statue. I've said it for nearly every release but I really think plastic statues look better than pretty much anything else, no matter the material or the price. They manage the crispest, cleanest details with some of the best paintwork in the business. I own 22 Kotobukiya statues and I've never had one with a defect or a blemish. That's some quality work and Katana continues that excellent tradition. This is a great rendition of Tatsu Yamashiro in an outfit that captures elements of her New 52 and Rebirth appearances into one fantastic look. 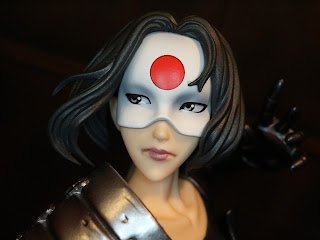 * The headsculpt is excellent with fine strands of hair, excellent work on the paint, and fantastically expressive eyes. 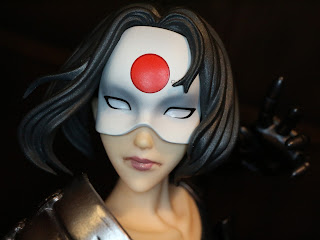 * The second faceplate gives Katana the fully white eyes that are most often seen in her comic appearances. I think I like the standard eyes the best but both faceplates are really good. 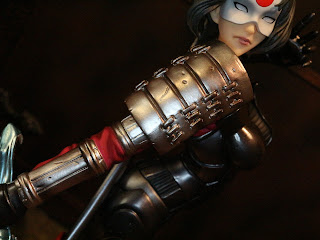 * Katana's right arm is covered with a red sleeve, an armored pauldron, and an armored bracer. The paintwork and sculpting is excellent. I really like the various scrapes, dings, and nicks in the armor. They're simple but impressive. 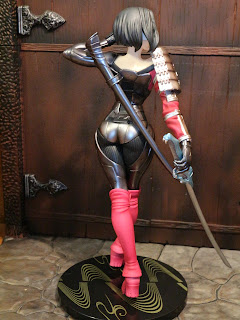 * From the rear you can see how Kotobukiya really added a lot of motion to the sculpt. It makes Katana look like she's actually walking! The sculpt of her hips and legs is fantastic. The posing of her sword, Soultaker, is excellent, too. It's posed out an an angle from the body with the blade facing downward. The blade is a separate piece in the package that you simply slide into the hilt. 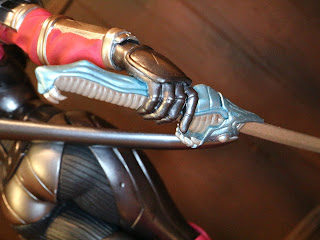 * Solutaker's hilt is quite impressive. Due to the elaborate design it appears to be a very large hilt (maybe a bit too large) but I think that is just part of the style of the statue. 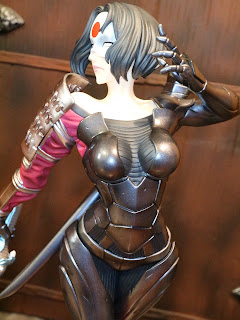 * Katana's armored bodysuit looks like it is composed of multiple armored plates and the definition on these is excellent. The finish on the plastic (matte versus shiny) and the differing colors truly gives off the impression that Katana's outfit is made from different materials and multiple pieces of armor. 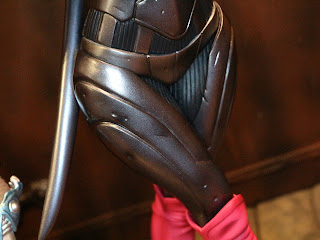 * The hip armor looks excellent as well. You can see what appears to be a flexible bodysuit underneath along with more dents and damage. 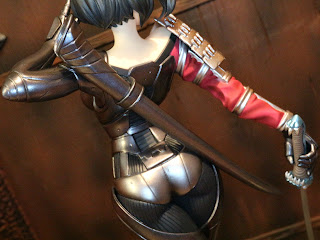 * While it is not functional, Katana is carrying a sheathe for Soultaker on her back. 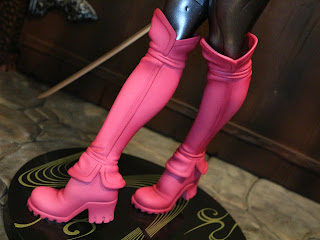 * Katana's boots look incredible. Not only are they excellently sculpted but they also have a nice shadow effect that makes them look much more elaborate. The paintwork on these statues is always perfect. 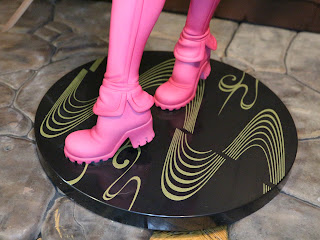 * Kotobukiya seems to have abandoned the more elaborate bases of the past, but that doesn't mean that Katana's base is just a flat black circle. The base has various gold lines on that give it a little extra pop. 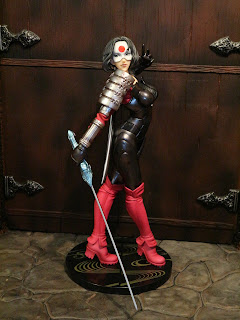 Katana is another excellent statue in Kotobukiya's DC Comics Bishoujo line. This is one of my favorite lines and I'm always glad to add another piece to it. Kotobukiya has really been slowing down in the DC line and I'm hoping they keep things going. They've announced the Supergirl Returns statue but it'd be nice to see a few more new characters announced such as Mera, Hawkgirl, Killer Frost, Cheetah, and maybe even Green Lantern Jessica Cruz. Oh, and a new Catwoman as that's the only character in this series I don't own and the price has soared on it! Katana herself is an Epic statue and well worth picking up. The sculpt, paintwork, and overall quality is just perfect.

For more DC Comics Bishoujo statues, check out the following: