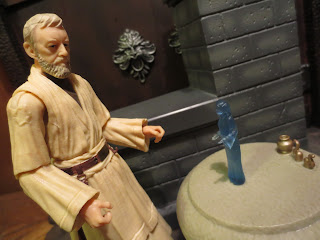 On the Road to Rogue One I'm not just covering figures from Rogue One; I'm covering figures from across the Star Wars universe! Today I'm looking at the SDCC 2016 exclusive Obi-Wan Kenobi from Hasbro. While this figure will be released in a future series, this version comes in a really nice five panel window box with an incredible cool accessory: Obi-Wan's table with a light-up "holographic" Princess Leia. It's a fun, unique accessory and is one of those exclusive accessories that was too cool for me to pass up. I initially gave up hope of acquiring this piece but, sometime over the past week or two, Hasbro put these back up for sale on Hasbro Toy Shop. I managed to snag one thanks to a notification from Jedi Temple Archives and now I'm reviewing him today. Ready for a closer look at Obi-Wan Kenobi? Then join me after the break... 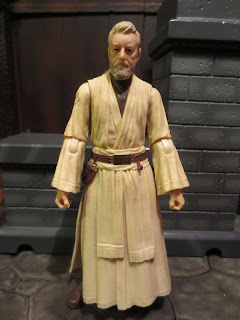 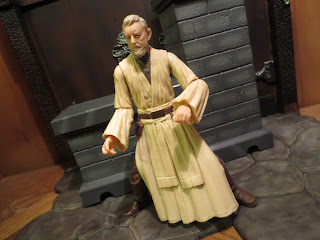 * While he has a plastic lower robe, it doesn't effect Obi-Wan's articulation too much. He's a pretty spry figure and has all of the joints you'd expect on a Black Series figure. He absolutely can hold his saber with both hands for some excellent and classic poses. 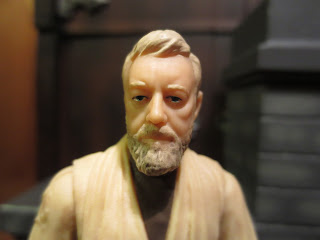 * I'm not sure if it's coming through as well in the pictures as it comes through in person but this is an exceptional head sculpt. Hasbro really captured the likeness of Sir Alec Guinness as Obi-Wan Kenobi. The hair, beard, and eyes are just perfect. There's not as much life in the sculpt as I would have liked but it still looks incredible. It might actually be one of the best headsculpts we've seen in this line. 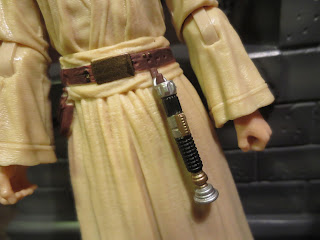 * Obi-Wan's belt not only has a pouch and a belt buckle, but there's also a hook to hold his trusty lightsaber.

* This set comes with two lightsabers: Kenobi's own lightsaber and Anakin Skywalker's lightsaber which he gives to Luke. We've seen the Skywalker lightsaber many times before but the Kenobi sculpt is new and very, very nice. It appropriately differs from the lightsaber that came with the Revenge of the Sith Kenobi and it looks great. The Obi-Wan figure that will be released later this year comes with his own saber but not the Skywalker saber. Of course, you probably have a few of those hanging around already, right? 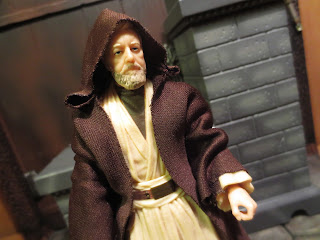 * Finally! A Jedi knight actually comes with a Jedi robe! Anakin Skywalker and the ROTS Obi-Wan didn't come with these and they felt sorely lacking. This could not have been skipped on this figure, though, and fortunately it looks amazing. This really ties the figure together perfectly and really captures the feel of the character. 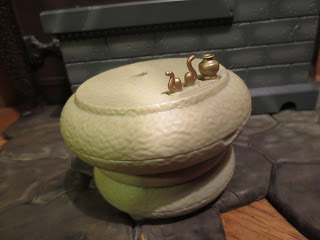 * Here is Obi-Wan's Kenobi table. It's a really cool piece that has some little sculpted accoutrements (a decanter and a few other items) and just looks awesome when creating a diorama on your shelf. But the best is yet to come... 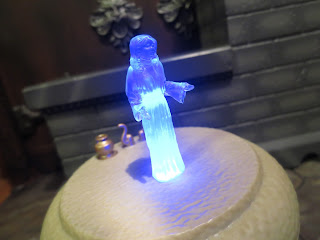 * Plug in the little holographic Princess Leia and push down on one of the bronze items on the table and you will actually hear either the famous "Help me Obi-Wan Kenobi. You're my only hope!" or the entire message to General Kenobi (it alternates). It's a really cool feature and looks incredible! I love how Leia lights up and flickers. This is definitely one of the coolest features I've seen on an action figure lately. 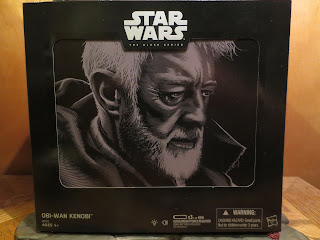 * Hasbro does some nice work on their convention packaging and Obi-Wan's box is another nice effort. It's actually black and silver (rather than black and red) and has a really nice image of General Kenobi right on the front. 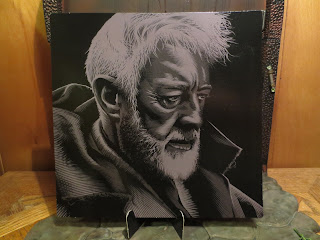 * The image on the front of the box is removable (it slides out from the top) and reversible (the other side features a transcript of Princess Leia's message to Obi-Wan). It also comes with a little cardboard stand if you want to put it on display. There is actually a little cardboard tray that pulls out from the side of the box which holds the stand. It's nice that Hasbro gave a few different display options for packaging this nice. 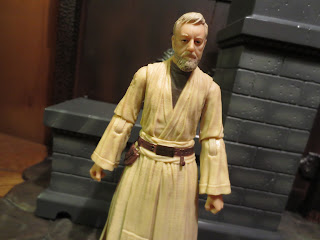 
* Obi-Wan's interior robes aren't bad but they just seem like they could use a bit more paintwork to help them stand out. They're a bit plain, really. 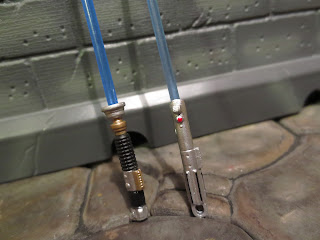 * These lightsabers look incredible but I'm really starting to dislike the removable blades. They're either too tight or feel like they could be too loose. They also feel really fragile. I'd love to see Hasbro just go towards giving us a solid saber and a solid hilt in the future rather than focus on the removable blades. 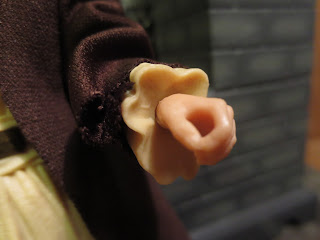 * The sleeves of Obi-Wan's tunic really could have used a little something to make them look a bit less silly. Maybe a darker paint app on the interior sleeve or a more hollowed out sculpt? 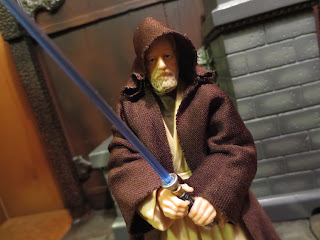 While I have a few small complaints with this figure, overall it's a really impressive release. I'm glad that this guy is getting released at general retail, though, because it'd be pretty cruddy to release one of the main characters from ANH as an exclusive. The loss of the table for most fans is probably a pretty big loss, but it seems like these have been a bit easier to find than previous years' exclusives. He's a Great and a 1/2 figure and well worth tracking down. The table is just too cool to pass up.