31 Days of Toy Terror Lives: Karnak from Monster in My Pocket by Matchbox 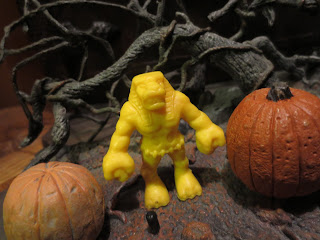 Today on 31 Days of Toy Terror Lives I'm back with another spine-chilling review from Matchbox's Monster in My Pocket line! Today I'm looking at one of the series one monsters; an ancient Egyptian menace named Karnak! Karnak is supposed to be an ancient Egyptian pharaoh who haunts the dreams of his victims like a mummified Freddy Krueger. Named after the Karnak Temple Complex of Thebes, Karnak is, as best as I can tell, a monster made up by Matchbox. While he may not be that great at being able to divine the answers to questions sealed in envelopes, he apparently can create dust storms and control the minds of his enemies by using the skulls he carries in his hands. Crazy, right? Let's take a closer look at Karnak after the break... 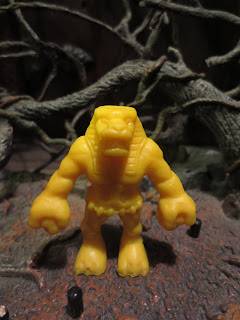 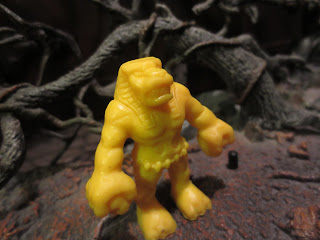 * Karnak is a pretty simple monster: He's standing up straight, has a mouthful of sharp teeth, and is wearing a nemes on his head. If you look in his hands Karnak is wielding the two skulls mentioned in his bio. The detail is really soft so you can barely make out the eye sockets and teeth on them. 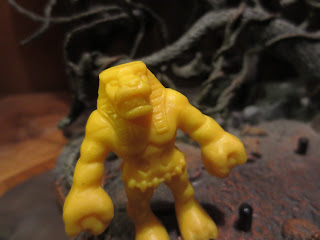 Karnak's not a terrible minifigure but he's definitely not as exciting as many of the monsters that came out. I don't dislike the standard pose (he'd fit in fairly well with M.U.S.C.L.E. figures) but there definitely is something not as dramatic about it. I like his head sculpt but I wish the skulls in his hands were a bit more prominent; maybe if he were holding them out on the tops of his palms? He's a Good Monster in My Pocket but not one of my favorites. Still, it's hard to be too disappointed with a 1 3/4 inch little rubber figure.

Keep checking back here every day in October for more Toy Terror! Also, make sure to check out the Toy Bloggers United contest being hosted here this month! For more 31 Days of Toy Terror, check out my Hokey Halloween Horror page for spooky fun from 2016 and years past!
Posted by Barbecue17 at 10/11/2016