Road to Rogue One: K-2SO from Star Wars: The Black Series Phase III by Hasbro 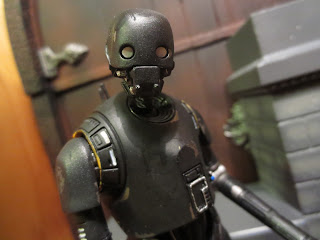 Today it's another stop on the Road to Rogue One! This time we're looking at the new starring droid, K-2SO. An Imperial Enforcer Droid that has been modified to aid the Rebellion, K-2SO is a tall, lanky creation that will remind you of a variety of other droids from Star Wars' past while still offering something different. Voiced and motion captured by Alan Tudyk, K-2SO is quite different from last year's breakout star of The Force Awakens, BB-8! Since we don't know that much about K-2SO, let's jump right in and review the figure, shall we? 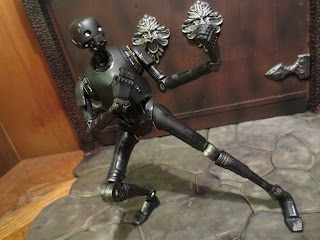 * K-2SO is built quite differently from most other Star Wars: The Black Series figures. He's very well done, though, and has a very impressive range of motion. He's double jointed in many place and, with some time and a devious mind, you can contort him into a variety of frightening poses. The ball jointed neck and head are incredibly expressive, too. Playing with this guy really makes me want a Battle Droid in the Black Series! 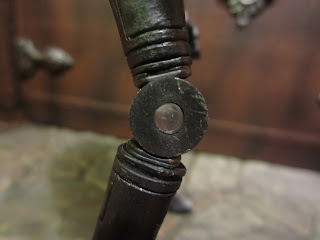 * Don't panic! I no collectors tend to flip out over clear plastic because it tends to be brittle. The clear plastic here, though, doesn't seem to be part of he actual moving joint; more like a clear peg that helps keep the joint together. It helps preserve the look of the figure while actually adding some integrity to what could have been very fragile joints. It's a solid solution to the problem of translating a CGI character into a toy and seems to have little potential for problems. 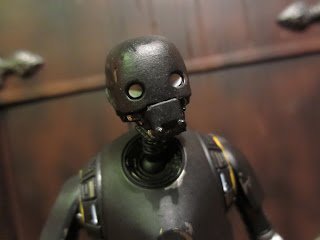 * The most fascinating thing about K-2SO might be his head: It looks rather vacant and expressionless and seems like it could fit along with whatever kind of emotion you felt when looking at it. If this guy were helpful and watching over you, he seems like he could be charming, kind of like Baymax. If this guy were assaulting you at the orders of the Empire, there's be something deeply disturbing about his expressionless face. I imagine an inhabitant of the galaxy would probably project their feelings about the Empire on an Enforcer Droid like this. 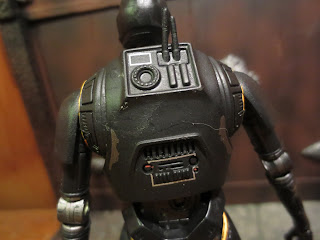 * K-2SO has some really impressive sculpting and his back really shows it off. Check out all of the various tech boards and panels back there. The upper panel with two small antennae really reminds me of something we would have seen on the back of a Battle Droid or a Commando Droid. The paint work is nice on both the various buttons and panels and on the weathering which covers the droid's body. 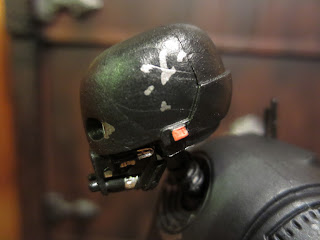 * Here's a look at the side of K-2SO's head so you can see more of the weathering look. I'm so pumped to see this guy in action in under 3 months, aren't you? 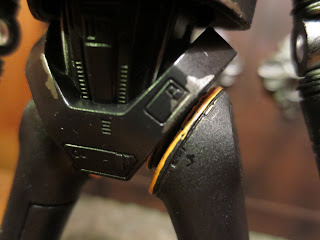 * I really like the orange stripes around the edges of K-2SO's hips and shoulders. At first I thought they looked a little messy but, after examining some film stills, I think they match the look of the droid nicely. The orange lines do seem to have a rough edge to them on the droid, so these seem really accurate. Is that accuracy intentional? Only Hasbro knows and they're not telling! 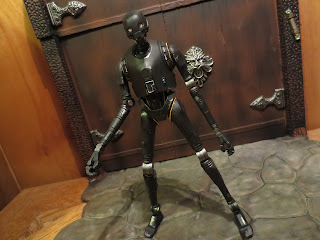 * I love the overall look of this guy. He's got long, spindly arms and legs and just looks like he could be a fierce presence if need be. He seems to capture the look and feel of the film character well, particularly the height, and that's a big plus in my book. 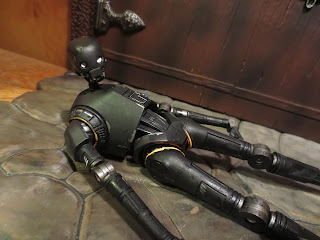 * I'm not really holding this against the figure but do be careful when standing this guy up on display. His somewhat gangling build seems as if it might cause the droid to tip over from time to time. No one wants their droid to shelf dive, do they? 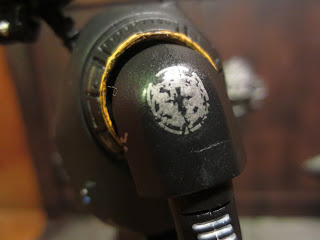 * Ready for a Rorschach test? What's this logo on K-2SO's shoulder? Is it a silver medal? A pizza slicer? A coin? Wait, is that the Imperial Cog logo? Yes. Well, that's what it's supposed to be anyways. I got a bizarre quality control error where it looks like the stamp just didn't come down right. Crap. (By the way, I checked and this doesn't seem intentional.) 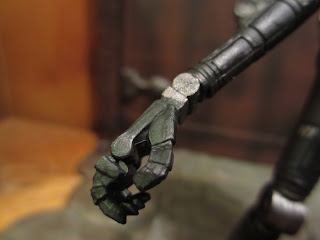 * K-2SO looks ready to grip a blaster but he doesn't come with any firearms. That's a bit disappointing, especially since most of the sales images released for preorders (and still used by retailers like Target) show an E-11 in the package with K-2SO. 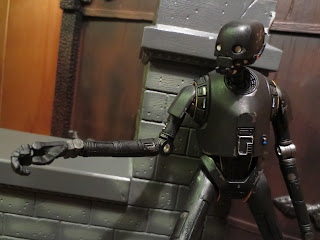 I'm really quite happy with this first group of Rogue One figures from the Black Series, and K-2SO is another hit. He's a Great and a 1/2 droid that really adds something unique to your Star Wars: The Black Series display. Whether you want to have him be an aide to the Rebellion or would rather use him as an Imperial army builder, this guy is quite fun and will certainly standout. I hope he's a cool character in the film, as he certainly already seems to have the look down.


I haven't reviewed any other figures of K-2SO but I have reviewed plenty of other Star Wars: The Black Figures, including: