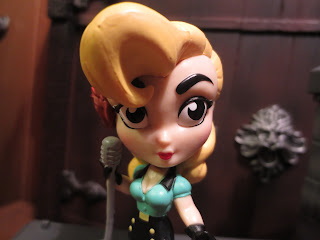 Today I'm looking at my fourth purchase from Cryptozoic's DC Comics Lil Bombshells line: Black Canary. I actually just started reading the comic series inspired by these statues lately and I'm really liking it. Being only a few issues in it's kind of an alternative history version of World War II where a team of the most powerful women in the DC Universe are brought together. Bombshells seems to have been a real hit for DC as the statue line is continuing on with new characters, they've created an ongoing comic series, and we're seeing some heavy merchandising. I'm glad that DC is giving fans who can't afford that many statues a chance to pick up some of these characters in smaller, less expensive scales, such as these 3 inch figures. Let's take a closer at the Black Canary, shall we? 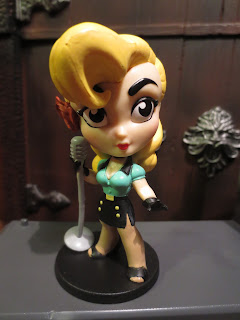 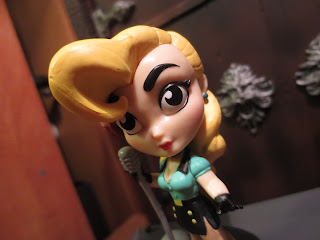 * When I first saw the Black Canary Bombshells statue, I was really impressed. I liked the interpretation of Black Canary as a nightclub singer and Ant Lucia's art really captured a very glamorous side of Dinah. That glamorous look has translated well to the smaller and more stylized Lil Bombshells as Dinah still looks pretty smashing. As seems to be a strength of this line, the paint is quite impressive, too. 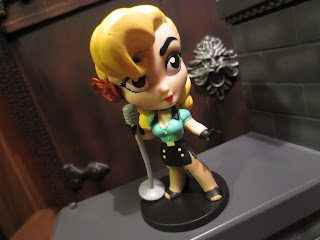 * The weakness of this design, and thus this figure, is that there really isn't anything here that screams Black Canary (pun intended). Other than the microphone serving as a link to her Canary Cry power, she really does just look like a figure of a performer. I think Cryptozoic tried to capture her fishnet leggings with a darker paintjob on the legs but it looks kind of awkward. 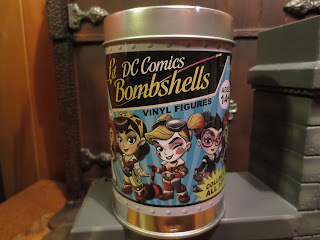 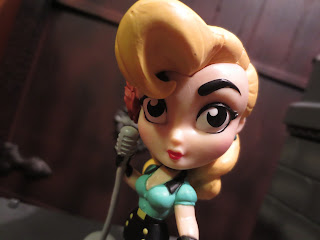 I love Black Canary and while I like this figure, it's definitely the figure in the line that feels like it least meshes the comic character's defining features with their aesthetic. Show just this figure to someone and I doubt they'll connect the dots that it's supposed to be Black Canary. Still, it's nice looking and when you put Ms. Lance alongside everyone else in the series, you'll probably be much happier. She's a Good figure but not one of the highlights in the set.


If you're looking for more Black Canary, I did review Kotobukiya's Bishoujo Black Canary earlier this year.
Posted by Barbecue17 at 10/08/2016