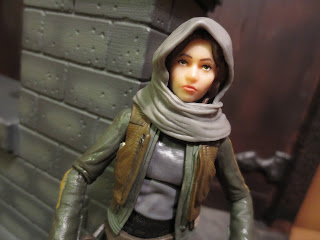 If you can't already tell by me doing a "Road to Rogue One" special review series that will last until the film's release, I'm really, really excited for Rogue One: A Star Wars Story. Sergeant Jyn Erso definitely is being marketed as the main hero for this film and I'm already crazy about her. Played by Felicity Jones, Jyn Erso already seems to be the smuggler/criminal/rebel/ type of hero that I've always decided I would be in the Star Wars universe if I couldn't be a Jedi or Han Solo. Hasbro seems to be very consciously releasing tons of Jyn Erso merchandise this year due to last year's #Where'sRey controversy and in the 6 inch series alone there are already 4 opportunities to pick her up: The SDCC exclusive version of this figure, A K-Mart exclusive deluxe figure, a Target exclusive 3-pack, and the single figure I'm looking at here. Let's take a close look at one of the newest major players in the Star Wars Universe, shall we? Join me after the break... 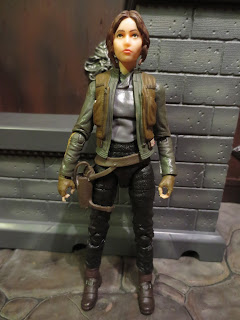 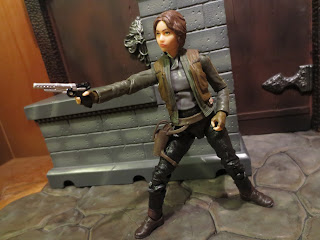 * Jyn Erso has excellent articulation. Hasbro has really been doing a great job at keeping a consistent and useful articulation model going with the Black Series figures, despite nearly every figure being a unique sculpt, and Jyn can do anything you need her to. She's probably tied with the Death Trooper as the figure from the new series that I've spent the most time posing. 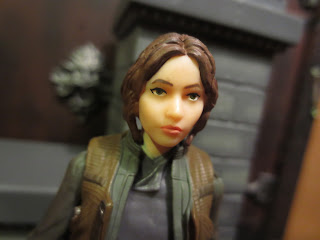 * I've seen some pretty unenthusiastic reactions to this headsculpt but I think it's pretty good. It fits in with the aesthetic Hasbro has went with in this line that's not quite lifelike realism, but not caricatured either. I think it looks quite a bit like Felicity Jones. The hair is also really well done; it even has a light wash to it to bring out some more detail. 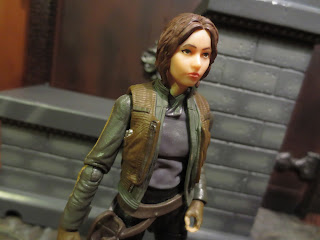 * I love the look of Sergeant Erso's outfit. It's plain Star Wars classic cool: The jacket, the boots, and the vest all go together so well. This is an incredible look and I'm sure it's going to be a popular cosplay next year. Heck, I'm a guy and I'd wear this outfit every single day if I could. It's just that slick. (I'd wear a Lando Calrissian styled cape every day if it were socially acceptable, too!) 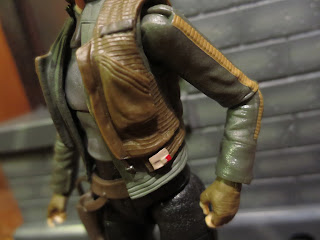 * A closer look at Jyn's jacket and vest shows some really nice texturing on the outfit. There's also some cool little extras such as code cylinders in the pockets on the vest and some sort of clasp or device at the bottom of it. 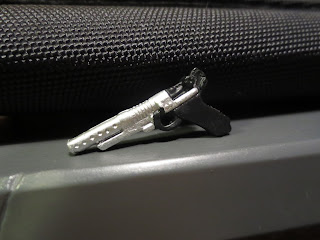 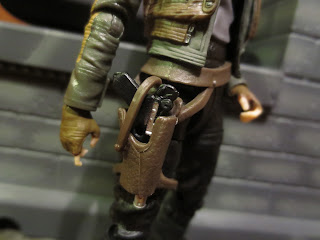 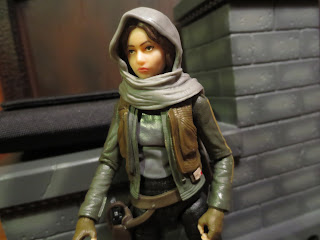 * While this seems to be Jyn's default outfit in the film, the packaging refers to this as her Jedha look. Jedha is a new desert moon inspired by middle-eastern holy cities, and this head wrap seems like it would fit in there nicely. It's a softer plastic piece with tails in the back that fits over Jyn's head and shoulders. As a member of the Rebellion, it makes sense to cover her head to prevent being identified by Imperial operatives. Plus, it looks really cool, too. 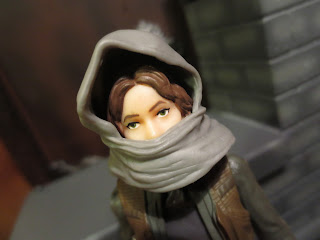 * My only complaint about this figure has to do with the head wrap she wears: It's really, really frustrating to take this off. Sometimes it just seems stuck on there and I feel like I'm either going to take off her head or tear the wrap. Is anyone else having this problem? 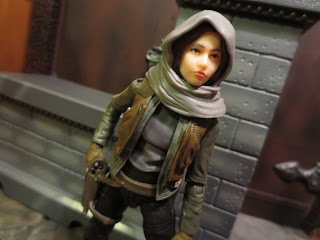 You know how a few days ago I said that the Imperial Death Trooper was my favorite figure from this series of Rogue One characters? Let me take that back: I actually like Jyn Erso better. There's just something about this figure I like and, despite her being a bit light on accessories, she just feels like an already classic Star Wars toy. She's a Great and a 1/2 figure and is well worth picking up. I have seen plenty of her on store shelves the past week or so, so Hasbro's making them. They're out there! Go find one before everyone else discovers how cool Jyn is, buys her up, and then people get mad because this toy is nowhere to be found. #BuyJynNowInsteadOfComplainingLater


This is the first action figure of Jyn Erso I've reviewed on Action Figure Barbecue. Don't worry! More are coming, though! In the meantime, check out these other Star Wars: The Black Series figures: