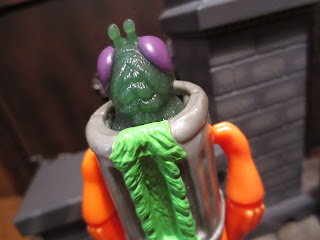 Today I'm going to look at another figure Kenner's 1988 Haunted Humans subline of The Real Ghostbusters: Terror Trash. Terror Trash appears to be your standard public sanitation worker but turns into a hideous, flying Mothman like creature. This is one of those figures that I seem to always stumble across in bins of loose action figures. I guess pretty much every kid alive in 1988 had one of these as he seems to be insanely common. I owned one as a kid, too, but at some point I stupidly sold my Ghostbusters toys and Terror Trash was another unfortunate victim. I've now added him back into my collection, though, so let's take a look at this Kenner classic. More after the break... 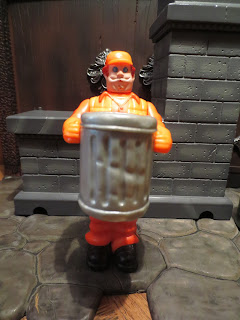 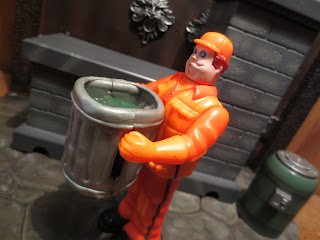 * Initially, I really though Terror Trash's human form was pretty lame. He looks like some kind of 1970s Fisher-Price toy or something. And that goofy expression and soulless eyes? That was what made me go from thinking this figure is lame to thinking that he's just a human "disguise" created by an inhuman creature. Like a less sophisticated version of the alien disguises from Men in Black, this guy surely sets people on edge whenever he's around because he just doesn't seem right. 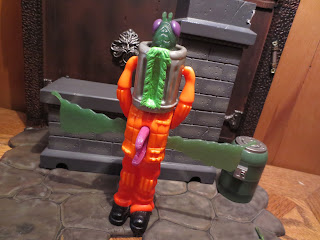 * Of course, that is because nothing is right: Terror Trash turns into a crazy flying insect creature. The trash can he's carrying flips up and covers the human head causing an insect head to pop out. Pull the wings out from the side of his legs and the weird pincer from his torso. 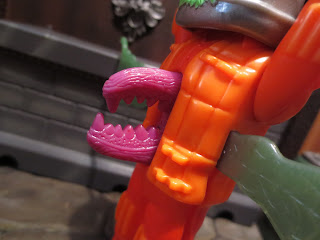 * I've always liked this odd pincer that pops out from Terror Trash's abdomen. Not only is it a really cool purple color but it has some wicked looking teeth in it. What exactly is this thing supposed to be? 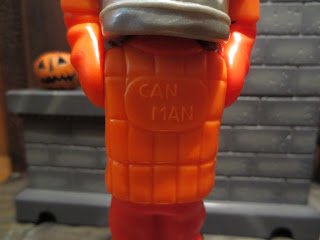 * I do love the detail on the back of Terror Trash's vest: It says "Can Man." That's a pretty silly name for a garbage collection company but I like it. It's just cheesy enough to work. 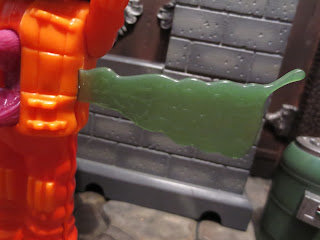 * One of the problems you'll see with many used Terror Trash figures is the wings broken off. The wings are fairly thin, brittle, and tend to end up broken on a number of figures. I wish they were a bit larger too, although I'm not sure how Kenner could have accomplished that. 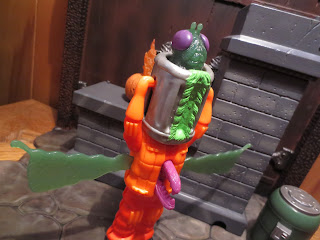 Terror Trash is a pretty colorful and fun figure in his transformed form. He's not very well articulated, though, as he pretty much only goes from one form to the second with no further frills. I like him but his wings could be better. He's a Great figure but definitely not my favorite in the Haunted Humans line.


Keep checking back here every day in October for more Toy Terror! Also, make sure to check out the Toy Bloggers United contest being hosted here this month! For more 31 Days of Toy Terror, check out my Hokey Halloween Horror page for spooky fun from 2016 and years past!
Posted by Barbecue17 at 10/10/2016