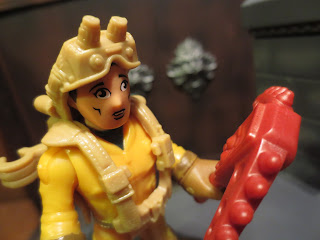 With all the spooks, spirits, and slashers taking part in 31 Days of Toy Terror, aren't you glad to have a Ghostbuster hanging around? One of the biggest surprises of Imaginext Collectible Figures series 7 is this "totally not a Ghostbuster" Ghostbuster! Imaginext does a great job of paying homage to various pop culture icons in their fun, stylized toyline and this one might just take the cake. While he doesn't look like any particular one of the Ghostbusters (I think he kind of resembles Mads Mikkelsen) his awesome equipment totally gives him away. If busting make you feel good, too, then you definitely need to check out this review... 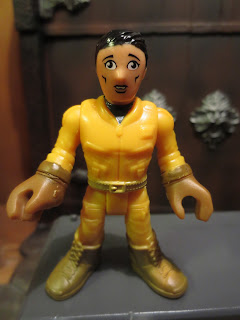 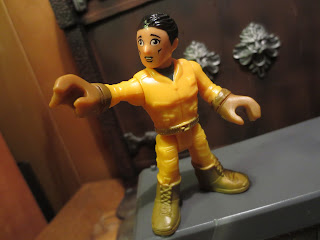 * Again, I'm always happy with the quality and the articulation on these little guys. While they're only about 2 7/8ths inches, they remind me a lot of some of the various toylines of the 1980s and 1990s due to the random character selection, the durability, and the accessories. 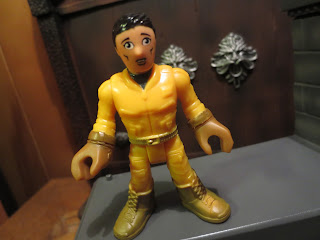 * Rather than being clad in a tan flight suit, this Ghostbuster is wearing a mustard yellow suit with tan gloves and boots. It looks pretty good although I wish there were some sort of logo on the shoulders. That would have been a neat place for the Imaginext "i" logo. 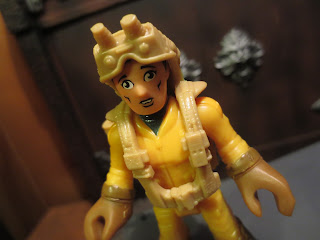 * This Ghostbuster comes with a proton pack with a shoulder harness and attached Ecto Goggles. Those Ecto Goggles look amazing, don't they? They really elevate the overall appearance of the figure and look darn cool. They can be pulled down over the Ghostbuster's eyes with a little finagling. I also dig the walkie-talkie on his left shoulder strap. 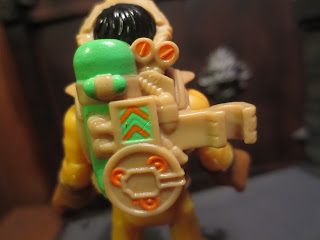 The "Proton Pack" looks really cool. I'm totally digging the mixture of colors and the paint apps. Plus, there is a place to store the PKE meter. It looks like a mixture of the standard Ghostbusters proton pack and the slime blowers from Ghostbusters II. 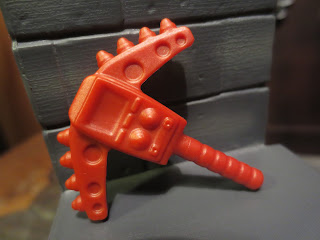 * This PKE meter is really, really impressive. Look at how well Fisher-Price captured it's likeness. I honestly think it's better than the accessory from the vintage Real Ghostbusters line (the one that came with the Screaming Heroes Egon Spengler). I could see collectors of the vintage line picking these up to outfit those older toys with really cool PKE meters. 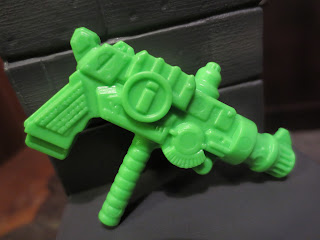 * Last, and kind of least but still cool, is this gun. I'm calling it a particle thrower although it is unattached to the backpack like the Ghostbusters' weapons. It's also bright green and looks more like a Nerf gun or something that Kenner would have released along with one of the Fright Features Ghostbusters during the vintage line. I like the detail on it, though. it's pretty slick. 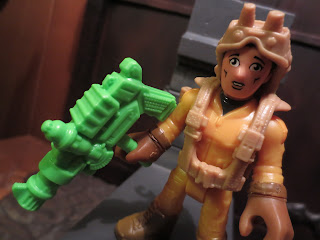 * My biggest negative with this figure is simply that the Imaginext figures really aren't designed to hold a weapon like this. The gripping handle is in the middle but the larger trigger can't be held by the figure. It looks OK at rest but is awkward when trying to do an action pose. 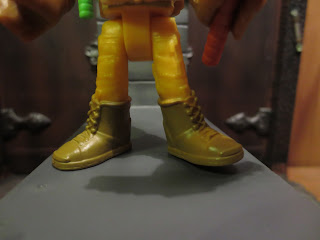 * Here's another weird thing about this figure: He doesn't stand flat on his feet. I've never seen this on an Imaginext figure before but the feet are uneven and both can't rest on the ground at the same time. 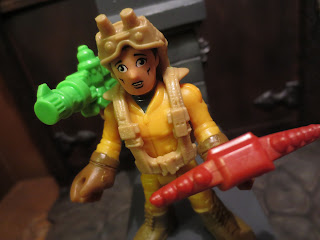 While this might be my favorite figure in this series simply because it's a Ghostbuster, I'm definitely disappointed by the fact that the gun isn't very functional. It's still cool, though, and I imagine it won't diminish your enjoyment of the figure too much. How cool is it to get a generic "Ghostbuster" in this line? I'd love to see a female Ghostbuster in a future series with a trap and a remodeled gun, but for now this figure is a Great addition to the line.

Keep checking back here every day in October for more Toy Terror! Also, make sure to check out the Toy Bloggers United contest being hosted here this month! For more 31 Days of Toy Terror, check out my Hokey Halloween Horror page for spooky fun from 2016 and years past!
Posted by Barbecue17 at 10/22/2016