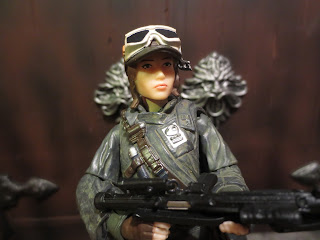 Today I'm looking at the last Rogue One figure from the Black Series that I've been able to pick up: The K-Mart exclusive Sergeant Jyn Erso (Eadu). At this point we have no idea what Eadu refers to, but it's probably a planet. The currently available Cassian Andor figure is also given the (Eadu) designation, so Jyn at least has some company. I'm really excited to see K-Mart back in the exclusive game this time around as I really liked both the Kylo Ren and Rey they offered for The Force Awakens. I actually ordered this figure through K-Mart's site to store feature which proved to be very easy to use. No shipping costs and the figure was ready in just a few days. Let's take a closer look at Jyn Erso in her Eadu duds after the break... 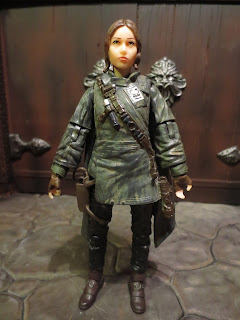 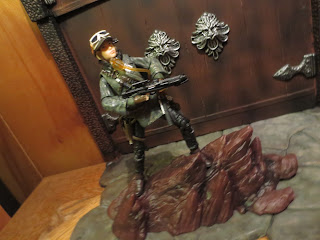 * This version of Jyn Erso shares a number of pieces with the figure I reviewed yesterday (legs, right hand, and torso) which means it also has the same great articulation. Jyn can take a number of combat positions, even holding her E-11 blaster with two hands. 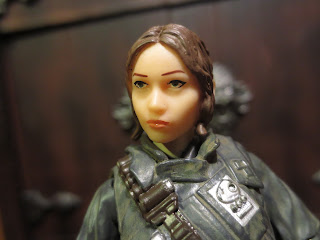 * Jyn has a different headsculpt from the standard figure and while I don't like this one as much, it still looks pretty good while fitting into the Star Wars: The Black Series aesthetic. Jyn looks a bit harsher here and her hair is pressed down a bit due to her combat helmet. 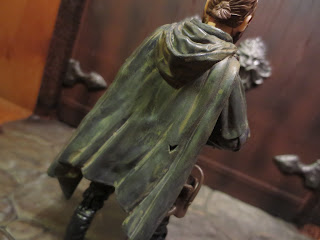 * Jyn's cloak has a really nice drybrushing effect that gives it a dirty, worn look to it. It really adds a lot of detail to the figure, something that's always a plus. 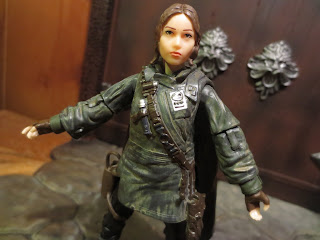 * Here's a look at Jyn's outfit from the front. To achieve the effect of this being a combat poncho or a parka of sorts, the main body of the garment is a separate piece permanently affixed over the standard figure body. The sleeves are nice and large, making this look like a somewhat bulky outfit designed to help keep out the elements. 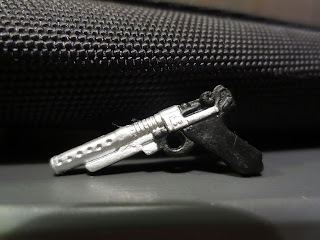 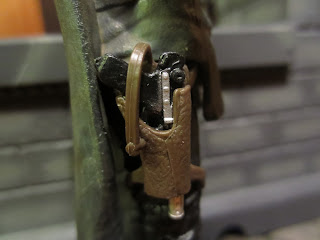 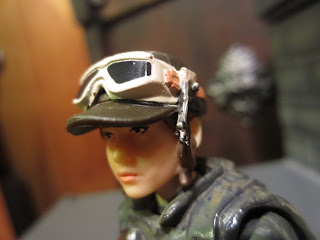 * I love this helmet. It's fits on Jyn's head perfectly and just looks really cool. There are some great paint applications on here, too. 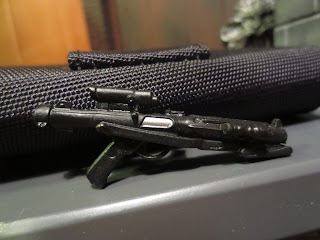 * Sergeant Jyn Erso comes a BlasTech E-11 that I'm sure she acquired from some hapless Imperial. What's cool is that not only is this a new sculpt but it features some sort of sensor or target designator on the barrel. Lots of the Rogue One blasters have these designators, so I'm wondering if this is a feature we'll see on the weapons in Rogue One. 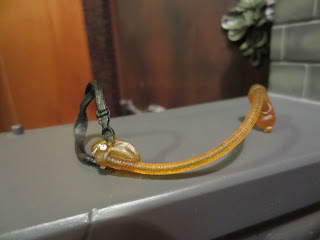 * While we don't know anything about what Eadu refers to yet (probably a planet with a hostile environment) it appears that Jyn needs to strap on a breath mask at some point to navigate it. Her mask is molded in a soft, translucent orange plastic with a black strap. It looks extremely similar to the Roamer-6 masks Han Solo keeps in the Millennium Falcon. The strap is a bit large for Jyn's head but it fits on nicely when she's wearing her helmet. 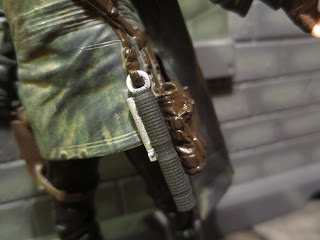 * I have no idea what this cylinder that can hang on this hook on Jyn's bandolier is. My guess is that it's an explosive of some sort; perhaps a larger, cylindrical thermal detonator. It's a nice sculpt and I love how she can actually tote it around, but right now it's a complete mystery. I can't imagine this being Death Star plans, can you? 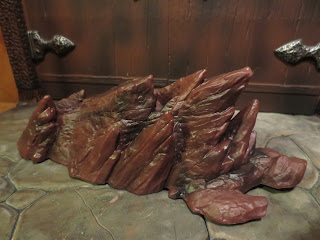 * The staple of these deluxe K-Mart exclusive sets seems to be an oversized diorama piece that connects together with another figure down the road. Jyn comes with what we can only assume is a craggy bit of rocky terrain. I love the look of this piece as that sculpt is really sharp, the paint gives it a richer look, and there are two indentations with pegs for Jyn's feet to attach. I wonder what figure will eventually attach to this base? 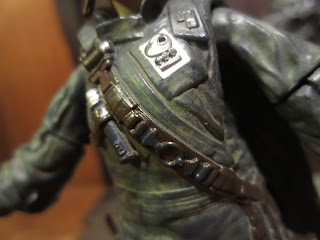 
* While I like the fact that Hasbro used a softer material to replicate the bulky look of a ponch or parka, it does make the various details adorning Jyn's outfit look a bit soft and underdeveloped. I wish things were a bit sharper because there seems to be a lot of cool elements here. 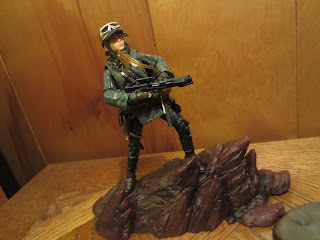 I'm quite impressed not only by how much unique tooling this figure has, but also by how many accessories it comes with. Jyn Erso is loaded for combat and looks darn cool standing atop the rocky display base she's loaded with. Considering everything cool this figure comes with, I think it's easy to this as one of the standout figures available right now. This Jyn is an Epic figure and well worth hunting down or ordering from K-Mart's website. I hope everyone gets to pick her up because she's a very cool version of the character who is rocking some very original trilogy styled wardrobe pieces.

I just reviewed the single carded Sergeant Jyn Erso yesterday, so check that out if you're interested. If you want more reviews of the Black Series, check out my reviews of: