31 Days of Toy Terror Lives: Astaroth from Monster in My Pocket by Matchbox 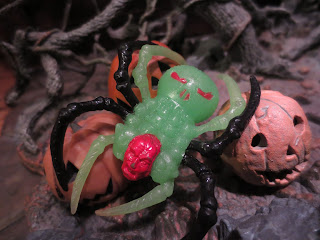 Today I'm looking at a figure from Matchbox's Monster in My Pocket line. I've owned a few of these over the years but during late summer this year I snagged a few more for fun and because I thought they would make for some fun, short reviews during 31 Days of Toy Terror. Today's review is a figure from Monster in My Pocket's fourth series (the Super Scary Series): Astaroth. Think this is just a spider? Think again: Astaroth is actually the Great Duke of Hell. He's number 102 in the Monster in My Pocket series and was worth 100 points in the little game that went along with these figures. He also, while loosely based on Canaanite and Babylonian deities, gains a lot of recognition in Hebrew and Christian circles as a demonic tempter who is opposed by St. Bartholomew. Honestly, I thought this was just a spider! Now I wish someone would make a line of Saints in my Pocket. Wouldn't that be cool? Anyways, over the line's run (MIMP was way more popular in Europe than in the USA) the various MIMP creatures often caused controversy due to being based on various deities and demons from various cultures and religions and at some point Astaroth was rereleased as Mutant Spider. Let's take a look this spidery demon after the break... 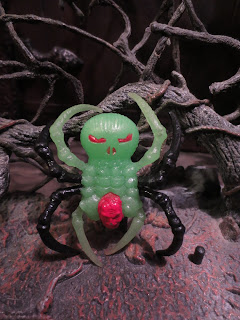 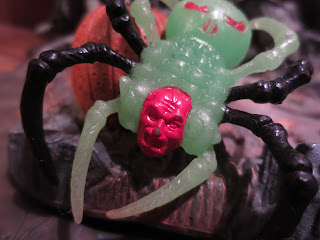 *Gosh, that face is creepy, isn't it? Definitely the more human looking face on a spider body makes this more than just your average spider. I've never been a huge fan of the painted look on these figures and Astaroth here doesn't change that. I like the legs and skull on the back but the solid painted face just takes away some of the charm of solo colored minifigures. Still...creepy. 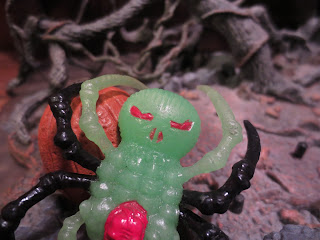 * Check out that weird skull on the abdomen? I do like the smaller details like the eyes and nostril slits here when they receive some color. The mixture of colors really does remind me of a Creepy Crawler I would have made when I was in 3rd grade. The texture of the figure does, too. He's kind of rubbery. He also kind of glows in the dark. 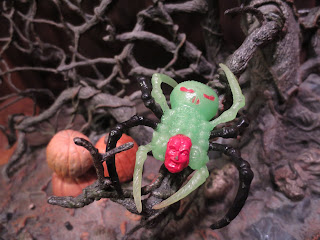 Astaroth is a creepy looking spider but he's definitely not the most interesting looking Monster in My Pocket figure out there. I don't find the Super Scary Series figures to be as cool as the standard smaller, single color figures from the earlier sets. Still, if you're looking for a demonic spider, this guy certainly fits the bill. He gets a Good rating from me but I've got plenty more monsters to review. Their are some real winners coming. Trust me!


Keep checking back here every day in October for more Toy Terror! Also, make sure to check out the Toy Bloggers United contest being hosted here this month! For more 31 Days of Toy Terror, check out my Hokey Halloween Horror page for spooky fun from 2016 and years past!
Posted by Barbecue17 at 10/05/2016