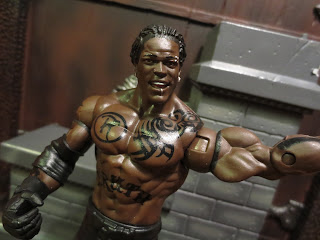 Today I'm looking at R-Truth from Mattel's WWE series 59. R-Truth has had a number of figures in the past but this is the first one I've been able to pick up. Currently R-Truth has a pretty good tag team partnership with Goldust as the Golden Truth that works just because of how entertaining those two guys are. R-Truth has been a former tag team champ with Xavier Woods, a United States champion, and a two time Hardcore champ. Will the Golden Truth once again propel him into the title scene? Probably not but I still can't help but love R-Truth. Let's check out his newest figure after the break... 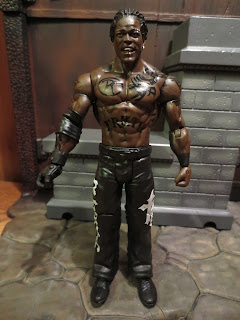 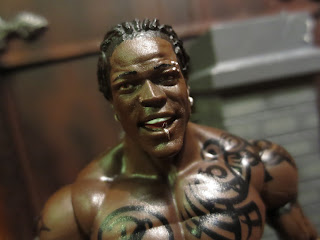 * This is an incredible likeness of R-Truth. Seriously, it looks just like him. You could definitely hold this head up to nearly any WWE fan and they could tell you who this is. And that's what's up. By the way, his piercings look great, too. This is really excellent sculpting and paintwork, 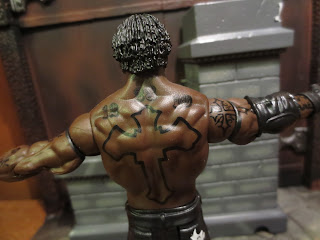 * Turn R-Truth around and not only can you see the giant cross tattoo on his back but you can see his excellent hair. His hair looks fantastic! * Mattel always does a good job on the tattoos on their WWE figures and even this basic R-Truth is pretty impressive. Check out all of the work on his chest. There's also plenty of tattoos on his shoulders, biceps, and forearms, too. 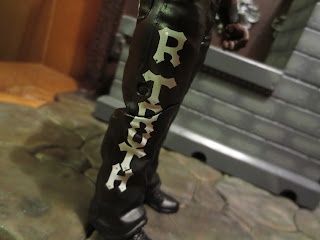 * R-Truth has his name printed on the right leg of his pants (so he remembers whose they are) and a stylized "RT" design on the right. Both of these look really sharp and even have some silvery studs painted onto the letters to give them some extra shine. 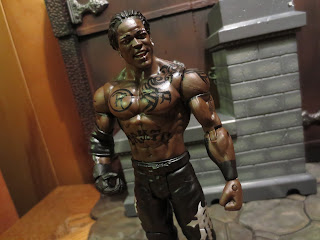 * While the basic figures have reduced articulation from the Elite series figures, they're also only around $10 bucks. While he doesn't have ball-jointed hips or a mid-torso hinge, Truth is still a really fun figure to play with. I honestly wish that the team working on the articulation for this series would take a few days and teach Mattel's DC team how articulation is done. These are some of the best, well articulated figures on the market, even with the reduced articulation of the "basic" series. 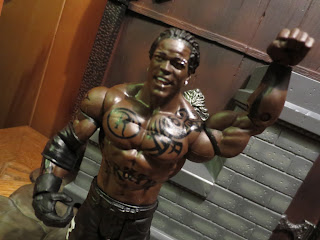 This guy is a Great 1/2 basic figure. Seriously, I think these are the best $10 or less action figures on the market, assuming you're somewhat interested in wrestling. The quality, sculpting, and paintwork can't be denied, though, and I really wish Mattel would use this articulation model in their DC lines. R-Truth shouldn't be too hard to track down in stores still so take a look around and you might be able to add this guy to your roster!


I haven't reviewed any other R-Truth figures but I have reviewed plenty of other WWE figures from Mattel, including: