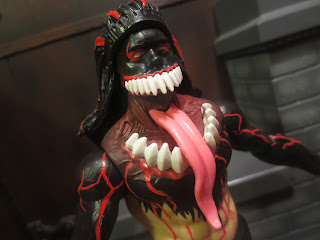 Today I'm looking at the second figure from the WWE Mutants series that I picked up: Finn Balor. Unlike the other characters in the WWE Mutants series, Finn Balor actually does dress up in an elaborate costume, thus giving Mattel something to shoot for when designing a mutant version of the character. Finn Balor takes on the persona of the Demon King, coming to the ring in a slow, walking crawl with some incredible music setting the proper mood. What Mattel has done here has taken Finn's bodypaint and style and imagined them as an actual creature. It's actually a really cool concept; this is probably how Finn is "supposed to appear" to his opponents. Let's take a look at this very unique wrestling figure after the break... 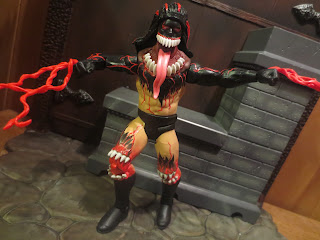 * One of the things I really like about Mattel's handling of the WWE license is that while they have different price points and themes, generally they keep all of the figures in the same scale and style. While Finn Balor has a bit less articulation than a standard figure (and far less than an Elite), he still can play well with those others. You know, other than the fact that he's an actual terrifying demon. 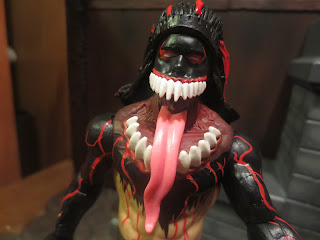 * The headsculpt is really crazy. I love the way Mattel interpreted Finn Balor's makeup as if it were real. The way they sculpted his shoulders to look like the interior of a mouth is just too cool. 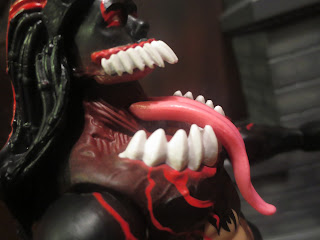 * From a side view you can see how the enormous teeth and the long, slimy tongue really stand out from the body. Plus, moving his head around, up, and down makes the mouth open and close. That's a pretty cool feature! 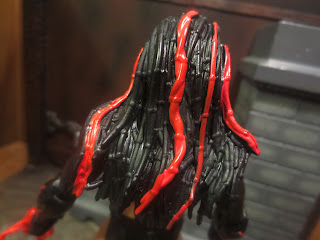 * The hair is pretty cool, too. It's sculpted pretty similarly to the Elite versions of Finn, complete with a bit of red mixed in, and it works very nicely here, too. The red and black looks pretty incredible together. 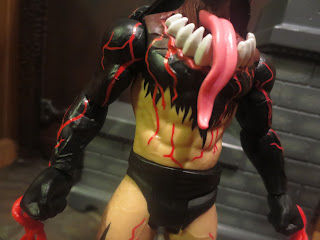 * The paint work is really nice, especially considering this figure is on the lower end of Mattel's price range for their figures. The normal looking body is covered with jagged black paint and red "veins" all over. 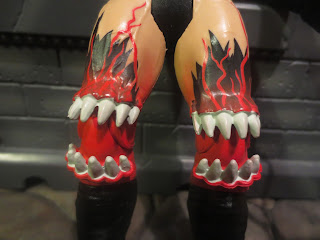 * These knee pads are flipping insane. Look at that! The knees are essentially big mouths with some crazy paintwork, too. Imagine getting kneed in the jimmy with one of these; it'd be catastrophic! Best knees on a figure this year, guaranteed! 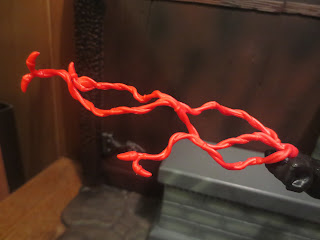 * While the real Finn Balor has streamers on his wrists that add to his dramatic appearance, this mutant version has organic looking tendrils emitting from his hands. They're made from a material that seems sturdy enough to not bend and warp over time, but pliable enough to keep them from snapping. Nice work on these. 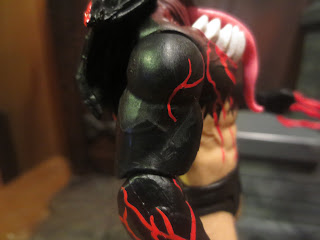 
* The only thing that frustrates me about this series is that they don't appear to have bicep swivels (cyber-Cena doesn't have one, either). It really limits the posing potential for these guys. 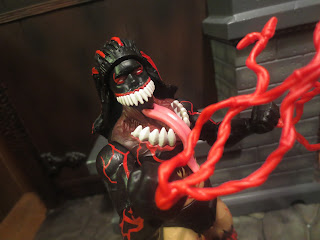 This is a really impressive figure! Not only does it look really cool but it also is a pretty novel twist on an actual WWE Superstar. Considering Finn Balor's elaborate bodypaint and dramatic appearance, you could almost imagine that something like this involving prosthetic pieces could one day be used in something huge like a Wrestlemania entrance! This is a Great and a 1/2 figure thanks to the exceptional design, headsculpt, and paintwork. It's easily the standout of he WWE Mutants line.