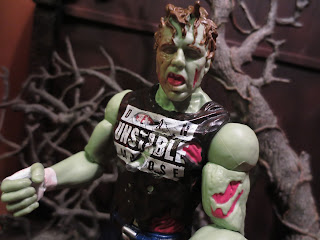 Dean Ambrose is, as of the day I'm writing this review (prior to Backlash 2016), currently the WWE World Champion. He is also a zombie. Well, in this line anyways. Mattel has done something crazy by merging the over the top personalities of the WWE with the still ongoing zombie craze to create the WWE Zombies action figure line. Whether you really like wrestling and get a kick out of seeing a zombified version of your favorite superstar or you're planning to mix these guys in with other zombie action figures, I really think Mattel has released a pretty solid toyline here. I'm not sure what kind of longevity it will have but currently I've purchased 5 of the 8 figures in the series and a sale or a bit of extra spending money could easily convince me to pick up some more. Yesterday I reviewed my first choice pickup, Bray Wyatt, and today I'm looking at my second choice, the Lunatic Fringe himself: Dean Ambrose. You know, they really should have called him Dead Ambrose. Or Dean Inrepose. I don't know. Maybe it's better that they didn't. Let's jump in and see how zombie Dean Ambrose stacks up, eh? 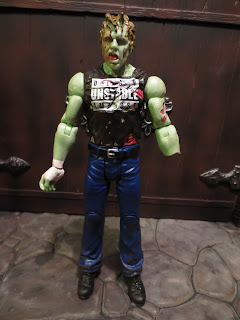 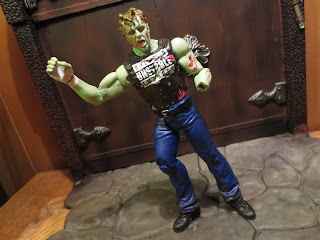 * First of all, what's positive about this figure is that it's Dean Ambrose as a zombie. Secondly, this is a pretty fun, sturdy figure. These are built on Mattel's "basic" WWE bodies so while they're not crazy articulated, you still get enough movement for a zombie toy. Plus, they're almost have the price of a standard "collector's line" like Marvel Legends, DC Comics Multiverse, or WWE Elite series. 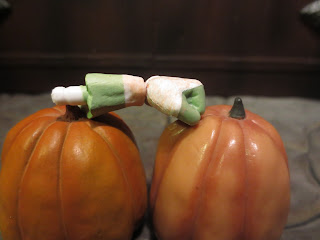 * While his "wight" hand his OK, Dean's left hand is removable at the forearm. This is a cool feature as the hand is still fully articulated and it stays on quite well. If this removable arm is a work, it's a darn good one. 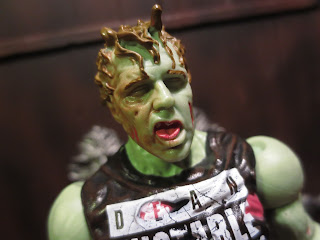 * I love this headsculpt. Dean Ambrose has some fantastic facial expressions and this one really nails that aspect of his performance while still making him look like a great zombie. Seriously, this is definitely one of the best zombie headsculpts I've seen in a zombie action figure line. Tell me you can't see this guy roaming around in Dawn of the Dead. I like the green pallor of the skin as it makes these figures stand out a bit. 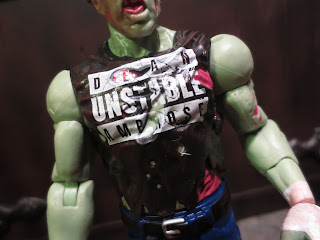 * The front of Dean's shirt features the "Dean 'Unstable' Ambrose" logo along with plenty of sculpted and painted rips, tears, and gashes. There are some nasty patches of exposed muscle and tissue on Dean's left side. Not sure how he bit the dust but I'm guessing Seth Rollins had something to do with it. 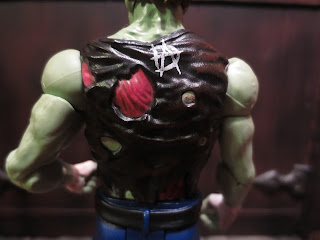 * Turn Dean Ambrose around and you can see some more of the damage done to the left side of his body as well as more scrapes, tears, and the "DA" logo on his shirt. This is pretty nice work for a figure that only costs around $13 dollars if you ask me. 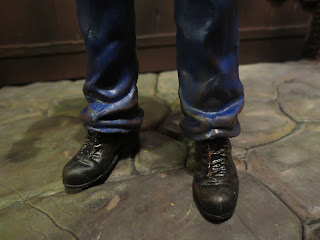 * Dean's jean don't feature any unique zombie sculpting (they're the same as most other basic series Dean Ambrose figures) but they do have an awesome muddy paint job. You can tell that Dean's been creeping around through some graveyard all night. 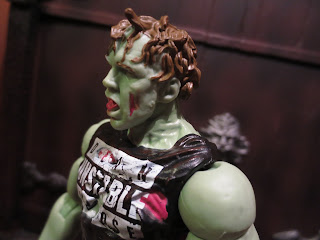 * Disappointingly, zombie Dean Ambrose only has a swivel neck and not a ball-jointed head. Even the basic figures usually have ball-jointed heads so I'm not sure why the decision was made here to give this newly sculpted head and torso a simple swivel. Is a true ball joint really any more elaborate? 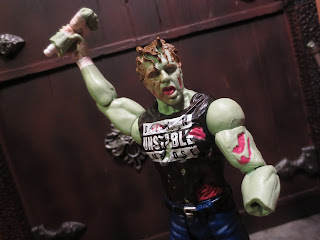 The WWE Zombies subset is just firing on all cylinders for me: These are fun toys, interesting collectibles for wrestling fans that like horror, and really good zombie figures to pad out your display. I have a pretty nice collection of various zombies from Land of the Dead, Neca's Cult Classics, Attack of the Living Dead, and the various Resident Evil lines over the years, and these WWE Zombies are going right in there. Dean Ambrose is a really fun toy and definitely worth a look if anything about the source material appeals to you.

I've reviewed plenty of other wrestling figures, too, including: