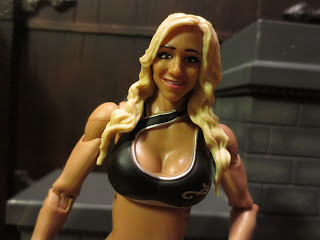 As I'm writing this it's Sunday afternoon and it's about 3 hours until TLC starts and Charlotte will be defending the Divas championship against Paige.  Just for full disclosure, I'm absolutely going to be cheering for Paige. I really like Charlotte but when she goes up against Paige or Becky Lynch? Not so much. Today I'm looking at another figure from Mattel's "basic" WWE line and it's Charlotte in her NXT outfit. Mattel was working on this figure before Charlotte got bumped up to the main roster as part of the Diva's Revolution this past summer so there's no title included or reference to her "Do it with Flair" catchphrase on her outfit. Still, that's nothing new as we know that the Mattel WWE figures typically lag around 6 months to a year behind their television counterparts. Charlotte had a great NXT run and has been a huge hit on the main WWE Divas roster, as well, but how does she fare in action figure form? Read on and find out after the break... 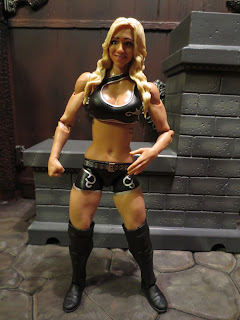 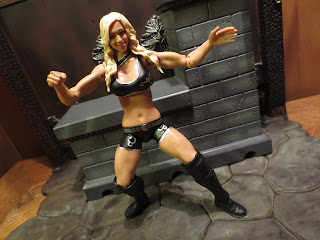 *One of the great things about the Divas figures in in Mattel's WWE lines is that even the basic Divas still have the "Elite" styled articulation. Charlotte is quite fun to pose and feels incredibly sturdy. Her upper torso joint really has a great range of motion which helps add to the figure's movement. 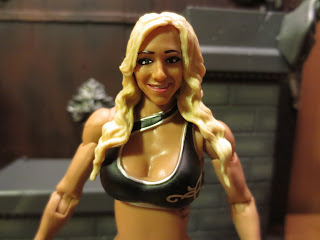 * So...here is Charlotte's face. Most of the sculpting is fine here on her body and outfit and her hair actually looks pretty good, too. There is something about her face, though, that seems a bit off. It's not a terrible likeness but it's not definitively Charlotte to me. I like it, though, but whenever an Elite Charlotte comes out, I hope we get a new headsculpt.Still, it's not bad looking or unattractive, so that's always a plus. 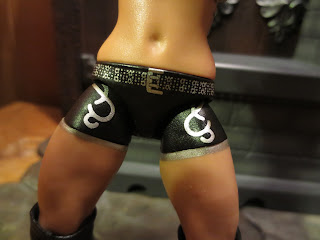 *The paint work on Charlotte's outfit is really sharp. The black and silver combination looks great and is cleanly applied. I don't like this as much as some of her newer outfits, but it's still pretty eye-catching. While the belt is just painted on, it's a pretty incredible detail. 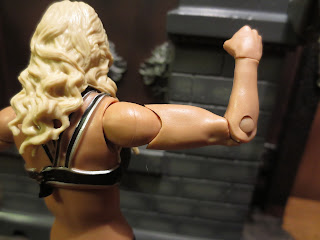 * I praised the Elite styled articulation on Charlotte above, but I do have to make mention of a problem with the biceps being a bit weak. I've had this problem with a few other Divas figures: When you go to move the swivel/hinge shoulder, it is much more likely that the bicep will bend versus the hinge on the shoulder. I wish the bicep peg was a bit sturdier. 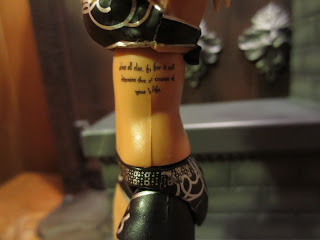 * Mattel usually does an excellent job with the tattoos on their WWE figures and, for the most part, the printing on Charlotte's tattoo on her left side is no exception: It is actually legible as most of Proverbs 4:23 "Guard your heart above all else, for it determines the course of your life." Unfortunately, it's printed on the seam where the front and pack torso meat and it doesn't come together properly. It's a shame that such great work is sabotaged by some poor quality control. 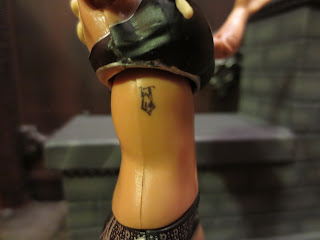 *More tattoo problems! On Charlotte's right side she has a tattoo of a cross. Once again, the work on the actual tattoo looks nice but Mattel only stamped the bottom part of he cross, meaning that when you move Charlotte's torso you can see there's no top. The really should have stamped a bit more of the cross so that it worked with the articulation. 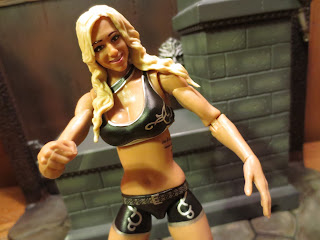 I hope that Charlotte has a long career with the WWE and that we'll see her in Mattel's accompanying action figure line many times in the future (I wonder if we'll ever get a Charlotte and current Rick Flair Battle Pack?). For a first figure of Charlotte, this isn't too bad. The tattoos leave a lot to be desired but hopefully Mattel works those kinks out next time. While they're no longer a team, I absolutely loved team PCB (I think Submission Sorority was a cool name, too, although I get why WWE wasn't keen on it) and I'm looking forward to having Elite versions of all three of those ladies from that particular era. So come on, Mattel? We need new Elites of Paige, Becky Lynch, and Charlotte? Oh, and a rating for this figure? A Good and a 1/2).


I've reviewed a ton of Mattel's WWE figures, including: