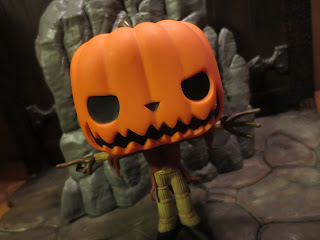 It's Halloween! It's Halloween! It's Halloween! Today I'm giving you two super spooky reviews as an extra treat! If there has been a movie that has kind of defined Halloween 2015 for me, it's been The Nightmare Before Christmas. My little daughter has wanted to watch this movie pretty much non-stop since the middle of September. In fact, I think she'd watch the "This is Halloween" musical number over and over on repeat if we'd let her. It's OK, though, because I love it. I love this movie and I was thrilled to find this Pop! out in the wild on a Toys 'R Us run because Jack Skellington in his Pumpkin King scarecrow guise is one of my favorite character designs ever! I'm not a huge Pop! collector but when I first heard about this guy I knew I'd end up buying him. If you're taking a few minute out of your Halloween to stop by Action Figure Barbecue and read some of my action figure or horror movie reviews, just know that I really appreciate it! Now, onto the festivities... 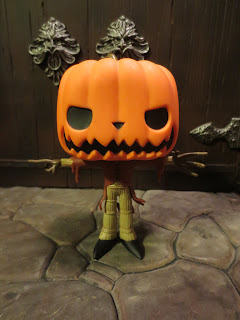 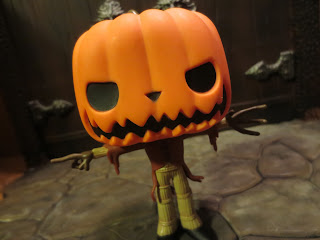 * I love this headsculpt! It really manages to capture both the pumpkin head that Jack wears as the Pumpkin King of Halloween Town and a little bit of Jack's skeletal appearance and whimsical nature. Obviously, if you've ever seen my avatar (hint: Look on the left or right margin!) you know that I'm a huge fan of this look. 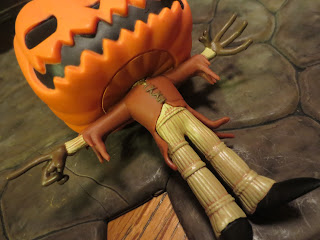 * I love the body on this Pop! Not only is the costume very accurate with the laced up, tattered red tunic and the straw like legs but the right hand is actually posed in a pointing gesture. It's just like at the beginning of The Nightmare Before Christmas when we first see the scarecrow spinning in the wind up against the Halloween Town sign. 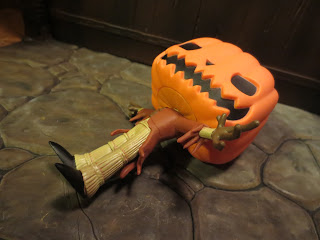 Unlike most Pop! figures I or my wife own, this one tends to tip over easily. In fact, it actually took me a bit of bending the figure some to get it to stand up properly. The body is thinner than many others and doesn't seem to have a solid sense of balance. 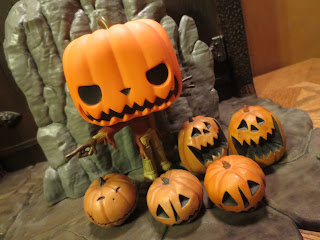 Other than having some trouble standing up (which is fixed with a bit of bending or possibly using the hot water technique) this is a really well done Pop! While he's not as recognizable in this outfit as in his typical black and white pinstriped suit, Jack looks fantastic here as the living embodiment of Halloween. Like Sam from Trick 'R Treat, he really is a character that perfectly captures the fun, frightening, and slightly mischievous nature of Halloween. I'm giving him a Great rating! Now get out there and get some candy!


Oddly enough, I haven't reviewed that much Nightmare Before Christmas stuff on here. Between my wife, my daughter, and I we have plenty (including many of my childhood toys from the original release). On here I've reviewed:

The Nightmare Before Christmas by NECA
Clown

I've also reviewed a couple other figures from the Pop! Movies line: