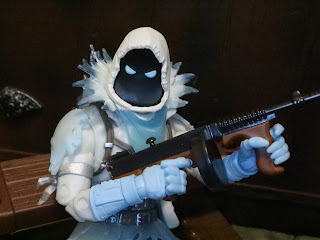 Sadly, it seems like Hasbro may be taking over the 6 inch Fortnite line from Jazwares, leaving Jazwares with just the 4 inch line. I'm sure Hasbro will make decent figures but I have my doubts that they'll have the same number of accessories as Jazwares' releases. I also don't look forward to seeing them revisit the characters Jazwares has already released or putting out the usual plethora of retailer exclusives that are impossible to find. Jazwares has done a great job with this line and it's a shame that Hasbro was probably able to bully their way in and overtake it after Jazwares proved it was a viable property. Anyways, you're here to hear about Frozen Raven, aren't you? It appears that there was a small subset of "Frozen" Fortnite skins and Raven was one of those. I reviewed the original Raven figure last year (though he was released at the end of 2019) so it's been a minute since he's been on shelves. Is this a worthy repaint? Let's check out Frozen Raven after the break and find out... 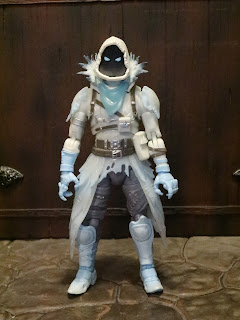 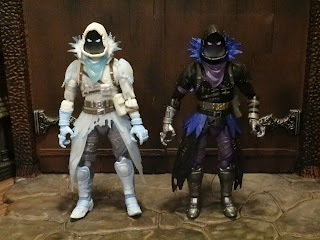 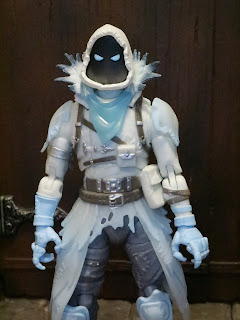 * The sculpt on Frozen Raven is the same as the figure released in 2019 but the white and icy blue paintjob looks fantastic and definitely updates the figure to feel quite new. The light blue touches really add a nice dash of color and everything is neat and clean. 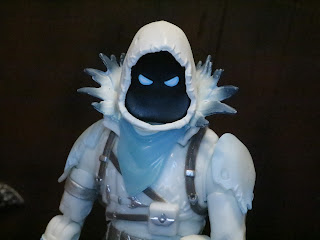 * Frozen Raven's headsculpt is a hooded face with no features. Just glowing eyes peaking out. It's cartoonish but effective, capturing the Fortnite aesthetic nicely. 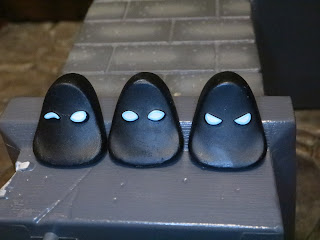 * Like the original figure, Frozen Raven comes with three alternate face plates. Well, that's what I'm calling them still, even though Raven has no face. It's really just his eyes. You've got  winking eyes, regular eyes, and angry eyes. These actually swap out quite easily underneath the edge of his cloak, so you don't see any gap where the face plate attaches. 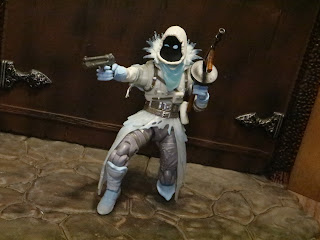 * Like the rest of the Fornite: Legendary Series, the articulation on Raven is incredible. He feels sturdy, durable, and has articulation that feels like it could give Toy Biz's Marvel Legends line a run for its money. The inclusion of things like toe joints, lots of swivel hinges, double hinged elbows and knees, and butterfly pecs allow this guy to take some crazy poses and uses two-handed weapons with ease. The hand grips are quite good on this guy. 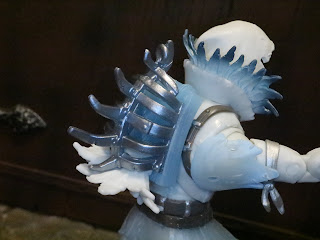 * Raven's back pack is a frozen version of the Iron Cage and it really suits him. It's an actual iron cage attached to a wooden backpack, adorned with white feathers. Looking at pictures, I think I have mine on upside down (I had the backpack of the original figure on upside down, too). 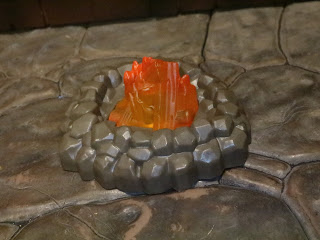 * Frozen Raven comes with the Cozy Campfire, which is an actual Fortnite thing. It's a cool piece, much simpler than some other action figure campfires, but still pretty cool. I like the translucent flames! It makes for a nice, warm looking play fire. 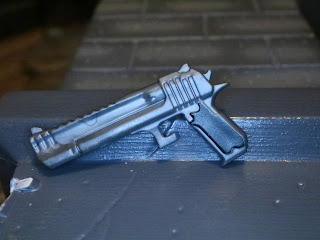 * Frozen Raven's Hand Cannon, a pistol which seems to be based on the Desert Eagle, also came with the original Raven. The open trigger guard makes holding this one quite easy and the figure looks great with it. I love that Jazwares gives each weapon some paint hits. 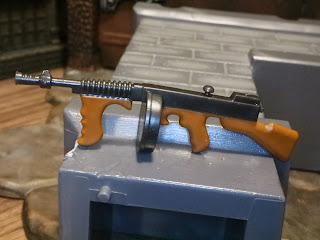 * Frozen Raven also comes with a Thompson submachine gun with a drum magazine, which the game calls the Drum Gun. While the detail follows the more minimalist aesthetics of the Fortnite line, this still is a pretty cool replica of the Tommy gun, AKA the Chicago Typewriter. The paintwork is quite nice on this one an the figure holds it really well. 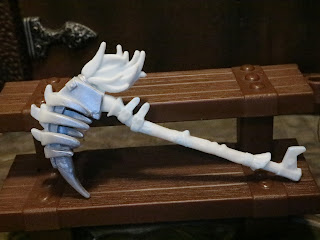 * The harvesting tool is called the Frozen Beak. It's a pickaxe styled instrument that definitely fits with the aesthetic of the figure and the back pack and comes in a white and silver color scheme. 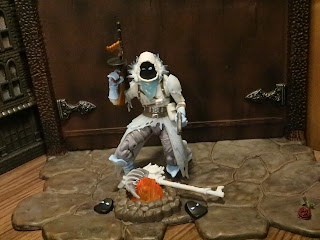 You know what? I actually think I like Frozen Raven a bit more than the standard figure. His hands are tighter, I love his frozen paintjob, and the campfire is a cool little accessory. There aren't that many straight up repaints in Jazwares' Fortnite: Legendary Series but this one is a pretty well thought out one with a very unique look. Honestly, it's pretty cool posing Frozen Raven and regular Raven together. They got kind of a Spy vs Spy thing going on, you know? This is a Great and a 1/2 figure and a solid purchase if you collect the line and dig the color scheme.

If you're a fan of Raven I've also checked out the Fortnite: Legendary Series Raven.