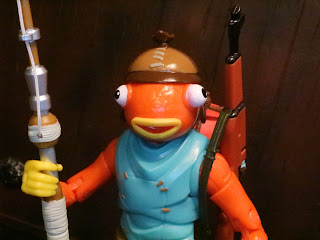 There was a recent drop of Fortnite: Legendary Series figures from Jazwares and now Fishstick has entered the fray! I love this line (in spite of the terrible hand design) and the crazy characters Jazwares picks from the Fortnite universe. Fishstick is costume is extremely popular, even though Kanye doesn't seem to understand him. Does he drink Bailey's out of a shoe, you might wonder? He's some sort of humanoid koi and is available as part of the Fish Food set. Considering these characters don't really have backstories or anything, nor do I play the game and have any idea about their in-game use or play style, I'm just going to jump in and start the review. Cast your rod and get ready for a half man/ half fish after the break... 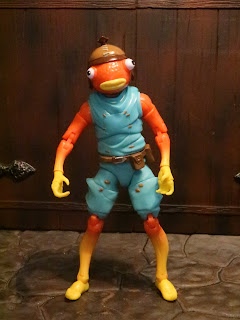 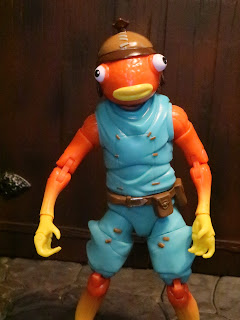 * Fishstick is a delightful looking character that seems like some sort of bizarre mixture between a peasant soldier from a fantasy world and Jar Jar Binks. Like the rest of the Fortnite: Legendary Series figures Fishstick is rendered in a animated, slightly exaggerated style that nicely captures the look of the game. Fishstick features some very bright colors so he ends up looking even more cartoonish than most of the other figures, but he fits in well with other crazy characters like Beef Boss, Crackshot, and Tomatohead. Of course, he's also a completely unique sculpt, which is something pretty impressive to find these days. Jazwares really seems to give this line their all. 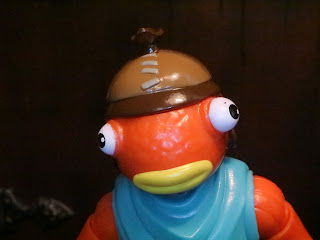 * Fishstick has a really funny face. It's very fish-like with bulbous eyes and lips. Big, yellow lips. Like most other figures in the line Fishstick has a few swappable face plates to give him different expressions. This is his normal face. 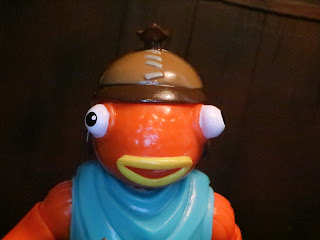 * The second face plate is a smiley face showing Fishstick in a good mood. I like the unusual helmet he wearing quite a bit, too. It's rather neat and quite fitting. 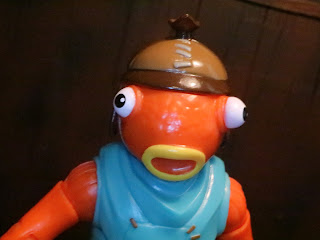 * Last up is Fishstick's surprised face. This one is hilarious, isn't it? 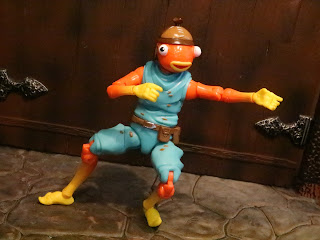 * Like the rest of his Jazwares' Fortnite: Legendary Series brethren, the articulation on this guy is incredible. He feels sturdy, durable, and has articulation that feels like it could give nearly any other modern line a run for its money. The inclusion of things like toe joints, lots of swivel hinges, double hinged elbows and knees, and butterfly pecs allow this guy to take some crazy poses. He can be very, very expressive! 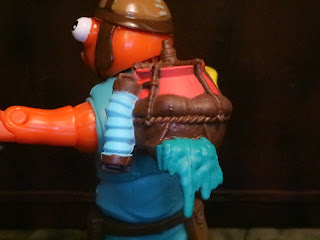 * Fishstick's back bling is called the Saltwater Satchel. It's a portable bucket of sorts adorned with some seaweed and... an accordion, maybe? It's pretty detailed and quite nicely painted, too. Jazwares really puts a lot of paint detail on the accessories, something that a number of other companies really neglect to do. 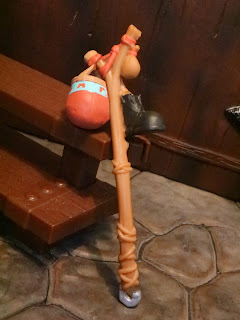 * This is Fishstick's Harvesting Tool and it's called Bootstraps. It's essentially a bindle with a boot, a small pouch, and a basket attached to it. I'm not sure what purpose it serves as a melee weapon (do you beat your foes with the boot?) but it makes for a really fun accessory. Maybe Fishstick is a modern day hobo who roams the coast? 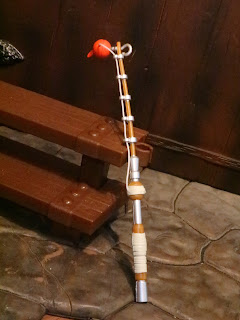 * Fishstick also comes with a really cool fishing rod. Why is a fish guy catching fish? I guess it lends more validity to the saying "There's always a bigger fish." This pole actually has a real string on it and a removable bobber. How crazy, right? 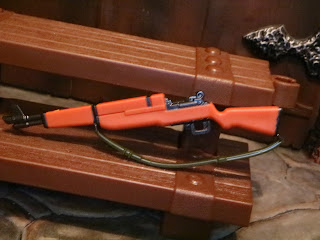 * We've seen it before but Fishstick comes toting the Infantry Rifle. The Infantry Rifle looks like a classic M1 Garand rifle with an iron sight and a sling, allowing Fishstick to tote it around on his shoulder with the rest of his gear. 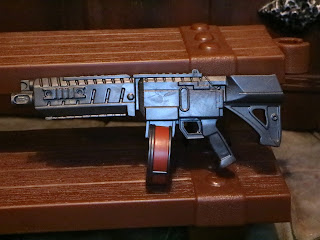 * Like Eternal Voyager, Fishstick also comes with a Drum Shotgun. This thing is awesome and is easily one of my favorite Fortnite: Legendary Series firearms, even if it seems a bit too "high tech" for Fishstick. 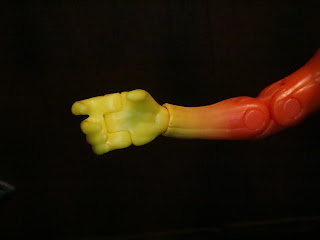 
* I'm still not won over by the hinged hands. In fact, I'd actively say they're a big negative on an otherwise amazing toyline. Just switch to regular hands, Jazwares! These things don't work all that well. 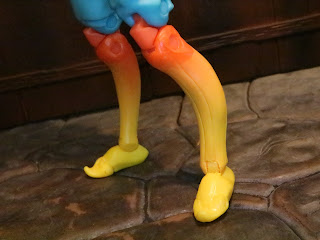 * I get that the bizarre legs are probably part of Fishstick's aesthetic but they're really odd looking and make it hard for him to take certain stances. 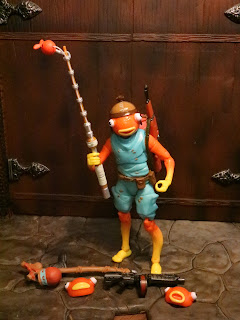 While he has the flawed hinged hands that this line has used since the beginning, otherwise Fishstick is a perfectly likeable figure. He's not a "cool" character like Eternal Voyager or Ragnarok, nor is he someone that will easily fit in to other toylines like the Visitor or Wild Card, but the odd charm and unusual accessories of Fishstick make him a real winner. He seems like a character from a bizarre video game, like Oddworld or something. Jazwares is really putting out some unusual characters in this toyline and Fishstick is definitely near the top of the heap in that regard. I personally like this line as it's fun getting characters with seemingly no story and no real rhyme or reason for release other than that they look cool. Fishstick is a Great and a 1/2 release in this line and another fun toy for Jazwares. They're doing some great stuff in this scale, aren't they?