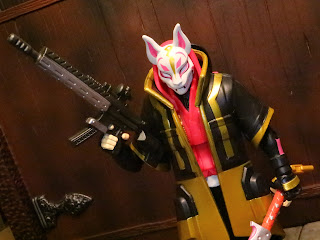 It really feels like everything has come out at once, doesn't it? New Fortnite: Legendary Series figures, G.I. Joe Classified Series, Masters of the Universe Origins, more Marvel Legends; The end of July and beginning of August has been crazy! Today I'm checking out another figure from Jazwares' Fortnite: Legendary Series line and this time it's Drift. Drift has apparently been around as a costume since 2018 and, like Omega: Max Level and Ragnarok: Max Level, Drift is a "skin" with different levels. Unlike those figures, though, Drift doesn't come with the parts to showcase multiple different levels, although you can get different looks for the figure. Let's check out Drift after the break and see why he's one of the best figures from the newest series of figures... 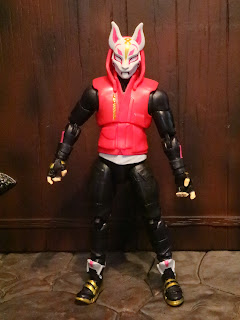 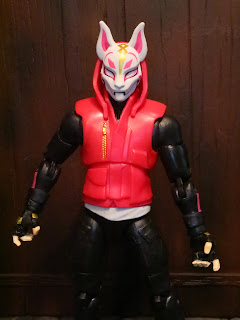 
* Underneath his coat (the figures comes wearing the coat in the package) Drift is wearing pinkish-red hooded vest over a black outfit. It's a really cool look and, honestly, I like the figure in this better than in the coat. There's some nice detail on the vest which really adds a lot to the design. I think that the vest is a "Stage 2/ Level 2" item for Drift in the game. 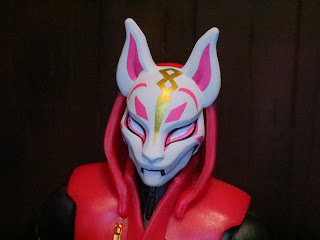 * Drift's mask is insanely cool and it kind of reminds me of a cross between Yokai from Big Hero 6 and the Keaton mask from The Legend of Zelda: Ocarina of time. It's something the character gets at stage 3 in the game and apparently there is a more normal headsculpt he uses prior to receiving this. The mask is removable and uses a standard face plate design like those seen with the Skull Trooper or Jonesy. 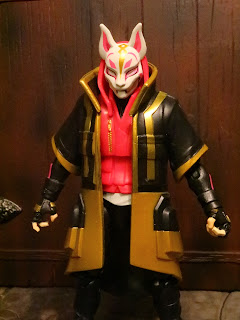 * Drift's coat is knee length and made of a soft, rubbery plastic. The texture reminds me a lot of the jackets from Mattel's WWE Elite series. Drift looks awesome in the coat and the paintwork overall is pretty nice, too. He gets the coat in stage 4 (whatever that means!) so you do get a chance to try some different looks for him. 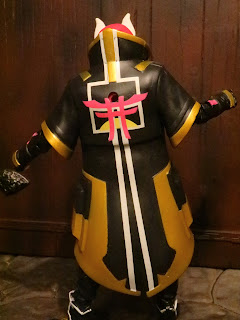 * The back of the coat has some fantastic paintwork and a cool kanji-like character emblazoned on the back. 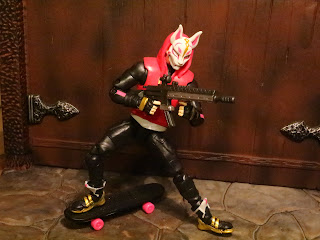 * Like the rest of Jazwares' Fortnite: Legendary Series figures, the articulation on Drift is incredible. He feels sturdy, durable, and has articulation that feels like it could give nearly any other modern line a run for its money. The inclusion of things like toe joints, lots of swivel hinges, double hinged elbows and knees, and butterfly pecs allow this guy to take some crazy poses. He can be very, very expressive! Even with his coat on he still has a pretty decent range of motion, too.

* Drift comes with some insanely cool accessories, one of which is the Back Board back bling. It's a skateboard and it actually works. You can use the foot peg to keep Drift on it or use the peg to plug it into the hole in his back. It has a textured deck and pink, rolling wheels. 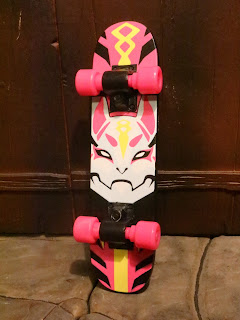 * Flip the board over and you can see some cool artwork of Drift's mask. Radical! 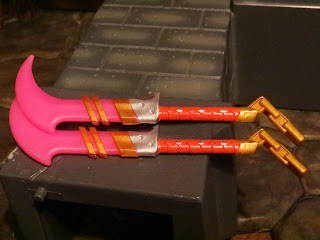 * Drift comes with two harvesting tools which, fittingly, are called Dual Edge. They're some sort of energized short blades with chains hanging off of the hilts. They look pretty nice with great paintwork and add a further splash of color to the figure. 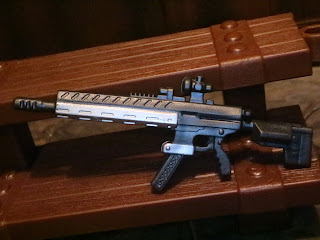 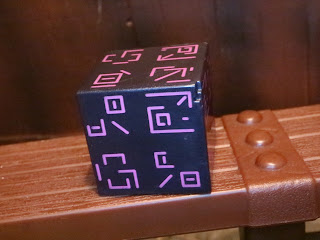 * Drift comes with the Tactical Assault Rifle, a weapon which also came with Molten Battle Hound. This is an incredible weapon that is actually based on the modified Sig Sauer used by John Wick in John Wick 3: Parabellum. 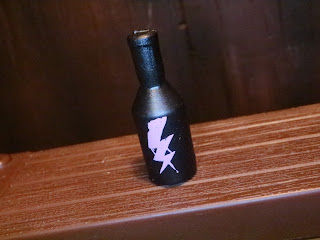 * Like Raven, Drift also comes with a Shadow Stone. The Shadow Stone is a fairly large, hollow cube that is covered with various arcane runes. There's also a small hole where Drift (or any character, for that matter) can place their thumb to be able to better hold the item. In game, the Shadow Stone allows a character to transform into a Shadow Form, but in the toy world this looks like a cool artifact that could chill out in the background of any archive of magical objects! 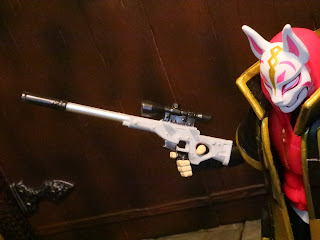 * And, like Sentinel, Drift includes a Storm Flip, a grenade like bottle that emits a small electrical storm. It's a simple black plastic bottle with a lightning bolt painted on and a hole for the figure's thumb as well.

* So...Drift comes with a sniper rifle it's really, really tiny. It turns out it's actually a sniper rifle from the 4 inch line. What? Why did this happen? What a weird mistake! 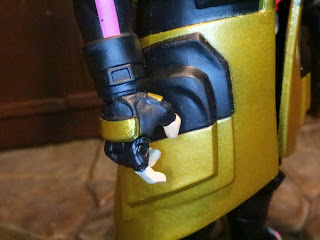 *   My biggest complaint with this line is still that Jazwares uses hinged fingers. The fingers move with one hinge and while they're not as problematic as the fingers on older Marvel Legends figures, I still don't like them that well. Drift's are better than some of the figures in the line bit worse than others. Please just go with regular hands, Jazwares! 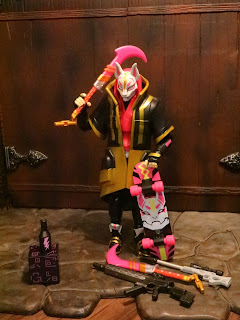 Despite the negatives I mentioned Drift is still a really, really good figure. He's easily one of my favorite from the line which surprised me as I wasn't really looking forward to him. Besides the stuff that I praise in most every other review of this line (plentiful articulation and lots of accessories), he's also got an awesome portrait, a functional skateboard, and the ability to be displayed a few different ways. I'm easily giving Drift an Epic rating. He deserves it! I still don't know why he has the teeny, tiny sniper rifle, though. He's so good, however, that it doesn't really dampen my love for this figure at all. Great work, Jazwares. Now please: Fix the hands on these and you'd have a strong contender for best action figure line on the market.

Hinged hands: Love them? Hate them? Tell us in the comments below!