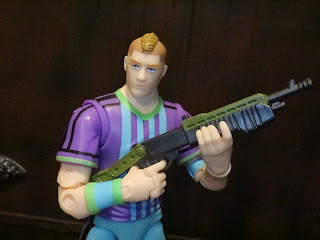 Full disclosure: I'm just not a sports fan in any way. I never really have been, either. That being said, it shouldn't come as any surprise that I typically find sports figures pretty boring. I mean... why? Anyways, today I'm checking out the Fortnite: Legendary Series Aerial Threat figure from Jazwares. In a line filled with space skeletons, sentient bananas, and killer tomatoes, a plain old soccer player is pretty dull. Fortunately, Aerial Threat comes with a nice complement of weapons that convinced me to pick him up. Still, though; couldn't they have went with one of the female soccer skins? That would have least made the figure standout more since Jazwares doesn't seem to have any interest in putting the women in the line. Hopefully that's somethin Hasbro will do better when they take over the 6-inch Fortnite license in 2022. For now it's still Jazwares' party so let's check out their take on Aerial Threat after the break... 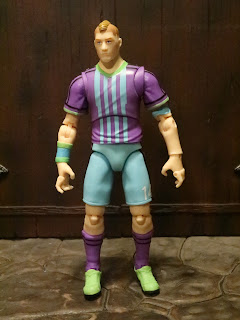 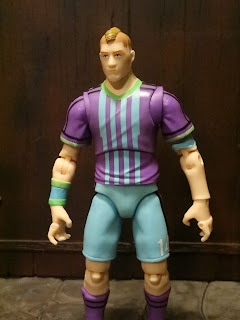 The Positives:
* Aerial Threat is decked out in a soccer outfit. I mean, it is what it is though the colors are nice and stand out. You've got purple, light blue, and bright green. He's got a nice spring look to him and the paintwork is neat and clean. There are also lots of details like the armband sticking out from under the left sleeve, the sweatband on the right wrist, and the #14 on his shorts. 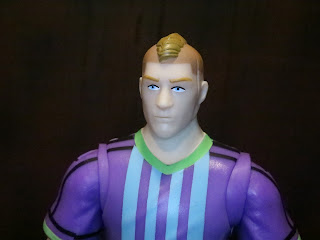 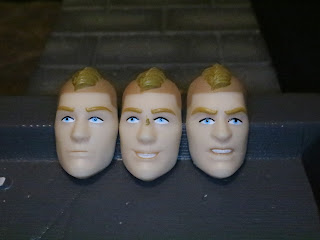 * Aerial Threat comes with three interchangeable faceplates to give you three different expressions. A standard face, a happy face, and an angry face. They swap out easily and stay on nice and tight. 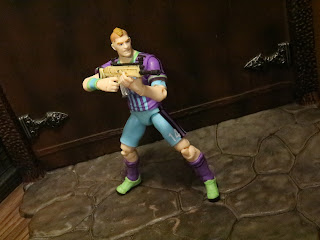 *  Like the rest of the Fornite: Legendary Series, the articulation on Aerial Threat is quite good. He feels sturdy, durable, and has plenty of points of articulation. The inclusion of things like toe joints, lots of swivel hinges, double hinged elbows and knees, and butterfly pecs allow this guy to take some crazy poses and uses two-handed weapons with ease. 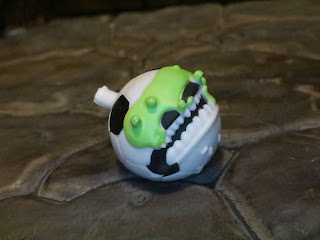 * Aerial Threat is a fairly plain figure overall but he does come with a unusual back bling: Zomball. Yes, it's a zombie soccer ball. Why? I don't know. It's pretty gnarly, though, with lots of teeth and a green ooze covering. I'm always impressed by how many paint applications Jazwares can give their accessories. They far surpass the work of most other companies in this area. 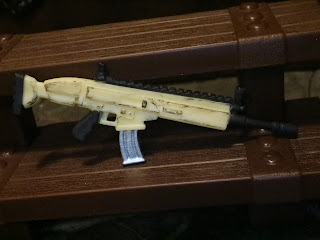 * We've seen the Siegebreaker, the Legendary version of the Automatic Rifle, quite a few times but it's still a great accessory with really nice paint applications. Seriously, the work on Jazwares' accessories is way better than what Hasbro, Mattel, and other companies offering 6-7 inch figures at mass retail are offering. 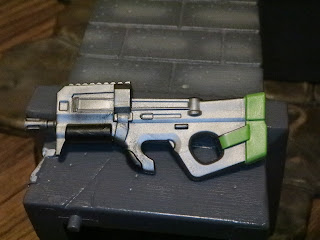 * Aerial Threat comes with another excellent weapon, the Epic and Legendary version of the standard Submachine Gun from the game. This looks like a modified version of the FN P90 with a cool new paintjob. I've commented before that there's something about the design of these weapons that remind me of the weapon models from GoldenEye 007 on Nintendo 64, so here's a good old RCP90 for you! 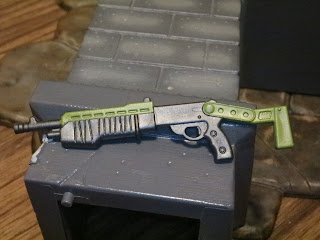 * Aerial Threat comes with a new weapon: The Legendary model of the Pump Shotgun. Based on the Frachi SPAS-12, this is a pretty nice rendition of the weapon in the stylized Fortnite aesthetic. I still always think of Jurassic Park when I see one of these! Just a note- I believe 8-Ball comes with this same weapon but I received Aerial Threat first. 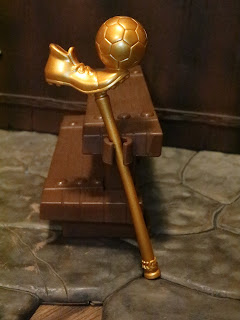 * The Elite Cleat harvesting tool seems to combine together a melee weapon and an athletic trophy, not unlike the trophy murder weapon in the modern versions of Clue. It's a nice looking piece with a fantastic metallic sheen to it. 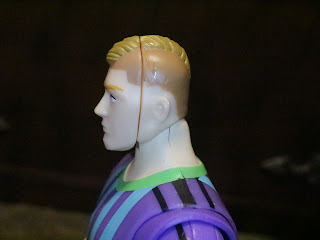 The Negatives:
* Aerial Threat's swappable faceplates are cool but they look awful from the side. Seriously, he looks like a Doctor Who villain or something. 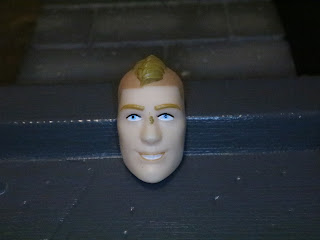 * Remember that episode of The IT Crowd where Roy goes on a date with feces on his face? Yeah, that's what it looks like here. Hey, messy paintwork will do that to you. 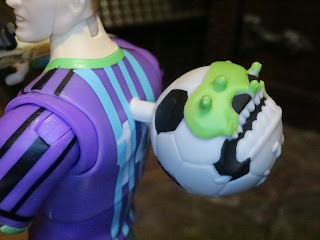 * Either Zomball's peg is a bit too large or the hole in Aerial Threat's back is a bit too small as there's no way the peg is fitting in there. If you can look closely you can see the peg shearing off part of the peg as it goes in. 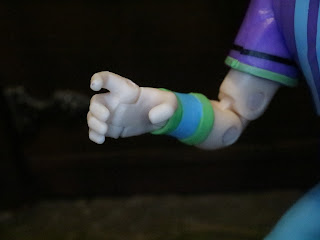 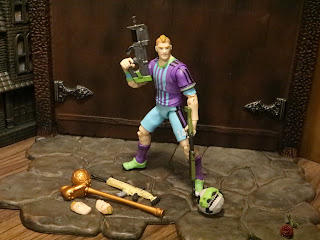 Aerial Threat has some issues for sure but he's also got a pretty nice arsenal of weapons. I'm not at all a fan of the design, being that I couldn't care less about soccer, but there's no denying that Jazwares did a nice job on the outfit. Despite my not being a fan of the sports theme of Aerial Threat he's still a Good and a 1/2 figure with some excellent accessories. What do you think? Are all of you soccer fans loving this guy or is he just a bit more dull than, say, a fast food mascot on a rampage?