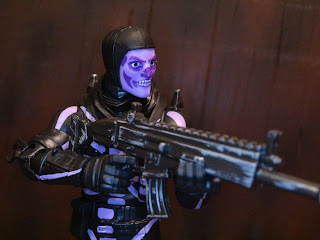 Guess what? Today I'm reviewing another action figure from a game I'm barely familiar with! This time it's the Skull Trooper (Purple Glow) from Jazwares' Fortnite Legendary Series line. Fortnite is a pop culture phenomenon and both Jazwares and McFarlane Toys have been putting out lots of action figure for it. Jazwares started off with 4 inch figures which, while very cool, are just in a scale I don't really collect anymore. McFarlane's figures are kind of cool too, and definitely a big leap forward for the company. I skipped them, though, as they just didn't grab my attention. When I heard about Jazwares Legendary Series of 6 inch scaled highly articulated figures, I decided to check it out. I haven't seen these anywhere yet except GameStop and on Amazon. I picked up this Skull Trooper a day or two ago from GameStop and, man, am I thrilled with him. Jazwares has really come out of nowhere with a figure that, quality wise and articulation wise, rivals what Hasbro is currently doing in this scale. To the best of my knowledge Fortnite doesn't have "characters." Instead, you just put different "skins" on for cosmetic purposes. Thus, this is simply a figure of a random guy in a tactical suit emblazoned with purple bones. It turns out that sometimes that's all you need for a compelling design! Let's check out the Purple Glow Skull Trooper after the break... 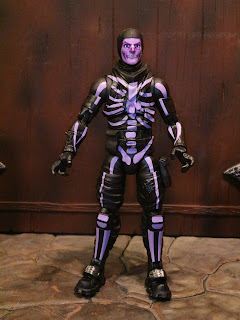 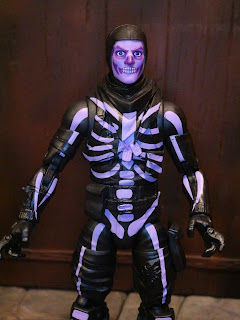 
* Like Scareglow, the Skull Trooper doesn't have any sculpted bones: He's simply a guy in a black tactical jumpsuit with purple bones painted on the outfit. Unlike Scareglow, Skull Trooper isn't supposed to be an actual skeleton. He took the tactical look of Simon "Ghost" Riley from Call of Duty and then went to the extreme. The outfit looks quite cool and has a nice complement of tactical pouches, pockets, and straps. The paintwork on the "bones" is really nice. He doesn't actually glow but he's still a pretty striking looking figure. 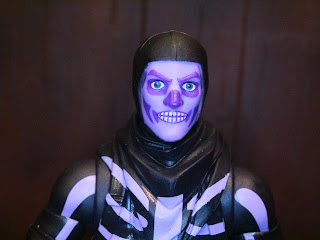 * The Skull Trooper has three interchangeable face plates. Yes, not alternate heads but face plates. The front half of the head is removable and swaps out very easily. The first face is a standard face with an intense look and a cool skeletal grimace. The paintwork is nice and it captures the cartoonish look of Fortnite while still being something that could fit in alongside your Marvel or DC figures as a random henchman. 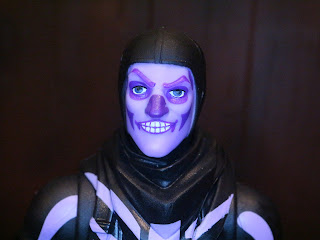 * The second faceplate features the Skull Trooper with a bit of a smirk. I like the arched eyebrows. 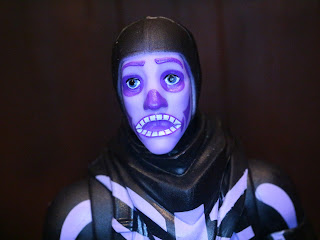 * Lastly the Skull Trooper has a face that looks frightened. It adds some nice variety to his looks and fits the often comical vibe of Fortnite. 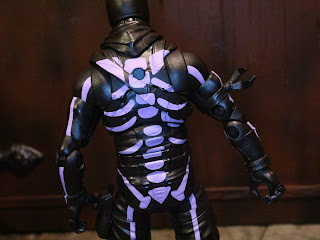 * The back of the figure is fully covered with "bones" as well. Again, you can see the various straps, pouches, and bandannas as well. Having this guy in hand makes me really wish that Hasbro would finally jump in and offer a G.I. Joe 6 inch line someday. 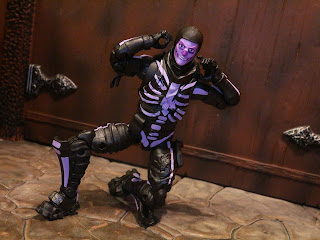 * The articulation on this guy is incredible. He feels sturdy, durable, and has articulation that feels like it could give Toy Biz's Marvel Legends line a run for its money. The inclusion of things like toe joints, lots of swivel hinges, double hinged elbows and knees, and butterfly pecs allow this guy to take some crazy poses and uses two-handed weapons with ease. 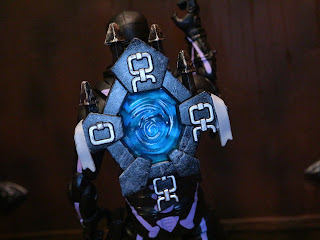 * The figure includes a backpack, or Back Bling as the game calls it. This one is called the Ghost Portal. It simply is a backpack that apparently is a portal to the world of the supernatural. The center is translucent, presumably so spirits can cross through as they desire. It's also covered with broken chains and has cemetery styled fence spikes on the top. The sides have a nice drybrushed effect as well to give it a weathered, worn look. 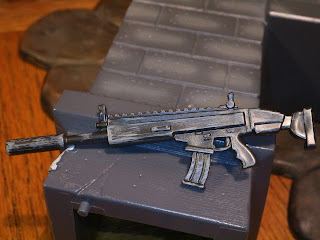 * The Skull Trooper comes with an assault rifle that has a great dry-brush effect while also retaining the somewhat animated appearance of Fortnite's weapons. The sculpt is nice, it's a solid feeling accessory, and it looks great with the figure. 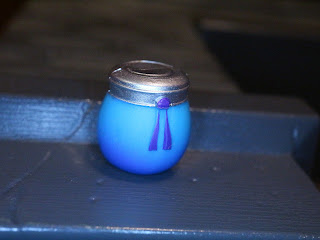 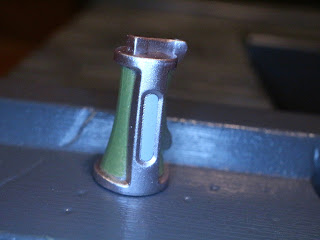 * The second accessory is a grenade. It has multiple paint apps, can fit in the Skull Trooper's hand, and just looks kind of cool. 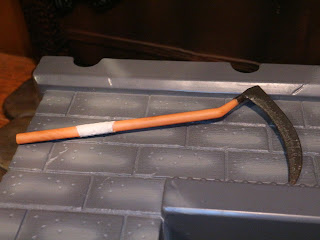 * The last accessory that the Skull Trooper includes is called The Reaper. It's his harvesting accessory and it looks really cool. Easily one of the coolest looking scythes I've seen included with an action figure, especially because of the dry-brushing effect on the blade. 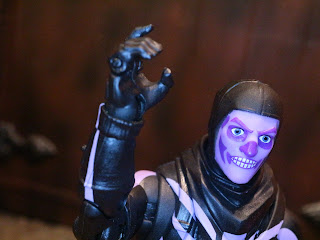 * My only complaint is that Jazwares went with hinged fingers. The fingers move with one hinge and while they're not as problematic as the fingers on older Marvel Legends figures, I still don't like them as well as the use of alternate hands. They have a fairly tight grip, but sometimes they're still tough to use. 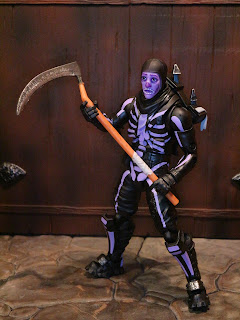 Jazwares just kind of came out of nowhere with the Fortnite Legendary Series and wowed me. This is an insanely cool figure. The quality is amazing. Seriously, I was surprised by how good this figure "feels." Even though I haven't really played the games (I've tried Fortnite once or twice), recently games like Overwatch and Fortnite have had incredible character designs and fantastic toylines that have really appealed to me simply on those merits. This guy is loaded with accessories and definitely feels like an Epic figure, especially for $20 bucks. You're getting a value here compared to much of what else is out there. It's also a great way to hopefully get more kids into action figures. Action figures over the past few years have had to appeal to older collectors or super young kids who can't play video games yet, so hopefully the Fortnite and Overwatch toys will inspire kids to pick up a good old fashioned action figure and learn the true meaning of "collect them all."

This is the first Skull Trooper figure I've reviewed on the site.
Posted by Barbecue17 at 7/07/2019