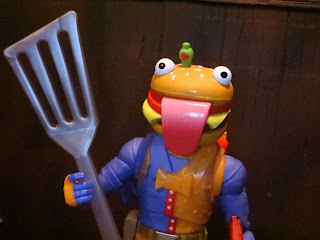 A new set of Fortnite: Legendary Series figures by Jazwares have dropped over the last week or two and I'm going to start making my way through them! The new set features Sentinel, Ruin, Galaxy, and Beef Boss. Beef Boss is today's review subject and, let me say, he's pretty cool. He's pretty wacky, too. Fortnite really mixes up their character selection and Beef Boss absolutely feels like he wouldn't be out of place in McDonaldland. Maybe he could be Mayor McCheese's enforcer or something? In Fortnite Beef Boss is part of the Durrr Burger set which includes lots of other fast food themed items and skins. I kind of want a Sizzle Sgt., too. She'd just be so cool and random, right? I mean, how many gun toting fast food workers are in your toy collection? Let's check out the Beef Boss after the break... 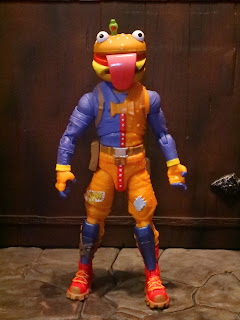 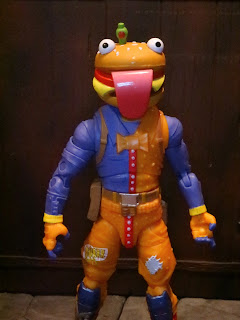 
* Seriously, is this guy crazy or what? I love his garish blue and orange color scheme! You might think that he mostly shares the standard Fortnite body parts but you'd be mistaken. His arms and boots might be reused but everything else is completely unique to him. Take a closer look at the orange parts of his outfit and you'll see that Beef Boss is covered with little dots. Those are sesame seeds! He's rocking a sesame seed coated outfit. Pretty cool, huh? 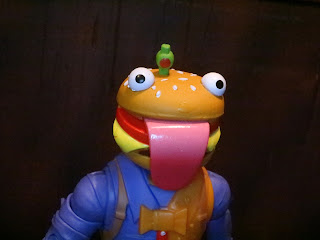 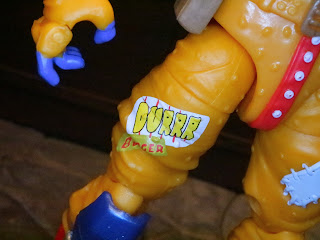 * Beef Boss is sporting a logo for Durrr Burger on his right thigh that's quite nicely applied. 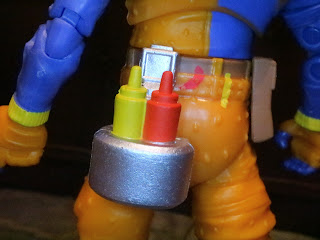 * He's also rocking a belt pouch on his right hip and a container carrying ketchup and mustard on his back left hip. I love the little bottles of ketchup and mustard he's toting around! How cool of a detail is this? He's all ready for an Atomic Pepper eating challenge for sure. 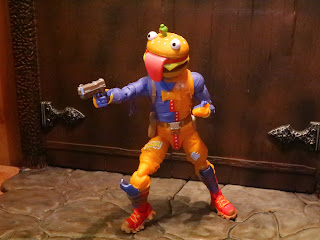 * Like every other figure in this series,  the articulation on this guy is incredible. He feels sturdy, durable, and has a number of articulation that feels like it could give Toy Biz's Marvel Legends line a run for its money. The inclusion of things like toe joints, lots of swivel hinges, double hinged elbows and knees, and butterfly pecs allow this guy to take some crazy poses and uses two-handed weapons with ease. Heck, even the finger joints, which I once complained about, feel tighter now. Beef Boss holds his weapons with ease! 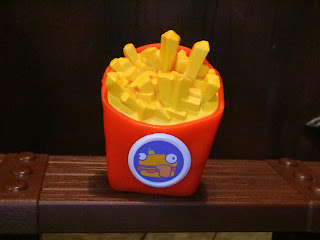 * Beef Boss' Back Bling is called the Deep Fried and it is a side of fries. A side of fries to go along with a giant hamburger. Get it? The fries are all nice and jagged looking while the Beef Boss' face is printed on the front of the carton. 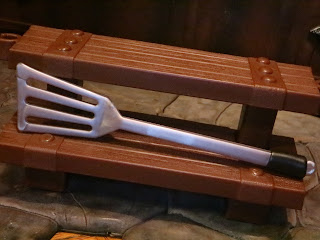 * I've never considered the need for a giant spatula to use as a melee weapon but Beef Boss' Patty Whacker has changed my mind. I'm going to run down to Spatula City and pick one up. Imagine getting smacked across the face with one of these? 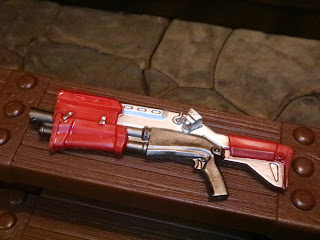 * The rest of Beef Boss' weapons and accessories are reused from previous figures, but that's OK since he already has so many new parts. His primary weapon is the Tactical Shotgun, which also came with Jonesy. It looks like a standard tactical shotgun but it has lots of extras including a more sophisticated stock and perhaps a screen of some sort on the right hand side. It's really nicely painted, too, and seems a bit brighter than Jonesy's. 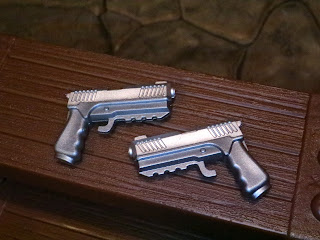 * Beef Boss also includes the same Dual Pistols as DJ Yonder. These are really cool little pistols with an excellent sculpt. While some of the Fortnite weapons look a little more stylized and cartoonish than others, these are some of the best sculpts in the line. These would look fantastic with the upcoming G.I. Joe Classified figures, wouldn't they? 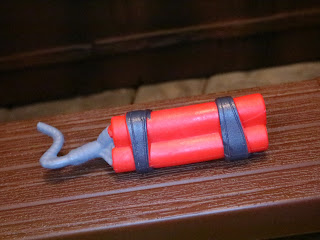 * If you're looking for something spicy then check out Beef Boss' sticks of dynamite. TNT, baby! This also with Crackshot, but can you ever really have enough dynamite? 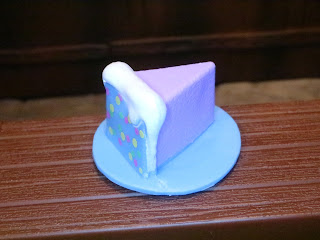 * Now, borrowing from Valkyrie, Beef Boss comes with a slice of cake. He really should come with a fried apple pie, shouldn't he? The cake is apparently a consumable item in the game that shows up from time to time and restores some health and some shields. It's a simple slice of cake with sprinkles painted on the edges. Dang, now I'm really getting hungry for a big piece of cake. 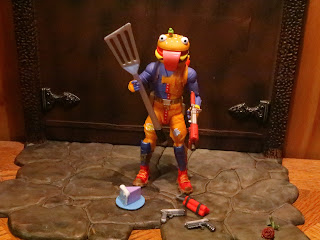 Beef Boss is another excellent figure in this line. He might not have the swappable faceplates that so many other figures have but he has a great headsculpt, a very colorful and unique design, and lots of solid accessories. He's lots of fun and whether you add him to your Fortnite: Legendary Series collection or use him as a random villain in any number of other toylines, you'll be pleased. He's incredibly fun and just might make you a bit hungry, too!