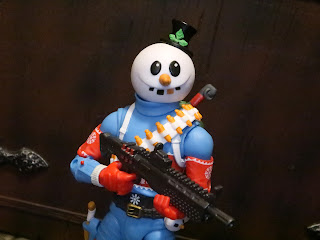 So wait.... this isn't the Winter Soldier?

No, of course not! This is the Slushy Soldier from Jazwares' Fortnite: Legendary Series toyline!  This guy was originally supposed to make it out in time for Christmas like Hasbro's Star Wars: The Black Series holiday figures but like so many Walmart exclusives it was delayed and didn't show up until around February. I guess you'll have to store him in the garage or carport for next year when you get snow, huh? The Slushy Soldier is a Fortnite skin originally from 2018 that depicts a snowman ready for battle. He's got a festive sweater, a gold tooth, and guns galore! Oh, and carrots. Lots and lots of carrots. Let's take a look at the Slushy Soldier after the break and see just how cool he is... 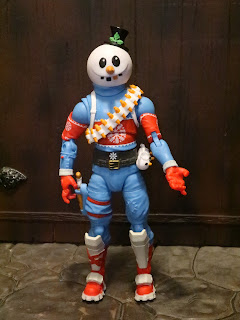 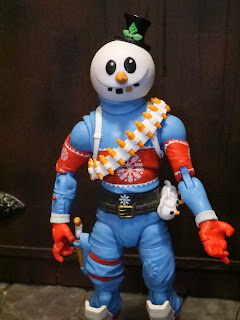 The Positives:
* Slushy Soldier is a really neat looking figure. He's much more than just a snowman in a festive turtleneck sweater. Where to start? First, let's check out the sweater, though. The snowflake pattern is very neatly printed on and also appears on his biceps. Secondly, he's got a bandolier of carrot shaped bullets across his chest (or are those bullet shaped carrots?). It's a separate piece but you'd probably have to tearing the bandolier or finding a way to remove his head to take it off. The paint applications are neat and clean all over Slushy Soldier and he's just overall a very appealing figure. 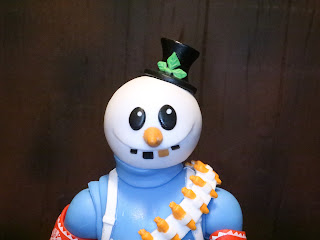 * His headsculpt is perfect! He's quite friendly looking with big eyes, a carrot nose, and a gold tooth. That's an odd detail but it sure does set him apart from the rest of the snowmen. The hat is perfect, too. It's undersized but very stylish with a sprig of some festive plant on there. 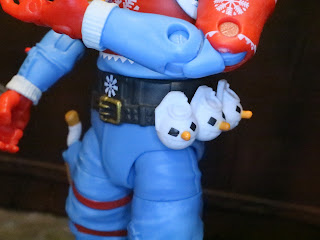 * On his belt (one of which is adorned with another little snowflake) are three snowman shaped grenades. Aren't these great? They're not just painted, either; they actually have little carrot noses on them. 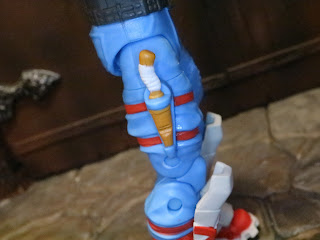 * On the Slushy Soldier's right hip is a terrifying carrot shaped dagger. Or is it a dagger shaped like a carrot? Is it a weapon or a snack? 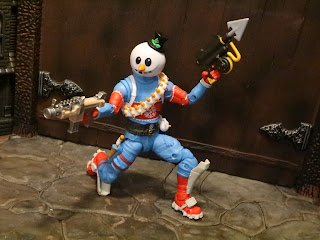 * The articulation on the Fortnite: Legendary is always excellent. These figures feel sturdy, durable, and they have articulation that feels like it could give Toy Biz's Marvel Legends line a run for its money. The inclusion of things like toe joints, lots of swivel hinges, double hinged elbows and knees, and butterfly pecs allow this guy to take some crazy poses and uses two-handed weapons with ease. 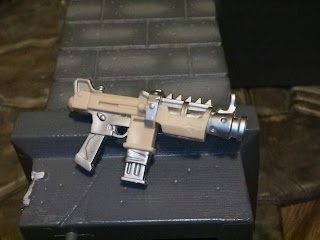 * The Tactical Submachine Gun looks like it ought to be packaged with one of the more Mad Max-styled figures rather than Slushy Soldier but whatever. This is a brutal looking compact weapon with some great paint applications and a seriously wicked design. It looks like you could use the top of the gun as a melee weapon of sorts. 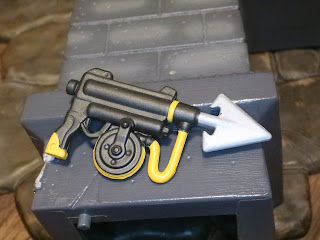 * The Harppon gun is also really cool. It doesn't fire or anything but it just looks fantastic. The black and yellow paint scheme would go well with a Batgirl or Batman figure. 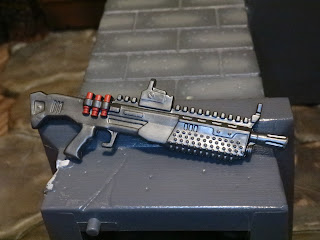 *  The Heavy Shotgun is one of my favorite weapons in tis line.  It looks to be sort of a hybrid of a few different shotgun designs, but the sculpted details, design, and the paint application of the six spare shells (three on each side) really is pretty awesome. Thanks to the design of the trigger guard almost any figure can hold this weapon well. 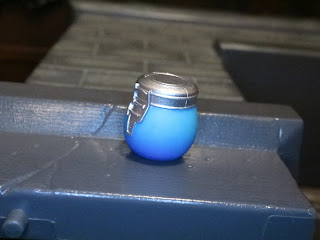 *  When he needs some defense Slushy Soldier can use his Shield Potion. Many other figures have included these but they're evidently a big part of the game so I guess having multiples is a good thing. It even has a nice divot in the side to so fingers can fit inside to hold it more securely. 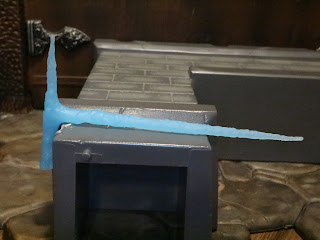 * Slush Soldier's harvesting too is a massive icicle like pick. It definitely looks cold and icy and it ought to be pretty useful for melee combat Die Hard 2: Die Harder called and it approves of this icicle like weapon! 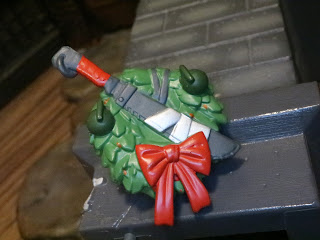 * How cool is this backpack? It's a Christmas wreath with a bow and some grenades and a... machete? Yup! It looks great on the figure and gives him a few more lethal weapons at his disposal. I love the paint work, too! So festive! 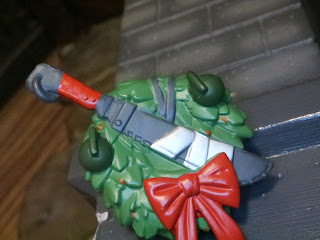 The Negatives:
* Wait, so why is this backpack listed in the negatives? Well, it's because the machete isn't removable. Y'all know how it drives me crazy when action figures have accessories permanently molded on them. Seriously, if a toy has been made since 2000 I just can't give it a pass on something like this. 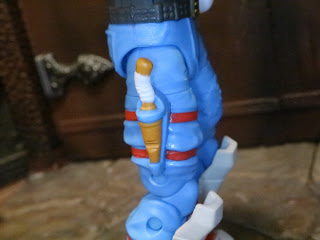 * Yeah, I'm going to complain about the carrot dagger, too. How cool would it have been if the carrot dagger had been removable? Alas, it's another great detail that the figure can't actually interact with. Boo! 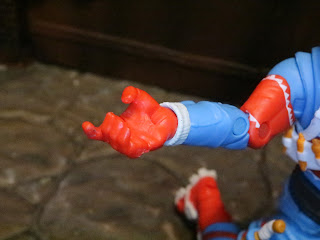 * One of the long running weaknesses of the Fortnite: Legendary Series is use of hinged fingers. While some figures have been OK with holding their weapons, many have had trouble. Unfortunately, the Slushy Soldier has a looser grip and has trouble holding certain weapons. Bummer. 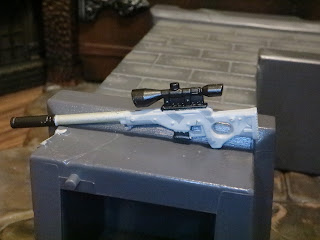 * Like Drift, Slushy Soldier comes with a sniper rifle that's scaled for the 4 inch figures. How weird is this? When it happened with Drift last summer I thought it was a bizarre mistake but here it is again! Slush Soldier looks like he's holding a kids toy when he's using this thing. 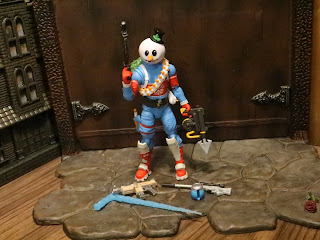 I really do like this figure but he has a few weird little quirks that keep him from perfection. He's still good, in fact I'd give him a Great and a 1/2, but I fantasize about how amazing he could have been with removable weapons and a correctly scaled sniper rifle. Walmart exclusives can be tough to come by and Slushy Soldier could have been ordered in small numbers and have already made his brief appearance in stores or he could show up in droves a month or two from now. Regardless of that, he's still a really good figure. With Hasbro set to take over the 6 inch line in 2022 this year is Jazwares' last hurrah with the Fortnite: Legendary Series and I hope they've got some good stuff planned.
This is the first figure of Slushy Soldier I've reviewed. For more reviews from the Fortnite: Legendary Series check out the following:
Abstrakt
Beef Boss
The Brat
Crackshot
DJ Yonder
Doggo
Drift
Enforcer
Eternal Voyager
Fishstick
Frozen Raven
Galaxy
Ghoul Trooper
Havoc
Jonesy
Legendary Loadout #1
Legendary Loadout #2
Leviathan
Molten Battle Hound
Omega: Max Level (Purple)
P-1000
Peely
Rabbit Raider
Ragnarok: Max Level
Raven
Ruin
Rust Lord
Sentinel
Skull Trooper
Skull Trooper (Purple Glow)
Tomatohead
Valkyrie
The Visitor
Wild Card
X-Lord (Scavenger)
Posted by Barbecue17 at 3/11/2021